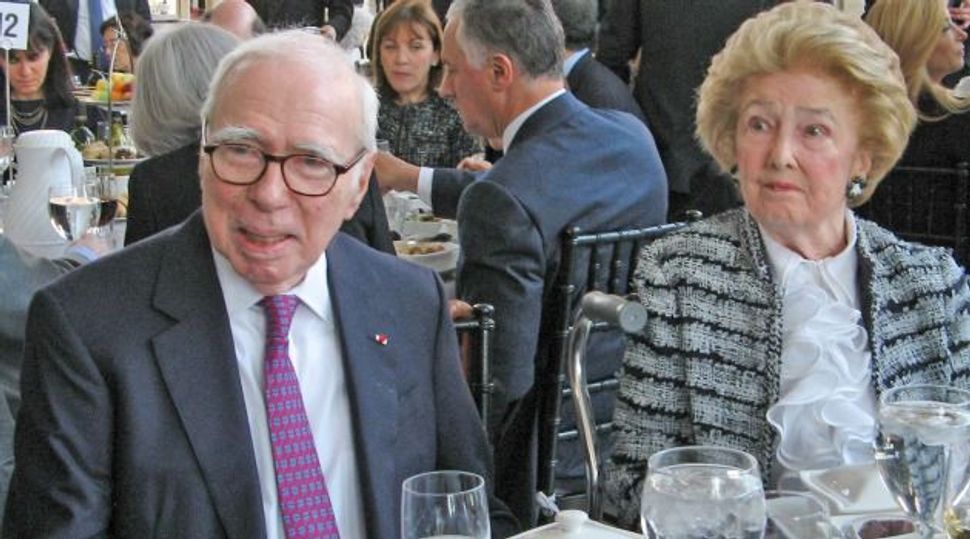 Truth be told I was reticent to attend the March 9 “Defiant Requiem: Verdi at Terezin” concert at Avery Fisher Hall — a shattering event which I had experienced two years earlier — and put myself through the angst of reliving my wartime childhood, and the fate of many of my friends who, though not victims at Theresienstadt, suffered a similar fate at the hands of the Nazis. Yet how could I not go? The performance by the 200-strong Collegiate Chorale plus 100 member orchestra under the baton of creator and conductor Murry Sidlin, Bebe Neuwirth as “The Lecturer” and John Rubinstein as Rafael Schachter — the Czech Jewish musician who created the remarkable Jewish prisoner-choir amidst the brutality of the Theresienstadt Concentration Camp during World War II was viscerally wrenching.

Sponsored by UJA-Federation of New York, Selfhelp Community Services and The Defiant Requiem Foundation, there were welcoming remarks by event chairs Carol Levin, and Patti Kenner,Stuart Kaplan,** CEO, Selfhelp Community Services, Eric Goldstein, CEO, UJA-Federation of New York an honorary chair Elaine Wolfensohn,and The Defiant Requiem Foundation board chair Stuart Eizenstat. The pre-concert reception honored Elizabeth and Felix Rohatynwho sat quietly as accolades flowed from the dais. In his bio, Felix Rohatyn — one of Varian Fry’s Jewish rescuees — it notes that his escape saga from Nazi-occupied France included “a German soldier’s decision to reach for a cigarette and absently waiving a car through a checkpoint outside Marseille in 1940.” Playing a key role in saving New York City from bankruptcy in the 1970’s, Rohatyn served as U.S. Ambassador to France under Bill Clinton, and remains a managing director of investment firm Lazard. Elizabeth Rohatyn has–in her own right–garnered awards for her work as a champion of education in New York City.

The text of the Requiem is part of the living liturgy of the Catholic Church, but Theresienstadt prisoner Rafael Schachter (1905-44/45) saw Verdi’s Latin masterpiece as a means of defiance and in 1943-1944, met trains arriving at Theresienstadt looking for “musicians.” Conducting ill, hungry choir members –often shipped off to other camps or extermination sites midst rehearsals — Schachter led his doomed singers in a “collective spiritual belief in their own humanity amidst the unspeakable violations perpetrated against them.”

In cameo screen recollections two women Theresienstadt survivors who had been members of Schachter’s choir credit him with their will to survive. Soprano Jennifer Check, Mezzo-soprano Ann McMahon Quintero, tenor Steven Tharp and bass Wilhelm Schwinghammer were stellar. The program included a WWII filmed performance at Theresienstadt during a Red Cross visit to the camp that had been transformed into “Potemkin Village “ of happy, sports-playing, well-fed prisoners” who–once the visit was over — were put on death–destination trains.

Verdi, “an atheist or agnostic,” premiered and conducted his version of the 500-year-old Latin Missa (‘Mass for the dead”) in Milan in 1874 and New York that year. At concert’s end it was requested there be NO applause as members of the orchestra and choir silently walked off stage and up the aisles to the clarinet strains of the Amidah’s ending —  Oseh Shalom — May He who ordains peace.