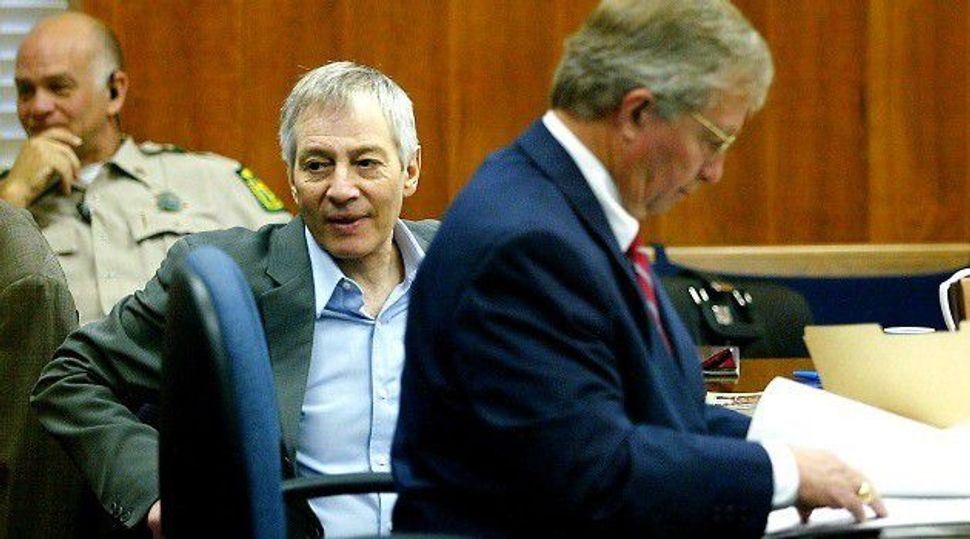 (Reuters) — Among the many questions raised by the dramatic conclusion of “The Jinx,” HBO’s six-part docu-series on suspected killer Robert Durst, was the issue of when law enforcement officials were made aware of the damning materials gathered by filmmaker Andrew Jarecki.

In Sunday’s finale episode, Durst appears to acknowledge his role in three murder cases that he has been linked to since 1982. The heir to a real estate fortune was arrested in New Orleans on Saturday in connection with the murder of his friend, Susan Berman, in Los Angeles in 2000.

“Killed them all, of course,” he says while talking to himself in a bathroom in a moment captured by the still-live microphone after he squirmed during an interview where Jarecki presents him with handwriting evidence pointing to his guilt in the shooting death of an L.A. woman in 2000.

“The truth is we hoped that Robert Durst would be arrested as soon as possible, and we were sort of amazed ourselves that he hadn’t be been arrested for so long, but the authorities were never communicating with us other than in their normal cordial way,” Jarecki admitted. “They were going through their investigation.”

He also clarified that he and his producing partner Marc Smerling discovered the bathroom audio tape of Durst “months” after the interview was first conducted, not two years later as reported Sunday night by the New York Times.

“We actually interviewed Bob Durst two times. The first time was for about three days back in 2010, and we were surprised that he made a whole bunch of admissions and said things that were kind of shocking and we thought we would go back to them again at some point,” Jarecki recalled.

“We went back to them again a couple of years later to show him this new evidence that we had discovered and we thought we were done at the end the interview and he reacted in a strong way to the material that we showed him and then he got up and said good-bye and we thought that was the end. But his microphone kept recording. We always leave the microphone on him. He knows that and he went to the bathroom while it was recording. It wasn’t until months later that we had an editor listening to material that we had left behind, thinking, ‘Now we have to listen to everything we got, we’re about to finish the series,’ and we discovered that we had this shocking piece of audio.”

Jarecki said he was also surprised when Durst agreed to cooperate with the making of “Jinx.” Durst’s relationship with Jarecki grew out of the director’s 2010 narrative feature, “All Good Things,” that was a fictionalized version of the Durst story.

“What’s amazing to me is that he came to us, knowing what he knew about his life. We didn’t know that. All we could do is assume that some bad things had happened. We weren’t exactly sure what,” Jarecki told “CBS This Morning.” “He volunteered to come and sit for an interview.”

Asked whether he thought Durst was mentally unbalanced, Jarecki said: “Whether he’s crazy or not, he is a very well-organized, well-financed person.”