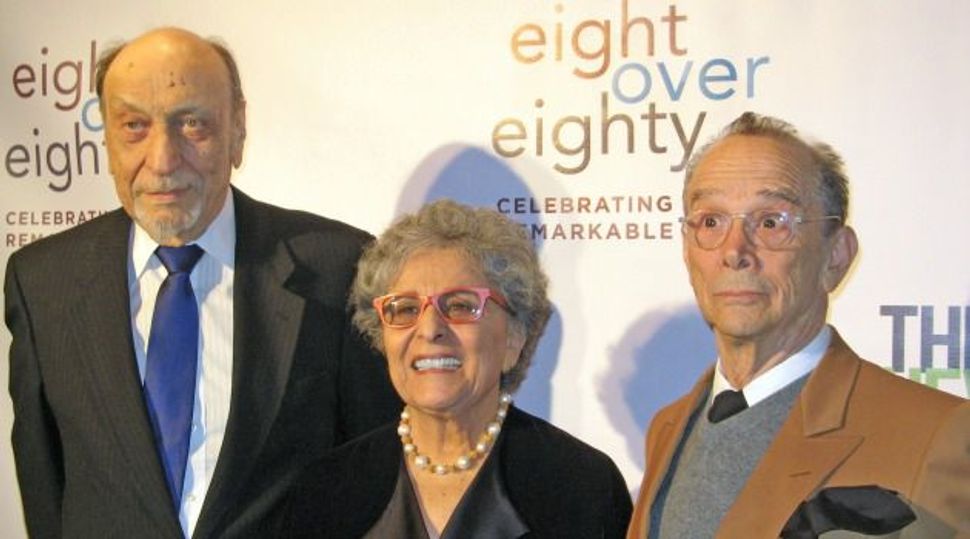 As you left the March 11 “Eight Over Eighty “ Jewish Home LifeCare Gala you had a smile on your face and a spring in your walk and the word “aging” had a new resonance. Welcoming the 450 guests at the Mandarin Oriental, Audrey Weiner, president and CEO, Jewish Home Lifecare, said: “By celebrating octogenarians and nonagenarians, we are changing the conversation about what it means to age in New York and indeed in America. ”

Honoree Oscar winner Joel Grey recalled: “Bob Fosse didn’t want me to play the part in the film version of ‘Cabaret.’ Fosse told the ‘mucky mucks’ at ABC ‘OK gentlemen — It’s Joel Grey or me.’” The verdict was: “Then it’s Joel Grey!’” Standing at his table in the middle of the ballroom, Grey then belted out the Kander and Ebb hit song “Vilkomen, Bienvienue, Welcome! Glucklich to see you, bleibe, rester, stay!” to cheers.

Celebrated graphic designer Milton Glaser recalled New York City of the ‘70’s when “people were desperate to get out of the city and the aggression–not to mention dog poop on the street — a manifestation of the city’s loss of belief in itself… A guy named Bill Doyle came to me and said ‘I have an assignment from the State to do a logo for a 2-3 week campaign — ‘we have the words — ‘I Love New York’ — we need the imagery.’” Detailing the creative journey that ended in the iconic “I Love N.Y.” logo — Glaser described his final version “with the heart as voluptuous and erotic…corresponding to the two lobes of the brain…The effect was part of the transformation of the City.”

Arlene Alda, photographer and author of 19 books, is seen in a video revisiting her Bronx roots: Barnes Avenue, the Payless shoe store once the Allerton Theatre, P.S. 76, the Mayflower Building where she grew up. “Whenever I come back to the Bronx I feel perfectly at home — In my mind I could live here again.” Watching husband Alan Alda schepping nachas, I recalled my first meeting with the Aldas in 1993 when —  honorees at another Jewish event —  Alan said: “My wife is Jewish, my three daughters are Jewish, and my grandfather told me that we came from Spain 500 years ago, settled in Italy so I think way back I was Jewish.”

Svelte, gorgeous nimble-fingered jazz pianist Barbara Carroll — seen in a video pounding the ivories at Birdland, jazz club informed: “Every time I sit down at the piano, it’s a new experience.” One of the first women to venture into bebop in the 1940’s, she mused: “at that time, nice Jewish girls weren’t playing jazz.”

Also honored were: Irwin Hochberg, whose credentials include UJA-Federation of New York chairman of the board, vice chairman of Anti-Defamation League; Charles Diker, chairman of the Board and founder of Cantel Medical Corp.; Pat Jacobs host for 43 years of “The Jewish Home Show”; and art collectors Fred and Rita Richman who are responsible for the Arts of the Island Southeast Asia Collection at the Metropolitan Museum of Art.

Elizabeth Grayer, Jewish Home Lifecare — Age Like a New Yorker Chairman of the Board informed: “The New Jewish Home embodies all of this New Yorky-ness in every part of our work-whether it’s in the homes of our clients, on the rehab floors of all of our facilities, in our senior housing programs, at the Sarah Neuman Small Houses or at any skilled nursing communities on our three campuses.