What Bibi Really Wants To Tell You 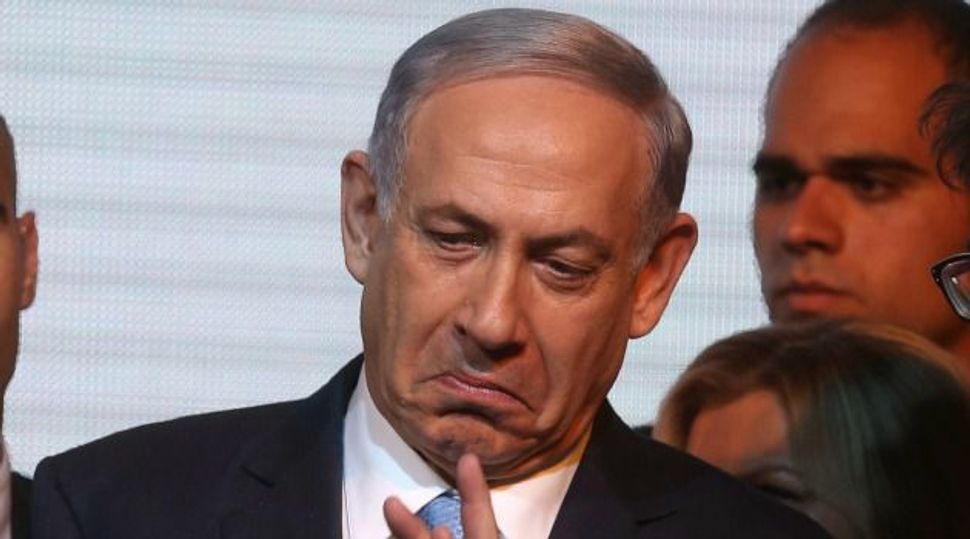 After receiving my congratulatory phone call and delightful shmooze with my close friend President Obama, I have chosen to reach out to you on the pages of my beloved Jewish Daily Forward.

Now let me cut to the real talk.

Some of my critics have cited my “outright rejection of a Palestinian state” and “racist rant against Israeli Arab voters” as evidence that I don’t deserve to represent Israel. What nonsense.

Yes, I said that there won’t be a Palestinian state under my watch and I warned Israeli voters that Arabs were being bussed to the voting booths by leftists. So what? I live in reality, and the reality of the Middle East is far different from Europe or America.

I look around and see an inherently unstable Middle East, with states disintegrating one by one and radical Islam on a rampage. So why should we believe a Palestinian state would be different?

Even in Israel there is great instability. Take me, for example: I dissolved the government and called elections because I thought I was a shoo-in, but then I was badly losing in the polls one day before the elections! If I hadn’t said those things about the Arabs and territorial compromises I might even have lost.

And just think about that! I had to say that my speech at Bar-Ilan University six years ago endorsing a Palestinian state, which was the basis of all subsequent discussions with the U.S. and Europe, has suddenly become “irrelevant”—you see, so unstable! And that was just a single speech. I once wrote a whole book with careful reasoning and very small type explaining why we can never, ever, ever negotiate with terrorists under any circumstances, but that also turned out to be irrelevant when I had to approve the Gilad Shalit prisoner swap with Hamas in 2011, and again when I decided to release dozens of Palestinian terrorists in 2013 rather than freeze settlement activity.

Even history is unstable, as I made clear when I said on TV a few days ago that Israelis who didn’t vote for my Likud party in 2006 caused the disengagement from Gaza, when it used to be a fact that the disengagement occurred in 2005 by a Likud government. If not for my vigilance who knows how many historians would continue to rely on the irrelevant facts and make one “historic mistake” after the next?

And this is all in Israel, the only democracy in the Middle East. Imagine how unstable all our neighbors are! As I like to say, if it looks like a duck, quacks like a duck, then…tomorrow it may be a nuclear porcupine.

So what is stable? Well, the Arabs. They hate us. I’m not a racist, of course, I just don’t like them and would prefer if they didn’t vote. What’s the big deal? They don’t like me and don’t want to vote for me, so I am just returning the favor. Nobody makes a fuss about what they say, but, well, I’m unfortunately used to being judged with a double standard.

Everything I have written here is the absolute truth, assuming it is still relevant when you read this. But who knows? The sands are shifty in the Middle East, and what kind of lunatic would give away territory in this reality?

What Bibi Really Wants To Tell You