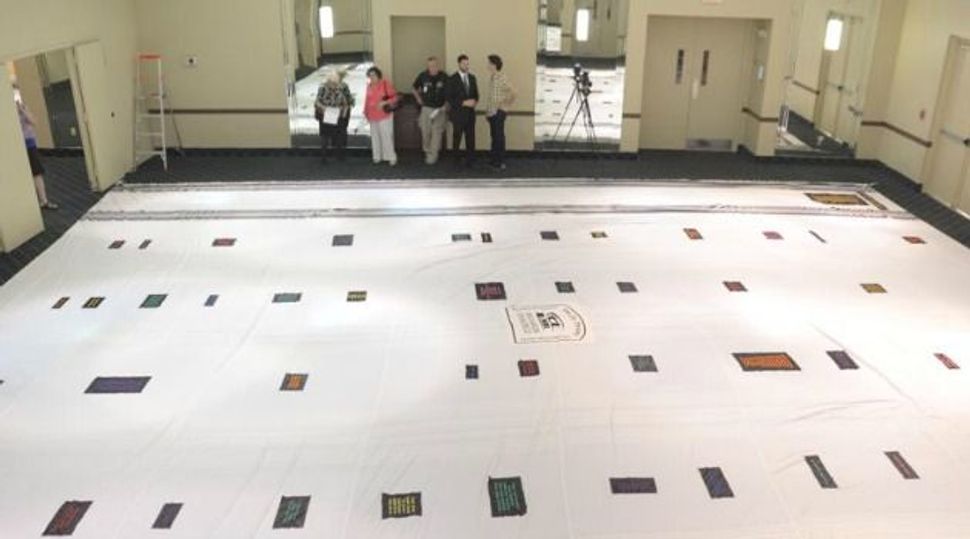 Jewish tradition: it’s beautiful and comforting but a bit too constricting, right?

Well, not anymore. The bookkeepers at Guinness just awarded the world record for “largest tallit (prayer shawl)”— measuring 1,471.74 square feet — to Boca Raton Synagogue, a Modern Orthodox shul. The Facebook post by Rabbi Efrem Goldberg announcing this amazing feat was first noticed by Tablet, so hats off to them for unearthing this gem. It’s official: Tradition is now roomier than ever.

What, you may ask, could such a large tallis be used for? Well, Rabbi Goldberg’s post suggests that it’s meant for “kol hanearim,” a ritual on the holiday of Simchat Torah in which the community children gather together under a banner of prayer shawls as they are symbolically called up to the Torah.

And there is some precedent for a massive prayer shawl: The Talmud (Rosh Hashanah 17b) teaches that the Almighty “wrapped Himself in a tallis like a prayer leader” to teach the Jews how to pray. The Jews of Boca may have finally come up with a decent copy.

Still, one wonders why they couldn’t invent something like this 40 years ago, when it might have been of use to Eddie Carmel, “The Jewish Giant.”

Interestingly, the enormous tallis is almost exactly the same size as the original Star-Spangled Banner, the huge flag that moved Francis Scott Key to pen our national anthem.

While I can’t say that this epic prayer shul has inspired me to write such an impassioned ode of pride and nachass, I can offer some wise words that all the guys in shul should bear in mind: It’s not the size of the tallis that matters, but the shuckel in your davening.