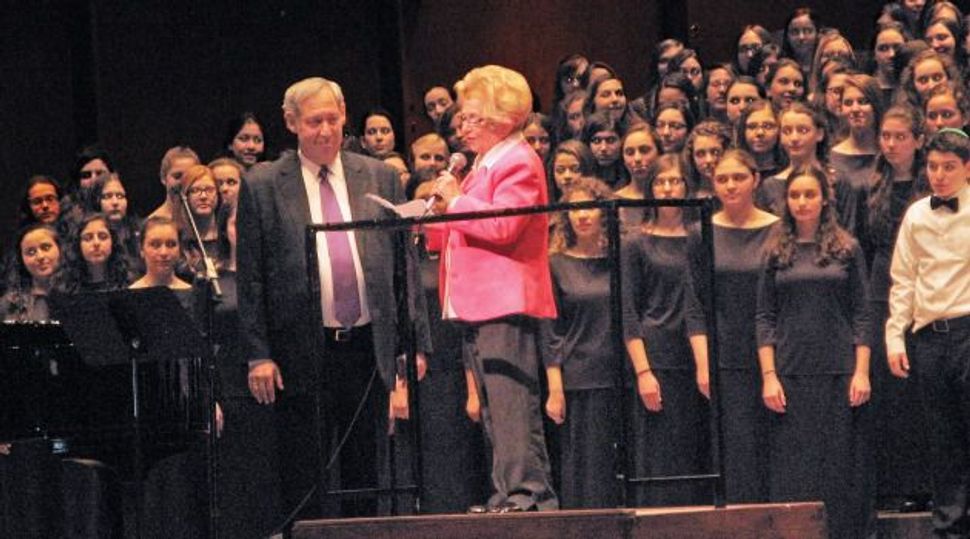 “How thrilling it is to have 350 Jewish teenagers (plus 50 alumni)! from America and Israel solidifying their relationship with each other and with the destiny of the Jewish People Zamir Choral Foundation founder and director ” Matthew “Mati” Lazar told me following the performance. “In an environment when the biggest challenge is getting Israelis to experience pluralistic Judaism — in Hebrew, English and Yiddish — and having Americans — especially of the next generation — experience Zionism —  Hazamir is able to meet both these challenges simultaneously while having fun as teens.”

Led by director Vivian Lazar the choir — composed of 21 U.S. and 5 Israeli chapters singing together on stage for the first time —  performed — among others — Robert Solomon’s “Peace by Peace” in English — a work with a 1970’s sound. There was the [Yiddish] “Strange Happenings: The Holy Days Misfortunes of “Avremele, [Der Melamed] The Teacher” and–bringing the audience to its feet, a tribute to “Golden Age” of legendary chazzan Moyshele Oysher’s “Chad Gadyo” (arrangement by M. Lazar) by possibly chazzonim-to-be trio Nathaniel Bear (HaZamir Long Island), Samuel Dylan Rosner (HaZamir Westchester) and Abram Foster (HaZamir Baltimore).

The event was also the setting for the World Premiere of Gerald Cohen’s “L’dor VaDor” (from generation to generation) which had been commissioned through the Jeanne R. Mandel Fund for New Music with the HaZamir choir conducted by Kelly Shephard and Philadelphia cantor ***|*Gerald Cohen** at the piano.

In a you-can’t-miss-her hot pink jacket, honoree Ruth Westheimer — standing on the podium on stage with a backdrop of black/white robed performers– declared: “Receving this award would be enough — dayenu” — but the thrill of standing in front of these 350 talented singers from 21 cities in the U.S. and five [groups] from Israel — whose passion, joy and gorgeous voices filled the hall — was an incomparable moment.”

Presented with a painting — almost as big as she is — by noted artist Mark Podwal,Westheimer declared: “There is a mission that speaks — or shall I say — sings to me. At once transported back to my childhood and — far forward, to a Jewish future of proud, knowledgeable and remarkable talented singers and leaders—  this is the magic of Ha-Zamir. I am proud of their musical excellence and optimism, and grateful for the opportunity to share the joy with everyone in the audience.”