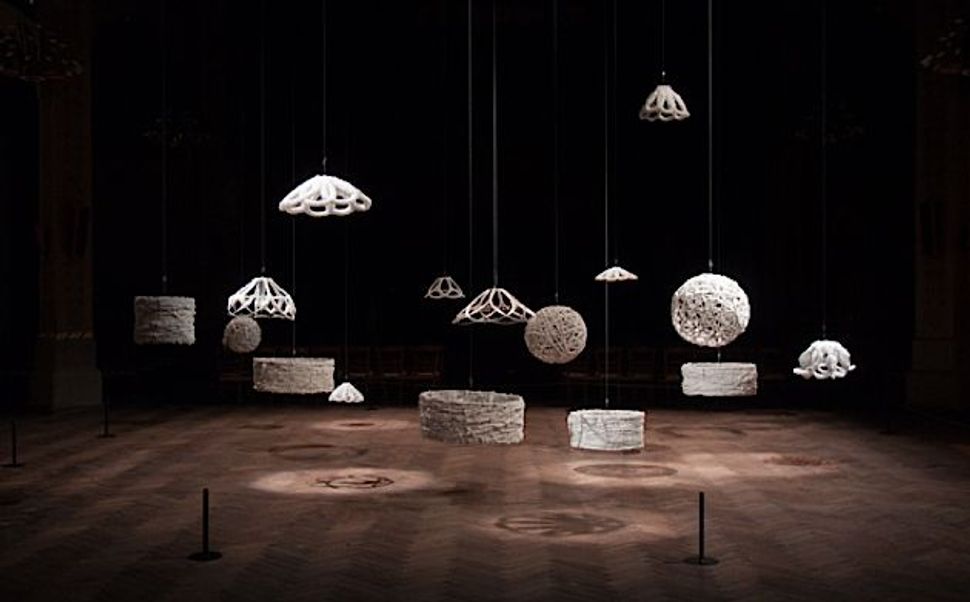 Sigalit Landau is known for provocative work, like the notorious video piece that showed her spinning a barbed wire hula-hoop, naked.

But Landau’s new show might be her saltiest yet.

The haunting assemblage of objects in “Snow in Jerusalem,” which runs through April 25 at Toronto’s Olga Korper Gallery, includes a bridal gown, violin, and fishing net completely encrusted in gleaming white salt crystals from the Dead Sea.

While the works weren’t created with the Canadian city in mind, “ice, snow, and salt have meanings in Toronto that might have brought some kind of additional value,” Landau said. “Things have different meanings in different places. In Toronto, the work has its own radiance.”

It took years for Landau to perfect her technique of encasing objects in the Dead Sea’s mineral-laden salt; the effect is hypnotic, and a little disconcerting. “When something gets filled with crystals, it becomes part of memory, dysfunctional and quite beautiful,” she said. “I put the violin under the water for several months in the summer until it became encrusted. For the wedding dress, I copied a black dress that was used in a production of ‘The Dybbuk.’ I put it in the Dead Sea; we took high-res video of how this black dress transformed into white. It ended up weighing 300 kilos.”

The Dead Sea looms large in Landau’s new work. “It’s so close to Jerusalem, where I grew up,” she said. “It’s like being next to a volcano. Or an anchor — an archaic anchor. It grounds me.”

Landau, who represented Israel in the 2011 Venice Biennale, was born in Israel to immigrant parents. Her mother was the daughter of Viennese refugees in London, and her father survived the Czernowicz labor camp in what’s now Romania. “I grew up bi-lingual, multi-cultural, on a hill overlooking the Judean Desert, the skyline of Jordan, and the northern part of the Dead Sea,” reads her online bio. The Landaus moved around the world throughout her childhood, including stints in Philadelphia and London. “We always had one leg here, one leg there,” she said. “My mother never spoke Hebrew properly.”

Not surprisingly, much of Landau’s work also confronts the notion of home and belonging, like the brightly colored compact heating units in “Snow in Jerusalem” emblazoned with slogans like “Go Home,” “Home Sick,” and “Home Alone.”

“Everything else in the show is outdoors, nature, extreme places, public places,” Landau said. “These are intimate things waiting at home. They have no heat, but look warm. It’s the concept of home.”

But Landau bristles at suggestions that her work might carry overtly political overtones. “My work is poetic, physical, and tactile. It’s not people dealing with people dealing with concrete political problems and solutions. I’m not Yael Bartana,” Landau said. “My new video work in this show [“Knafeh”] depicts someone making an Israeli pastry — it’s me being fascinated, seduced. It’s a more social and cerebral take on the world.”

“Snow in Jerusalem” marks Landau’s second visit to Toronto, and the second time Canada’s largest city has been the only place in North America to see one of her shows. Her exhibition “Moving to Stand Still,” which included that infamous hula-hoop video, had an exclusive run at Toronto’s Koffler Centre for the Arts last year.

“Her work’s very touching and poetic. It moves me,” said Olga Korper, the A-list Toronto gallerist who coaxed Landau back to the Great White North. “I was on the advisory committee that chose her for the Koffler. When I saw that show, I fell in love. Sigalit came into the gallery last year, and loved my space. We also liked each other immediately. So we plotted and planned. And it turned out spectacularly.”

“Snow in Jerusalem” is just the tip of a very busy year for Landau, whose next project will take her to Montreal. “I’m going to install a bomb shelter at the Museum of Contemporary Art,” she said. “It’s an obsolete Tel Aviv shelter that I copied.” After that, she’ll head to Marseilles for Cellule 516, an invitation-only project that encourages artists to engage with rooms in a 1950s Le Corbusier-designed housing project. A gallery show in Tel Aviv will follow later this year. For now, she’s thrilled with how “Snow in Jerusalem” turned out.

“It’s been a joy to work with Olga. And I can’t even begin to express how beautiful the gallery building is,” she said. “I’ve been enjoying every minute.”