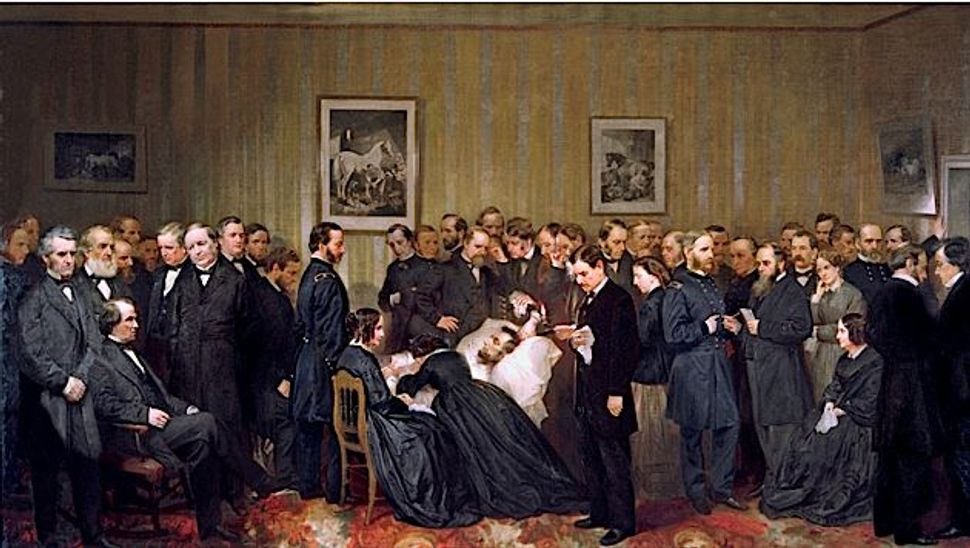 Harold Holzer’s having a big year. “Lincoln and the Jews,” a new exhibition he helped assemble, is on through June 7 at the New York Historical Society in Manhattan. His book “Lincoln and the Power of the Press: The War for Public Opinion” (Simon & Schuster) just won the $50,000 Gilder Lehrman Lincoln Prize, awarded annually to a scholarly work on Abraham Lincoln or the American Civil War era. And Holzer himself shook up the art world by announcing his retirement from the Metropolitan Museum of Art, where he’s been a highly respected public affairs official for 23 years. The Forward talked with Holzer about the New York Historical Society show — and Lincoln’s unusual affinity for Jews, who made up a tiny American minority in his lifetime.

The exhibition gathers original documents, artifacts, photos, and Lincoln’s own writings, many from the private Shapell Manuscript Foundation, which collects original manuscripts and historical documents related to both Jewish and American life. “This show is not just for Jewish visitors,” Holzer said. “I don’t think we’ll get the chance to see this much treasury in one place again, if ever.”

Michael Kaminer: Was there anything that surprised you — one of the world’s foremost Lincoln scholars — as “Lincoln and the Jews” came together?

I didn’t entirely appreciate that the Shapell Foundation had saved and amassed, in one searchable place, so much of the documented history of Lincoln’s relationship with the Jewish people. But there were other things, too. I hadn’t thought about Dr. Charles Liebermann, who was at the President’s bedside when Lincoln died. He’s even in the Alonzo Chappell painting of Lincoln’s Deathbed. Here’s a Jewish ophthalmologist called in because of an alarming discoloration on Lincoln’s right eye. Lincoln’s turned away in the painting, so you don’t see it.

And I didn’t know one of Lincoln’s public letters. They were the equivalent of how candidates bypass the media today to get the news out. One of Lincoln’s most famous public letters was to Governor Michael Hahn of Louisiana, which was then under Union occupation. Lincoln urged Hahn to “keep the jewel of liberty” and start giving African Americans the right to vote. I didn’t know Hahn was Jewish.

The exhibition seems to make the case that Lincoln’s affinity for the Jews had roots in his lifelong reading of the Old Testament. Is that the case?

He read the Bible daily, sure. But he grew up in the Baptist tradition, which doesn’t have a lot of room for Jews or people who haven’t seen the light. His religious views are still the subject of debate. He knew the Bible, knew both Testaments, and used both Testaments. He cited Leviticus and Psalms of David in his second inaugural. He wasn’t reading the Old Testament exclusively, but it did introduce him to certain stories. At this time of year, people should be reminded that — happily — he was interested in the Exodus story.

At the time he served in office, how risky was it to embrace Jews the way Lincoln did?

Well, it certainly wasn’t as risky as an over-affinity for African Americans in Central Illinois. You have the fact that Jews are increasingly joining the Republican party, and are useful allies for him. You can also use the cliché that everybody knew a Jewish merchant, tailor, or attorney. They were getting to be more present in society. So it wasn’t necessarily a risk in his earlier career.

But later, in confronting deeply entrenched anti-Semitism in the military, it was much more delicate. The military didn’t like Jews — it’s that simple. Sherman really hated Jews. Grant didn’t like Jews. McClellan hated Jews. Lincoln had to balance his desire to win battles with a sense of fairness. This show goes beyond the “some of my best friends are Jewish” argument to delve into gut-wrenching issues that could have gotten Lincoln into trouble with military, on which he depended.

How did he go about confronting that culture without alienating military leaders?

Lincoln signed a chaplaincy law, for one thing. Chaplains had to be ministers of some Christian denomination. When rabbis tried to hold services for Jewish troops, they were thrown out of services, or the services were broken up. At some point, they started holding services on Sunday. Lincoln agreed to push for an amended law to let any ordained chaplain into the service. He was explicit: When people in battle are dying, or need succor or last rites, he wanted Jewish soldiers to have the same rights as anyone else.

Lincoln also managed to countermand General Grant’s order banning all Jews from his military department, which was almost like instigating a pogrom in Kentucky. Grant conflated “peddlers, speculators and Jews” as anti-Semites often do. It was tough for Lincoln, who didn’t have many winning generals. Grant won the battle of Shiloh. How do you handle this without humiliating him? You make sure the order is overturned without leaving any embarrassing fingerprints on it. And that’s what Lincoln managed to do.

The show touches on Lincoln’s relationship with Issachar Zacharie, his Jewish chiropodist, calling Zacharie “eccentric.” Who was this character to Lincoln?

Lincoln thought Jews could be in the vanguard of returning loyalty to the Union in formerly Confederate places. I’m sure he was aware that the highest-ranking Jew was Judah Benjamin. To make Jews loyal, he had to make connections to decency and fairness. He thought Zachary could be a kind of envoy. Zachary was a huge self-promoter who said he had connections. Lincoln gives him passes to travel all over the place. He’s a controversial figure. Clearly, he got rid of Lincoln’s bunions or corns or whatever those repulsive things are called. But how much of his work was self-promoting and how much was designed to help Lincoln, I don’t know, and we’ll never know.

The show opened just before Passover. Are there connections we can draw between Passover and Lincoln’s story?

There’s a huge connection to Passover beyond what the show says. Lincoln was killed on Good Friday, so his life was celebrated at Easter Sunday masses as a resurrected president, a savior who died for America’s sins, with allusions to the life of Jesus. Because it was also Passover week, the Shabbat service that Saturday was a particularly resonant one. Jews were actually the first to mourn in their houses of worship. He became a Jewish martyr before he became a Christian martyr. Rabbis — and there are books and books of these sermons — all made comparisons to Moses. Lincoln was man who had proclaimed liberty throughout the land, and led people to the Promised Land, but was not permitted by God to see the Promised Land himself. In that way, he was America’s Moses.