What Do Passover and ‘Downton Abbey’ Have in Common? 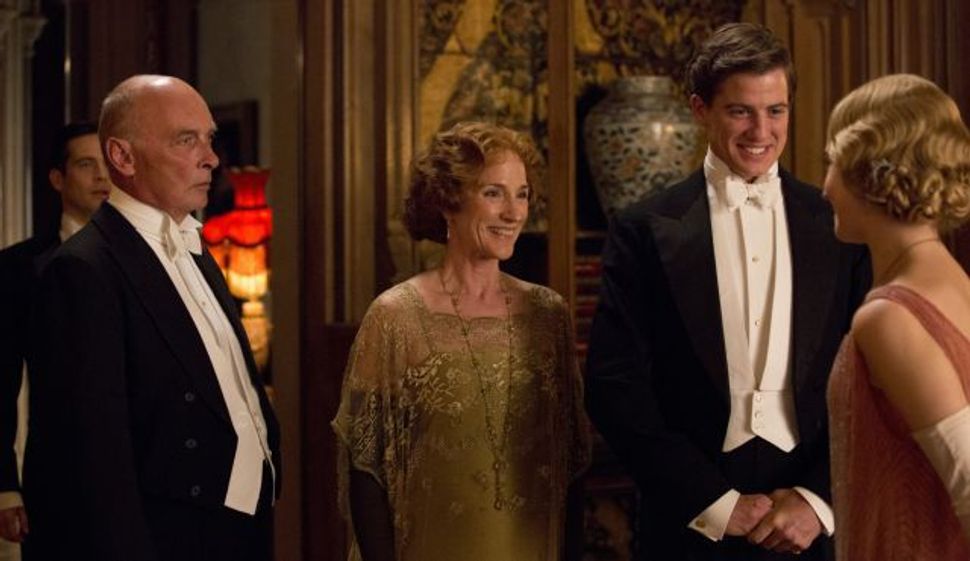 A disapproving Lord Sinderby (left) with his wife and son, who married a Grantham lass against his father’s wishes.

Once, when radio days were young, there was a silly — but funny — explanation about how radio works: “Imagine a huge dog with its head in Tel Aviv and its tail in Jerusalem, and when you pull the tail in Jerusalem it barks in Tel Aviv. Well, radio is pretty much the same, but without the dog.”

The same goes very much for scheduled live TV broadcasts of wwi (world-wide-interest) events, like the Olympics, the Superbowl and the Oscars. The billions of viewers all over the world glued to their screens at the same time are the wagging (or wagged) tail of the missing dog, and the event is the head, or the other way around.

The Passover meal of which we will all be partaking tonight – except those of you who will be watching TV for some reason that eludes me – is very much like radio and live global TV events: a huge worldwide community composed of families and individuals of Jewish origin, descent, heritage, persuasion and faith sitting together, roughly at the same time, around tables, reciting the same partly abstruse text, and cracking very much the same jokes as they did the same time, last year. To say nothing of the dog.

Passover is supposed to be a holiday of new beginnings, freedom and renewal, and a family event with all its traps and trappings. But this time, for the fans and addicts of TV series on family affairs, it spells the untimely ending of one that had the feel of being eternal: “Downton Abbey” will cease to exist at the end of season 6, next year.

Here you may object, saying that I am forcing a world-renowned British TV series on matters and manners (and manors) into some kind of Jewish holiday column. Possibly, but I have to point out that there is more than one Jewish note in the Downton Abbey symphony of voices. Lady Grantham, born Cora Levinson, was accepted into the Grantham fold thanks to her much needed dowry; in season 5 a Grantham lass was wed to a Jewish boy, and his father, Lord Sinderby, did not approve, to put it mildly.

“Downton Abbey,” created in 2010 by Julian Fellowes (who was interviewed by Haaretz recently on his visit to Israel), follows the goings on upstairs and downstairs in an aristocratic British family. It starts with the sinking of the Titanic and ends in the year 1925 in season 6, with social changes and historical and private events wreaking havoc with everyone’s perceptions of what is up or down (and right and left, of course).

It is arguably the most successful British TV show in recent years, with a bunch of nominations and prizes from all kinds of acronymic organizations (BAFTA, Emmy, Grammy) on both sides of the Atlantic. It is classy, impeccably acted, relatively kind to the upper classes (they come across as human, lovable, and honestly striving to come to terms with the fact that class is losing its distinction).

One could go on and on about the various characters, each one with his or her story fleshed out and intertwining with the others; or mention famous actors popping in and out – Shirley MacLaine as Lady Cora’s mother, or Dame Kiri Te Kanawa as Nellie Melba. But let’s not kid ourselves: We all love and watch “Downton Abbey” because of Maggie Smith, who plays the Dowager Countess Violet Crawley, and is – by her sheer presence on the screen – the series’ anchor, core and center of balance.

The series is very much about social and moral conceptions being shaken and reshaped, with preconceptions having to be readjusted to changing mores and ideas in flux. Most of the characters live through it; they react and overreact, but whatever happens, they must act. Only the dowager countess, who belongs to the past but is still very much with us in the present, is exempt from acting. She observes; she takes the situation in. She may disapprove, but she accepts. There are moments when she seems to be from another era, puzzled by the strange things going on around her, but in a flash she may deliver the most lucid, up-to-date and straight to the point remark that sets all aright.

I assume that this was her character as written and intended to begin with. But it needed an actress of Smith’s persona and stature to endow it with the life it has acquired on the screen. I’m pretty confident that as much as the series’ plot was guided by its actors’ careers (two major characters were killed off in season 4 due to the actors’ plans) some of it was shaped by the extraordinary personality of Dame Maggie.

Her presence in the series reminds me of the part and value of another actor, of a different generation, in a British TV series of another generation: Smith is to “Downton Abbey” what Laurence Olivier was to “Brideshead Revisited” (and she was Desdemona to his Othello at the National Theatre in the 1960s).

In a way, Dame Maggie Smith does not need words; she can fix anyone and anything – the viewers, other characters or a plot twist – with an icy stare. In a changing world she remains unfazed, unruffled, calm and unperturbed. She may admit to a weakness once in awhile, but it will be on her terms.

So it was only fitting that the news about the series’ planned demise by the end of the sixth season was broken on the unsuspecting world not by the producers, but by her, in an interview. In a way that befits the dowager countess, she had just voiced doubts about the continuation of the series, taking her character’s age into account. If she is too old to go on, the series, so it seems, can’t go on either. And whatever the countess has doubts about must cease to exist.

So, all good family affairs eventually come to an end. Including “Downton Abbey” and the Passover meal.

What Do Passover and ‘Downton Abbey’ Have in Common?