Kim Kardashian Blurred Out by Ultra-Orthodox 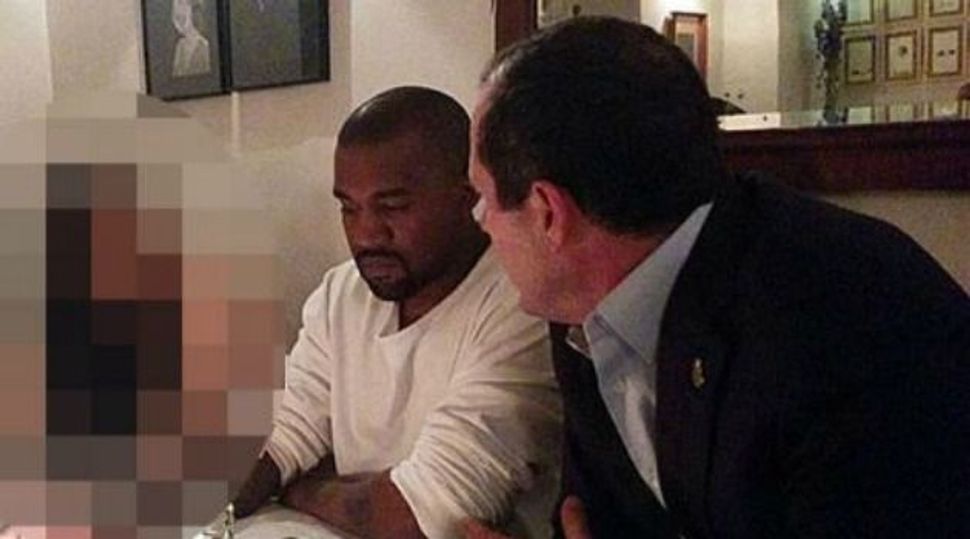 Just about every part of Kim Kardashian has probably been exposed to the world by now, between her infamous sex tape, reality television, and most recently, the photographs of her famed hourglass figure that “broke the Internet.”

For most of the media, the more of herself Kardashian shows off, the better. But one Israeli publication that reported on the Jerusalem visit by the reality show celebrity and her rapper husband Kanye West wasn’t interested in exposing her, but covering her up as much as possible.

The ultra-Orthodox website “Kikar HaShabbat” doctored a photograph of the famous couple in a Jerusalem restaurant to hide Kardashian not once, but twice in an article published on Tuesday. Once, her image was covered up by a restaurant bill superimposed onto the picture – in another – she was pixelated into fuzzy oblivion. Even her name was not published in the newspaper – she was referred to only as “singer Kanye West’s wife” – all in the name of extreme modesty.

Why, one might ask, would an ultra-Orthodox publication be reporting on the Kimye visit to Jerusalem at all? The couple, after all, aren’t exactly household names in the devoutly religious community the website serves, and the itinerary on their whirlwind overnight visit Jerusalem – baptizing their daughter in Jerusalem’s Armenian Cathedral and visiting the Church of the Holy Sepulchre – wasn’t of great interest to that community, either.

In fact, the article in which West appeared and Kardashian was disappeared was a scandal story, but it wasn’t a Hollywood style scandal and they weren’t the focus of the story. That role belonged to their host, Jerusalem mayor Nir Barkat, who offended members of the ultra-Orthodox community with his choice of venue to meet the famous duo.

The headline reads “Barkat hosts famous couple in a restaurant that serves “treif” (non-kosher food) The establishment in question is the gourmet restaurant “Mona,” from which Mayor Barkat posted a photograph of himself at a table there with the couple on Facebook in which he wrote “Raising a glass to Jerusalem with Kim Kardashian and Kanye West! I asked them to serve as Jerusalem’s ambassadors and spread the word that Jerusalem is an open city and welcomes everyone.”

The piece charged the mayor with “insensitivity to the majority of city-dwellers who keep kosher” by eating at a “non-kosher restaurant that violates the Sabbath.” What’s worse, another website, Ynet, got hold of the foursome’s dinner bill which included “chicken in butter au gratin” indicating a direct violation of kosher laws against mixing milk and meat.

The article featured multiple outraged reactions to the meal from unnamed ultra-Orthodox politicians in the city. A rabbi in the city, Rabbi Eliyahu Schlesinger attacked Barkat – who is not himself Orthodox – saying that “every mayor in Israel must know that he represents Orthodox people and especially the Jerusalem mayor needs to understand he represents everyone and be sensitive – it’s a shame he is so insensitive.”

The municipality defended Barkat in the article saying that “the mayor didn’t consume any non-kosher food, Barkat doesn’t eat “treif” – the meal was served to his non-Jewish guests.”

The visit to Israel by the couple and Kardashian’s equally-famous-sister Khloe turned out to be briefer than expected, with reports that they would visit Tel Aviv and the Dead Sea proving false. Hopes rose briefly on Monday that West would mount a surprise late-night concert in Jerusalem as he had on the couple’s last stop in Armenia, but in the end, decided against it.

As a reader service, the Shmooze has found this actual photo of Kim Kardashian from her recent trip to Armenia./Getty Images

Kim Kardashian Blurred Out by Ultra-Orthodox