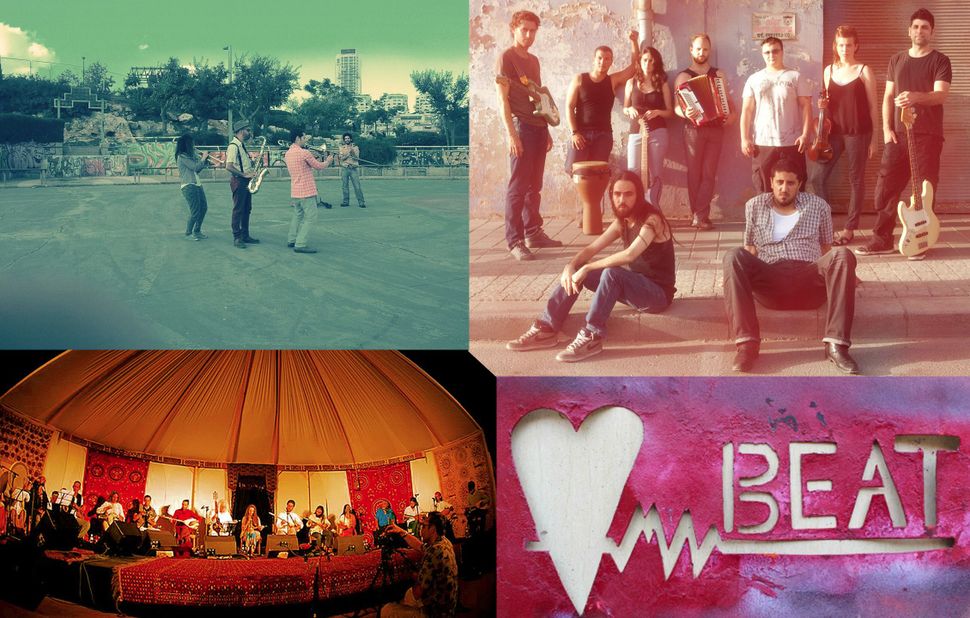 A few weeks ago, we introduced you to . However, in our listening escapades, we also found a number of bands from the region with multicultural members that are using music to help aid in communication, share peace-building techniques, and entertain and inspire across geographic and political lines. Members of these groups, many of which have both Israeli and Palestinian members, have chosen collaboration over destruction, art over war in order to address the complicated current events plaguing the Middle East right now.

Here are four bands from the Holy Land building peace through music. Check them out:

This multicultural group of musicians fluctuates in size from seven to 10 members who come from Jewish, Muslim, Christian, and Bedouin backgrounds. The band, based in north-central Yodefat, Israel, performs the ancient music of these diverse cultures and sings in Hebrew, Arabic, Aramaic, Turkish, and Persian in order to promote “peaceful dialogue through music,” as they say. Diwan Saz performed at South by Southwest this year and finished a tour throughout a North American in March. Currently, the group is crowd-funding a new album.

The primary goal for non-profit organization Heartbeat: Amplifying Youth Voices is to unite Israeli and Palestinian youth (aged 14-24 years old) through music. Founded by Maryland-native Aaron Shneyer in 2007 as part of a mtvU Fulbright, the program has reached more than 100 young musicians of both backgrounds through retreats, workshops, camps, field trips, and local and international performances. Heartbeat students learn music theory, improvisation techniques, and songwriting skills, combining them all to write original music. The Heartbeat touring ensemble takes these tunes on the road, representing a band of both Israelis and Palestinians who sing, perform, and discuss current events in peaceful co-existence. The band just returned from its fourth U.S. tour.

Pearl Jam’s Eddie Vedder also recently announced that all proceeds from his cover of John Lennon’s “Imagine” will be donated to Heartbeat. Download “Imagine” here.

Self-described as “Yemen Funk,” this Jerusalem-based musical collective is led by Yemenite-Jewish singer Shiran Karny. The band, anchored by a heavy section of trumpets, trombones, and saxophones, performs both original songs and reimagined traditional tunes in Yemenite, Hebrew, Arabic, and English. They bring up-tempo, danceable tunes to both festivals and local clubs across Israel in an effort to blend musical genres and cultural origins. And just last week, Bint el Funk played a TEDxJerusalem event.

This hip-hop group got its start in a bomb shelter in Jaffa in 2006. With rappers, singers, and instrumentalists who include Arabic Muslims, Jewish Israelis, Russians, and a female Palestinian (who has a burgeoning solo career of her own), the multilingual ensemble address issues of political relevance in Arabic, Hebrew, Yiddish, Russian, and English and often draws comparisons to the Wu-Tang Clan and Gogol Bordello.