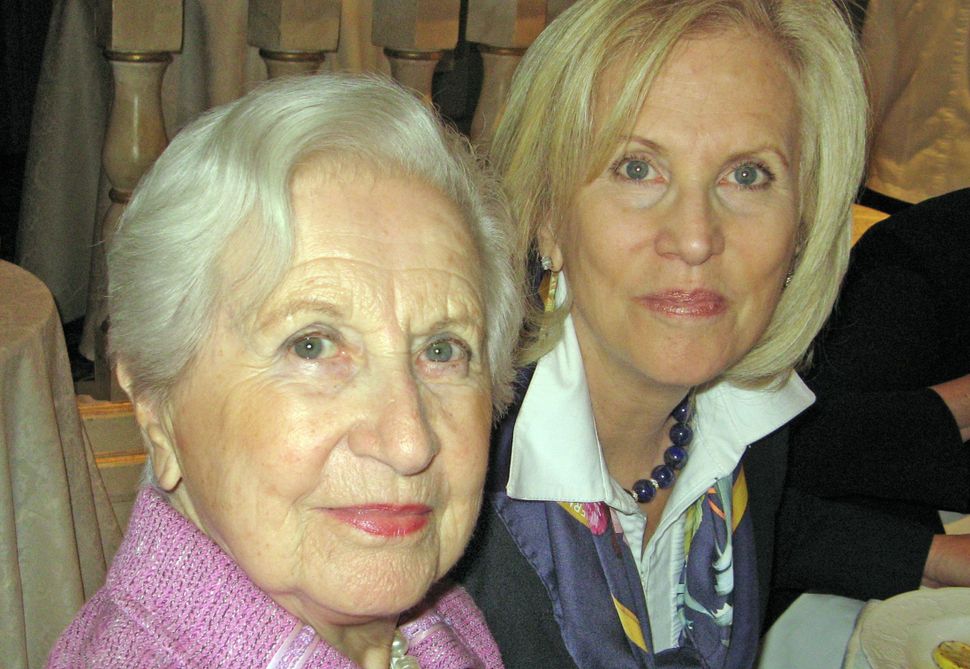 Ruth Wachner Pagirsky with her daughter Image by Karen Leon

“My mother is not only beautiful, but articulate and will take you on a journey with her” Regina Skyer — daughter of Holocaust survivor Ruth Wachner Pagirsky — told the guests at the April 23rd Museum of Jewish Heritage: A Living Memorial To the Holocaust’s 23rd Annual Spring Women’s Luncheon at The Pierre. “Sixty-nine years ago on June 19, 1946 my mother arrived in New York City. She was told not to speak, to forget all that happened to her. Everyone of you at this event is doing a mitzvah because you are here to listen, remember and teach it to the next generation.”

Following welcome remarks by museum director and CEO David Marwell, luncheon-co-chairs Patti Kenner, and Ann Oster Pagirsky — looking decades younger than her 90 years with her chic short white hair, pearls and pink jacket—launched her astonishing tale of survival. Born in Germany, exiled to Poland, she described past events in the present tense, recalling her father’s last words to her “He put his hand on my head, looked into my eyes and recited the ancient priestly blessing: ‘Du mayn Kind wirst lebn — you my child shall live to tell it all. I was ten years old when my father was arrested…shipped to Dachau.”

She described her town’s square in 1942 where men and women were separated, where she witnessed atrocities including a young boy wrenched from his mother’s arms his head smashed against a wall. She told of men being seated on benches and women forced to cut off their beards. When her grandmother refused, a German hit her and called her a “whore!”

Hers was a complicated survival chronology that included being hidden by a Polish peasant, assorted escapes with finally being smuggled into a camp where young Polish women volunteered for work in Germany apropos which Pagirsky said, “it was an escape from the monotony of village life,” but it was her mother who viewed this as a chance at survival. “My mother told me not to talk — ‘be mute’ —because my accent would have given me away as a Jew. “She pushed me out of the gate! At that moment I hated my mother!” She paused. “I wish I could have told her she gave me life twice, but I did not know it then. Talk about survivors’ guilt!

Landing on a farm outside of Heidelberg owned by I.G. Farben, Pagirsky never spoke for the years she was there. “A lot happened to me at the farm.” No details. But in her 2013 self-published autobiography “Memoirs,” which each guest received, she describes, among her travails, a horrific sexual assault while mute. The only survivor of a family of 302, Pagirsky told the guests—among whom was Poland’s new Consul General in New York Ursula Gacek — “I was liberated by the American Army.” She married Irving Pagirsky, a survivor of Vilno. They had three children, nine grandchildren and two great-grandchildren.