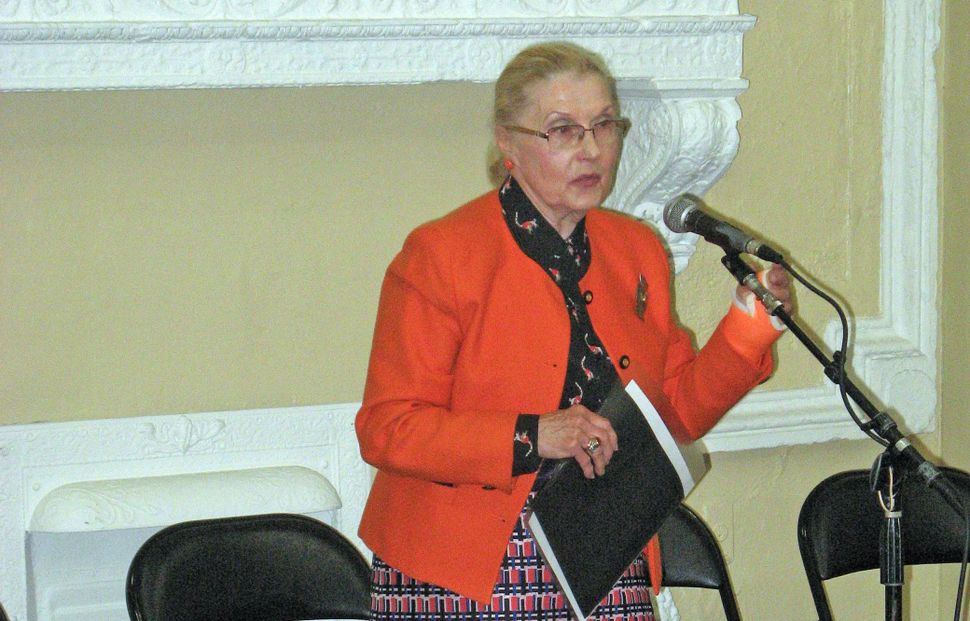 When in the fall of 1948—I was asked to sing a Yiddish song for a man sitting in the lobby of the Hotel Marseilles on Broadway and 103 rd Street recording songs by Holocaust survivors, I could not have imagined that decades later it would be part of the “Stonehill Jewish Song Collection” and that —I was told—of the 1000 or so [unidentified] singing survivors, might be the only one identified by name! That’s thanks to former associate editor of the Yiddish Forward Itzik Gottesman (now Senior Lecturer, Yiddish Language and Culture, Dept. of German Studies, U. of Texas, Austin) who, while listening to the raw tapes, recognized my voice.

Asked to participate, in the May 13 “Special Launch of the Stonehill Collection Website” held at the still extant Hotel Marseilles, I tearfully sang that recorded children’s song “Tuk, Tuk, Tuk” (knock, knock, knock) and read an excerpt from my past Forward article about the then setting of the Marseilles —a transient shelter for survivors of ghettos, extermination and DP camps. “The lobby looked like a European Railway waiting room seen in post WWII black/white films. Families sitting on suitcases, men in ill-fitting coats, Polish, Yiddish, German spoken. Older people looking shell shocked, young people —survivors of Auschwitz, Bergen Belsen, etc.

Working after school [George Washington HS] at the YIVO at its then 123 rd Street home, assisting on the first ever U.S. exhibit of what was then called “ Der Khurbn” (the destruction)—Holocaust and the Shoah had not yet been coined. I’d come to the Marseilles to meet guys. It was two years post liberation and they were vital, good-looking teenagers, young men and women in their 20’s on the move who laughed, joked, flirted and did not want to hear about the YIVO exhibit! That was the past! At one of their dances a young blond blue-eyed girl {did she survive because she looked Aryan I wondered) in high hairdo, platform shoes sang with the aplomb of a Dinah Shore. Her “manager” —a What Makes Sammy Run type—was looking for a financial backer.

“Those young people in the lobby of the Hotel Marseilles eventually became parents, grandparents, great-grandparents. Many achieved the American Dream and the long-suppressed and delayed nightmare propelled them “To Remember” putting them in the foreground of the building of memorials, museums and pressuring for an impact on Presidential and international policy for the Holocaust to be a model/ monitor for international behavior for mankind.”

I do not remember singing for Stonehill, nor why I chose this kindergarten song, “Tuk, Tuk, Tuk”” rather than a more sophisticated Yiddish song. Stonehill’s early death from cancer in 1964 made it impossible for him to complete a planned project to transcribe and publish the collection. It was donated to the Library of Congress’s American Folklife Center and has been digitized by the library and housed at the US Holocaust Memorial Museum, the YIVO Institute and Yad Vashem and can be accessed at www.ctmd.org/stonehill.htm.