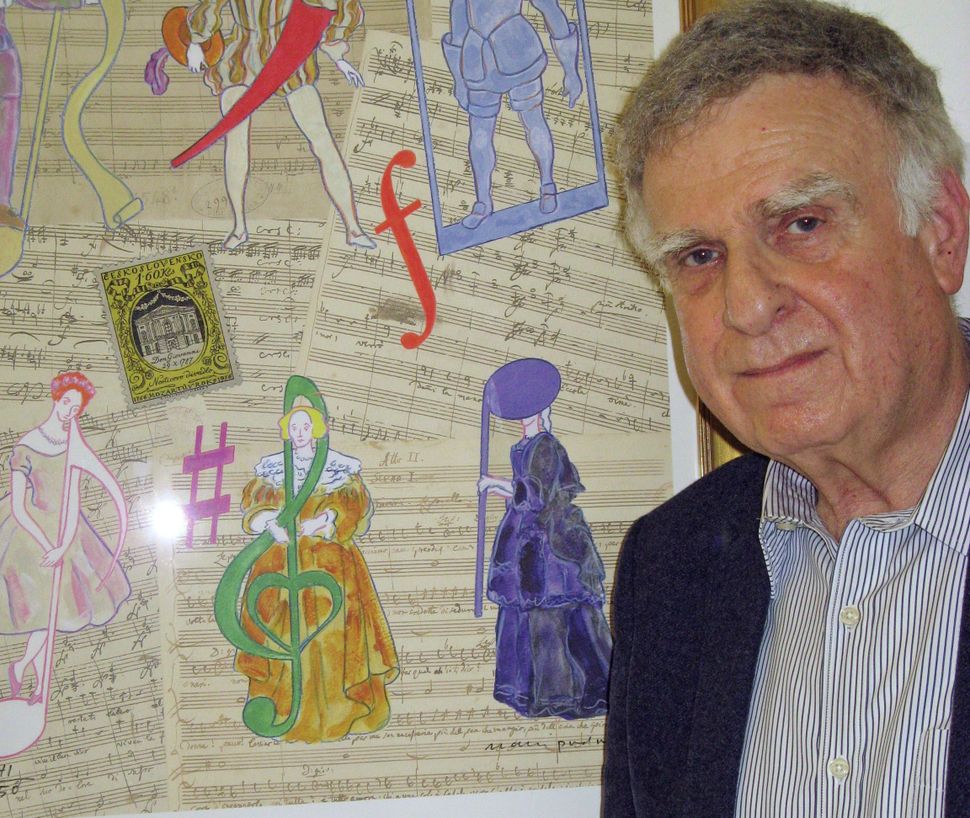 “When I first went to Camp Cejwin at 12, I knew nothing about Judaism. By the end of the summer, I was able to lead services in Hebrew and decided to go to Hebrew School before my Bar Mitzvah” renowned Judaica artist Mark Podwal, whose current project is a series of posters for each new Metropolitan Opera season, told me during our chat following the May 19 opening of his exhibition “The Artist as Critic: Mozart and Prague” at The Czech Center on East 73rd Street.

He’d been shuttling between New York and Prague where he has been designing the textiles for the 700-year-old Altneuschul. “As an artist I believe in legends,” Podwal told me “and there is the legend of how God chose Moses in whose book of Adam was written the name of every person who’d ever lived and what single task would be assigned to each. And when I spoke at the dedication of the Altneuschul, I said, my task was to design the textiles for the synagogue.”

How did he mesh his love of Prague and Mozart — whom he dubbed as “the dissident” — with this Jewish imperative? I asked Podwal as we circled the room to view his more than 20 music-inspired works. “I love Mozart and I love Prague,” said Podwal. NYU Professor of Music Michael Beckerman offered a recitative of Mozart’s travails in Vienna and Salzburg. How at age 5 or 6 he was imitating other composers, at 12 writing symphonies, concerts, operas to great success “yet could not quite fit in, didn’t have the right kind of charm to please the royal courts.”

Beckerman detailed the blossoming of Mozart’s creative genius in Prague where he felt welcome. Following the launch of his “Marriage of Figaro” — the very opera for which in Vienna he was criticized as having ‘too many notes — he wrote his father: “’You can’t imagine people on the streets are singing ‘Figaro’!’” In Prague he was also commissioned to compose “Don Giovanni.”

“You may be wondering what the Jewish connection is,” said Beckerman. “One of the key figures in Mozart’s Prague was Lorenzo Da Ponte who—famously Jewish-and- converted— came to the U.S. after being run out of many places.” Da Ponte [ne Emanuele Conegliano] wrote the libretti for Mozart’s most popular operas: “The Marriage of Figaro”(1786) “Don Giovanni” (1787) and “Cosi fan tutte”(1790). In New York, he was the first Roman Catholic priest to be appointed to the faculty of Columbia College and the first to have been a Jew who introduced opera to New York (1825) and the music of Gioachino Rossini.

Asked if he did “something other than Jewish” Podwal — who is also a dermatologist — recalled: “When the Met Museum [of Art] first bought my work, the director of 20th Century Art said ‘Mark you’ve got to get out of this Jewish rut’… I didn’t respond, but over the next twenty years the Met reproduced my work of 13 Jewish objects [and in their store] sold a Seder plate, a Chamshah [hand] and Hanukkah card. “He happily noted that the Met Opera “Keeps reproducing my “Don Giovanni” poster. Any future projects? “One will be of Dvorak wearing a Mozart shirt.”

Following the reception, the guests were treated to a screening of Milos Forman’s 1984 film “Amadeus” starring Tom Hulce as Mozart which was shot in Prague and contains the now iconic “too many notes” scene.