Is John Galliano Poised For a Comeback? 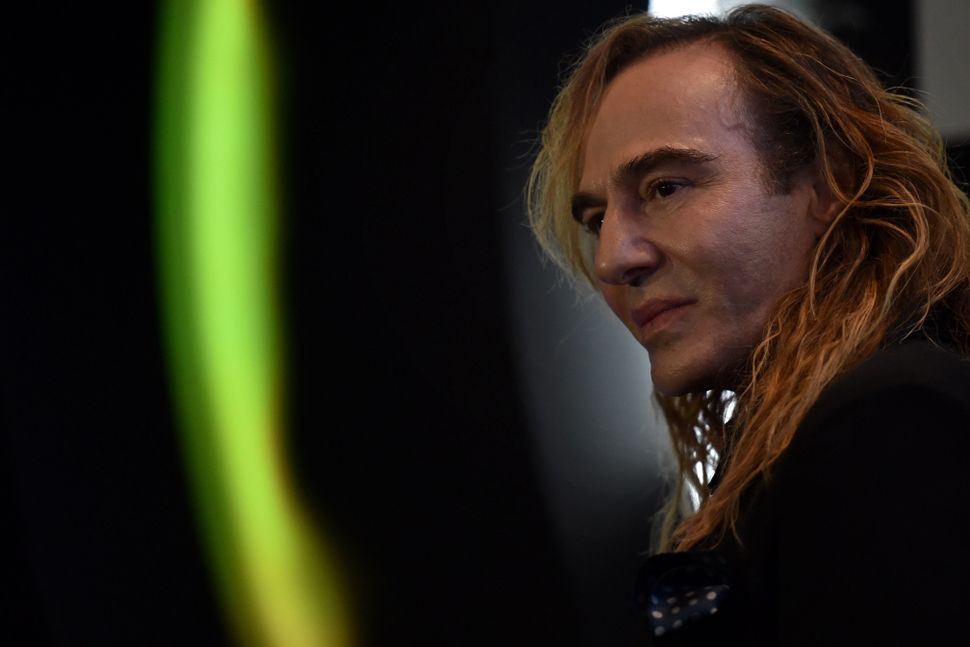 John Galliano, the star designer sacked by Dior for a drunken anti-Semitic rant, has been successfully rebuilding both himself and the Maison Margiela fashion brand since he took over its helm in October, said the man who gave him the job.

Diesel founder Renzo Rosso, chairman and main shareholder of Maison Margiela’s parent OTB group, said sales were already up 20 percent at the fashion house even though only a few of Galliano’s pieces had so far reached the shelves.

Galliano, widely hailed as one of the most talented designers of his generation, fell from grace in 2011 after a video went viral of him drunk in a Paris bar, saying “I love Hitler” and telling a couple their ancestors should have been gassed.

Galliano blamed addiction to drugs and alcohol for the rant, said the remarks did not represent his real views and went through a public period of rehabilitation sponsored by the Anti-Defamation League, a charity that fights anti-Semitism.

Speaking at an event hosted by three London synagogues over the weekend, the disgraced designer . “I am an alcoholic. I am an addict,” he said. “This is in no way an excuse. We alcoholics and we addicts are not responsible for our disease. However, I do take complete responsibility for my recovery and making amends.” He added: “I get a daily reprieve from this disease and that comes from total abstinence.”

He emerged with a job at Oscar de la Renta in New York in 2013 before Rosso tapped him last year to take over the house founded by Martin Margiela, a designer known for being as self-effacing as Galliano is flamboyant.

“John is a real pro, I am so happy to have him,” Rosso told Reuters at his company’s headquarters, an hour’s drive from Venice.

“He is a not a designer but a couturier and has great pyramidal thinking – turning couture concepts into ready-to-wear clothing and accessories,” added the tattooed 59-year-old Italian entrepreneur.

Galliano’s appointment raised eyebrows last year, not only because of his controversial past but also because of the contrast between his persona and that of Maison Margiela’s reclusive founder.

Martin Margiela did not stitch his name on his products, never took a bow after runway shows and refused to be interviewed or photographed. He disappeared from public life and gave up fashion after resigning in 2009. Sources have told Reuters he is now living incognito in Paris, spending most of his time painting.

It seemed an odd fit for the famously preening Galliano, but the fashion industry seems to have embraced both the British-born designer’s repentance and his new role at a house with a decidedly different profile than his own.

This week’s edition of Paris Match, the best-selling French weekly magazine, carries on its cover a photo of lawyer Amal Clooney, the media-darling wife of film star George, in a red dress designed by Galliano for Maison Margiela.

Rosso said he thought of hiring Galliano the minute he got sacked from Dior and from his own brand John Galliano, which is still controlled by Dior, part of the LVMH group.

Sales at Margiela now exceeded 100 million euros ($110 million), Rosso said. The brand has been profitable since 2013, after more than a decade under OTB (Only the Brave) ownership.

“Martin told me I could not give his brand a better present as Galliano was the designer he admired the most,” Rosso said.

Margiela met Galliano for hours in Paris, giving him guidance but telling him of the brand: “make it your own,” Rosso said.

Rosso, one of Italy’s richest men, made his fortune with the stone-washed brand Diesel he founded in 1978, which he grew with off-the wall ad campaigns. One featured a woman in a denim burqa, another had two male sailors kissing, and another showed a model on a giant cigarette with the slogan “how to smoke 145 a day.”

Two years ago, he hired Lady Gaga’s former stylist, Nicola Formichetti, to “reboot” the fashion label. Now he is preparing a new ad campaign with Formichetti, who has worked a lot on Diesel’s core products such as jeans and leather jackets, but he said it would not be as provocative as in the past.

“Today, I cannot be as crazy as I was before,” Rosso said. “The world has changed. You constantly have to be careful not to offend anyone.”

Diesel has sacrificed more than 85 million euros in revenue in the past year to clean up its distribution, particularly on the Internet, where too many discounted items were sold, Rosso said.

In 2014, OTB’s earnings before interest, tax, depreciation and amortization (EBITDA), fell to 117.4 million euros from 138.1 million in 2013, on net sales of 1.5 billion euros, down 1.2 percent, but up 0.5 percent when excluding foreign exchange impacts. Diesel represents more than 65 percent of sales.

While Rosso serves as chairman, OTB is run by joint CEOs Riccardo Stilli and Rosso’s son Stefano, who have said they are on the lookout for potential acquisitions of up to 500 million euros. Two years ago, it bought Italian fashion brand Marni, which should become profitable next year when sales exceed 150 million euros, Renzo Rosso said.

Rosso said he was contemplating an initial public offering (IPO) but not before five years, a move which could coincide with his decision to resign as chairman, he added.

“I think an IPO would give stability to the group and make employees feel safer,” he said.

In the jetset world of fashion, Rosso remains something of an iconoclast. He criticized other fashion brands for wining, dining and flying journalists around the world to attend shows, write reviews and post images on their Instagram and Twitter accounts.

“How independent can these journalists’ reviews be?” asked Rosso about journalists and bloggers who stay in luxury hotels and travel for free to attend fashion shows.

Last month, Chanel flew journalists to Seoul to see its cruise collection. Then it was Louis Vuitton in Palm Springs and later Dior in Cannes, just before the film festival.

This month, Kering’s Gucci is taking journalists to New York to view the first cruise collection of its new designer, Alessandro Michele.

“Thanks to these social media tools, brands get a lot of publicity… But I think such methods can put off the young generation, who realize what is going on,” Rosso said.

People at Chanel, Gucci and LVMH’s Dior and Louis Vuitton say the brands traditionally pay for trips because journalists cannot afford them. All the brands declined to comment.

Is John Galliano Poised For a Comeback?