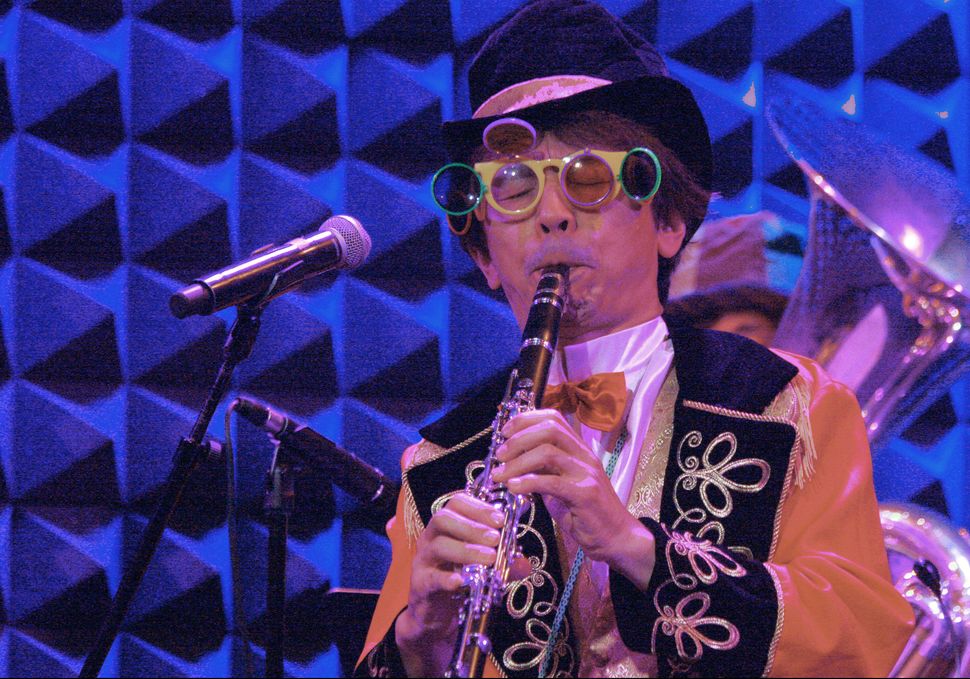 It would have taken the fanciful imagination of a writer like Haruki Murakami or Salman Rushdie to have invented a scrappy quartet of Japanese musicians who play a punk-rock infused brand of Ching Dong — a style of Japanese street music roughly analogous to New Orleans parade band music — until one day the leader finds and listens to an LP of the Klezmer Conservatory Band’s 1980 album, “Yiddishe Renaissance,” and decides this is the music he was always meant to play.

In this version of the story, the band gets so good at its unique fusion of all those influences that it gets invited to perform at Kulturfest — the sprawling international festival of Yiddish music and culture taking place this week at venues throughout Manhattan — alongside the greatest contemporary klezmer and Yiddish artists, and winds up being a highlight of the festival, a spark of yidishkayt that somehow landed in Tokyo instead of the Lower East Side and was taken up by this band of merry Tokyo-based musicmakers.

Jinta-la-Mvta did exactly this in its concert at Joe’s Pub on Monday night, proving itself not only unique with its Japanese-accented Yiddish, entertaining with its audacious punk-infused presentation, colorful costumes and infectious enthusiasm, and skilled at a level only surpassed by the very top tier of klezmer musicians.

Jinta-la-Mvta learned the music it plays in very much the same manner as the klezmer revival bands of the late 1970s and early 1980s. After listening to that album by the KCB, they went back and studied the original immigrant-era recordings of the likes of Naftule Brandwein and Dave Tarras, learned from those clarinetists the repertoire, modes, and ornamentation, and played it in such a way that it came out as an organic fusion of Yiddish music accented by the particular language and place of its time.

Hence, the fusion of Ching Dong and klezmer that seemed utterly natural, even when the vocalist sang a Japanese accented rendition of the Yiddish standard, “Papirosn,” or when the band — featuring clarinet, accordion, tuba, and percussion — played its version of Brandwein’s “Heyser Bulgar” with the same brassy enthusiasm that the pioneering Bay Area revivalists the Klezmorim brought to the tune, and then turned around on a dime and rendered a stately and dignified “Bessarabian Hora” in the style of Tarras.

And then, like many of today’s best klezmer bands, the group tackled some unlikely source material, in this case, Frank Zappa’s jazzy funk tune, “Peaches and Regalia,” and gave it their own klezmerized imprint.

There was also something unique about hearing this music played without a drop of sentimentality or nostalgia that enlivened it and gave it even more vibrancy and joy, enabling one to imagine how Yiddish music may have naturally evolved without the interruption brought about by the attempt to annihilate the people to whom it belonged.

Jinta-la-Mvta was preceded at Joe’s Pub by vocalist Vira Lozinsky, who with superb piano accompaniment by Alla Danzig, took the crowd on a journey through the Great Yiddish songbook, avoiding the tried and true and emphasizing the more complex and artier side of Yiddish theater and folk song.

Again, it made a listener imagine that instead of being something extraordinary — to hear Yiddish music being sung at Joe’s Pub as comfortably and naturally as if it were Karen Akers or Andrea Marcovicci onstage — this would have been just another night out on the town in Yiddishland.

Seth Rogovoy is a frequent contributor to the cultural pages of the Forward and the author of “The Essential Klezmer.”