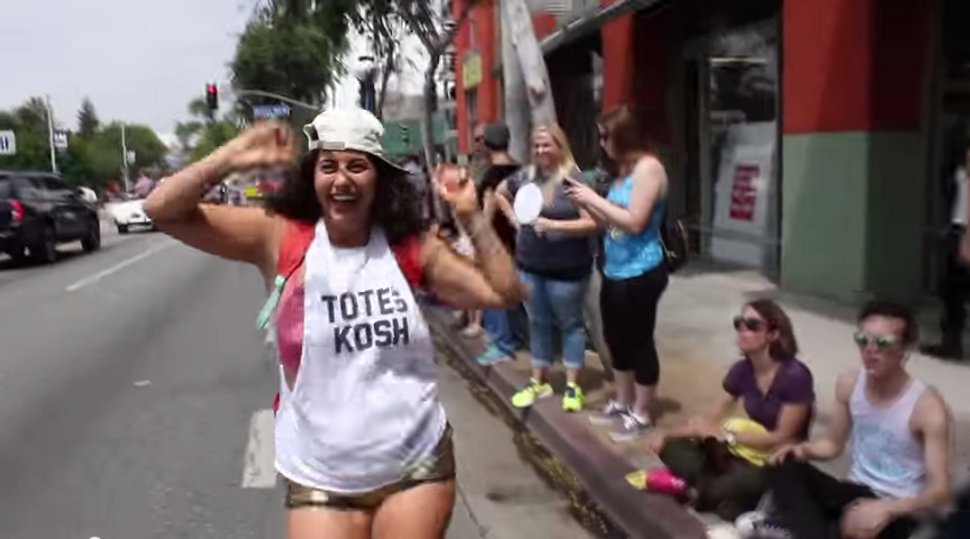 (JTA) — The indefatigable web comic Jessie Kahnweiler, of “Dude, Where’s My Chutzpah?” and “Meet My Rapist” fame, is back with a new video, this one highlighting white privilege — the idea that whites can get away with doing something that would be way more likely to get a person of color arrested.

In the video, called “Jessie Gets Arrested,” Kahnweiler interviews people on the street about whether or not white privilege exists, while simultaneously doing her best to get arrested. In displays of daring, Kahnweiler manhandles some of L.A.’s biggest power brokers — like Mayor Eric Garcetti and Police Chief Charlie Beck. She also trespasses, and tries to sell drugs to uniformed officers.

But rather than getting Kahnweiler arrested, all her hijinks manage to get her is a couple of laughs.

“I just wanted to explore and expose my own white privilege,” Kahnweiler told JTA. “As white Jewy liberal I understand that I will never, ever, ever understand what it’s like to be black in America. But there’s a conversation about white privilege that no one wants to talk about, and the video is an attempt to challenge my own privilege.”

The video started as a joke, a kind of dare to herself. “But it became painfully real as soon as we started shooting,” Kahnweiler said. Painfully real — and yet still hilarious. The video is another example of Kahnweiler’s trademark move — gut-wrenching social commentary packaged in bawdy physical comedy. Kahnweiler uses her sexuality and her very body to make the point that all bodies are not treated equally before the law.