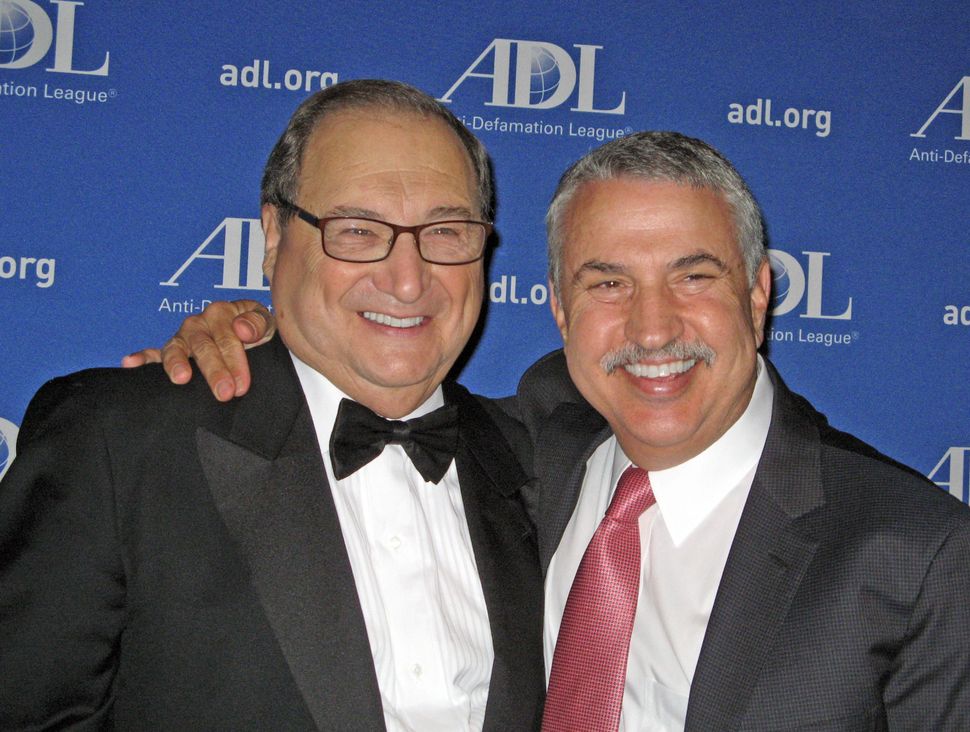 If you were among the 1,200 guests in reach of Abe Foxman at the June 17th tribute gala for the departing director of the Anti-Defamation League at the Waldorf-Astoria, you got a Foxman hug your ribs will remember.

The event was emceed by Katie Couric, with video greetings by President Obama and former president George W. Bush, plus the 20 dais toasters: Elie Wiesel, Cardinal Timothy Dolan, who said he looked up to Abe “as a mentor, friend…who had better access to the Pope than I did” and Police Commissioner William Bratton who lauded Foxman as “a welcome partner to me and my law enforcement colleagues throughout the country.”

“You gotta love Abe,” said Ambassador Susan Rice the president’s National Security Advisor. Touting the ADL as “the conscience of America for over 100 years,” Rice offered Foxman a mazel tov: “Abe never sugarcoated his counsel. He is tenacious when fighting for what he believed is right. I was privileged to work with Abe during my time in the White House… He was once good enough to call me a gladiator in defense of Israel… Tonight, on behalf of President Obama, I assure you that the United States will never be complacent when it comes to seeking a world that is more free, more just, more equal.”

“Abe Foxman influenced me from afar long before I knew him,” said Samantha Power U.S. Ambassador to the United Nations. “He is perhaps the straightest, most determined bundle of conviction I have ever met. When my 3-year old son Declan managed to program my Blackberry [audience laughter] no matter whatever key I bumped, it dialed Abe Foxman’s cell phone!”

France’s ambassador to the U.N. Francois Delattre dubbed Foxman “a national treasure” and former NBA Commissioner David Stern lauded him as “Anti-Discrimination’s first world responder.” Diane von Furstenberg said that 18 months before she was born, her 22-year-old mother had survived Auschwitz weighing 49 lbs. “I barely knew I was Jewish. I married a German prince.” After being honored at an ADL luncheon, she vowed, “ADL became the initials of my conscience.”

N.Y. Times Op-Ed columnist Tom Friedman mused: “Tom Friedman and Abe Foxman? How did they ever become friends?… The secret is that Tom Friedman knows Abe Foxman as long as does Mrs. [Golda] Foxman. It was 1962, at a wonderful Jewish camp Herzl in Webster, Wisconsin for Midwestern Jewish kids from Minneapolis — ‘The Frozen Chosen.’ On a Friday night in the dining room a 22-year old counselor dressed in his Shabbat whites [Abe]—next to him a 9-year old camper [me] and at the next table a cute little blonde Golde — the waterfront director… No one could have predicted the lives of young Abe and little Tom would intersect years later — young Tom with a column in the N.Y. Times who occasionally gave older Abe tsores — according to David Stern Latin for loving advice not wanted nor appreciated…I hold the record for Abe Foxman letters to the New York Times! Abe was never afraid to defend someone that others thought not worth defending.”

“If I was smart, I‘d say thank you and sit down,” said Foxman. “I can’t help but think of my parents and what they went through to survive [the camps], their struggle to regain their child which they had given to his Catholic nanny. They instilled in me a love of Yiddishkeit, Israel, love for the Jewish people… If only my Polish nanny Bronislawa could know what her risks, courage made possible — how many lives have been impacted by one woman.” His voice broke.

On a personal note: As young boys, my father (Matvey/Mordechai Bernstein] and Abe’s father Joseph shared a kheder benkl (school bench) at the Baranovitch Yeshiva (in what is now Belarus). Abe’s father survived Hitler’s cauldron. My father survived Stalin’s “paradise.” Post-war they resumed their childhood friendship and in 1966 Joseph Foxman said Kaddish at my father’s grave at the Workmen’s Circle cemetery.