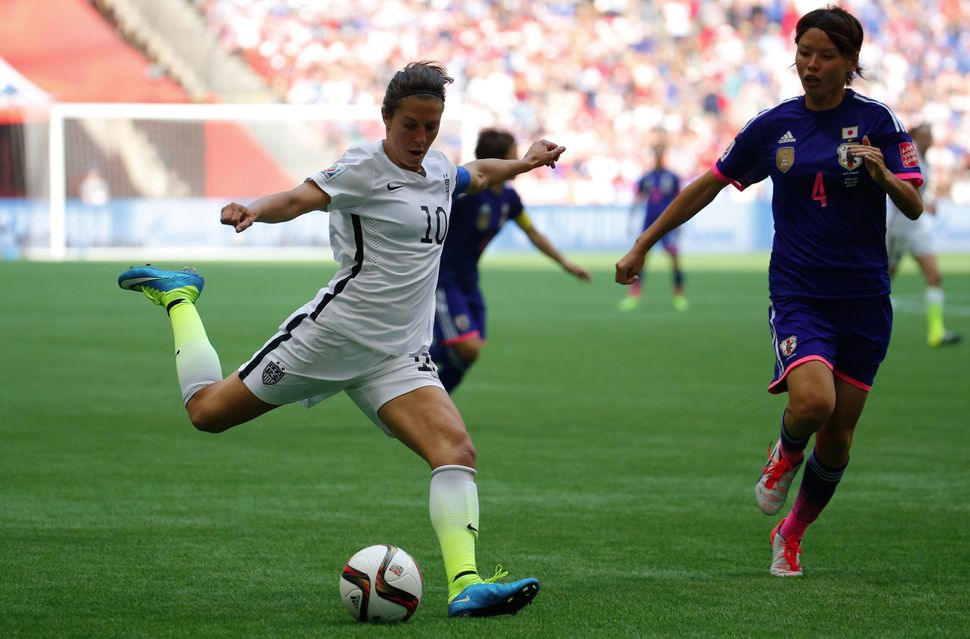 As I write this, countless explainer posts are going up online, offering answers to one timely question: Who is Carli Lloyd?

Here are a you may already know:

1) She is the star player of the U.S. World Cup soccer team — she won the Golden Ball as best player of the tournament after her team’s win last night.

2) She scored a hat trick in the FIFA Women’s World Cup final against Japan — and remains only the second person, and first woman, to do so.

3) She scored a goal in every U.S. game in the knockout stage of the Women’s World Cup.

4) In addition to her Golden Ball, Silver Boot and World Cup gold medal, she also has two Olympic gold medals.

Something you may not know? The 32-year-old soccer sensation owes much of her incredible success to one special person: Rudi Klobach, her high school coach — and a Holocaust survivor.

Klobach was born in 1944 in Theresienstadt, his wife Barbara told The New York Times. His father, Karl, was made to bury bodies of fellow Jewish prisoners. After the war, the family moved to Dusseldorf, and then to the U.S. when Rudi was 4.

Over his 20 years as a New Jersey girls’ soccer coach, Klobach was responsible for 256 wins. In 2011, he was named to the South Jersey Soccer Hall of Fame.

But, as the Times story makes clear, no one meant as much to him as midfielder Carli Lloyd from Delran High School, whom he coached from 1997 to 2000. Klobach watched her rise to high school star status, and go on to win two Olympic gold medals. After every win, the Times reports, he would exclaim: “That’s my girl!”

Sadly, he wasn’t there to see her ascend to sports legend during last night’s game. Klobach died in January after a three-year battle with Lou Gehrig’s disease.

“He was never surprised at her success because she had always been so driven,” Barbara Klobach said. “He liked coaching her because she was so serious about the game.Some girls were just there for social hour, but no, not Carli.”

RIP Rudi Klobach. Your girl made you proud.