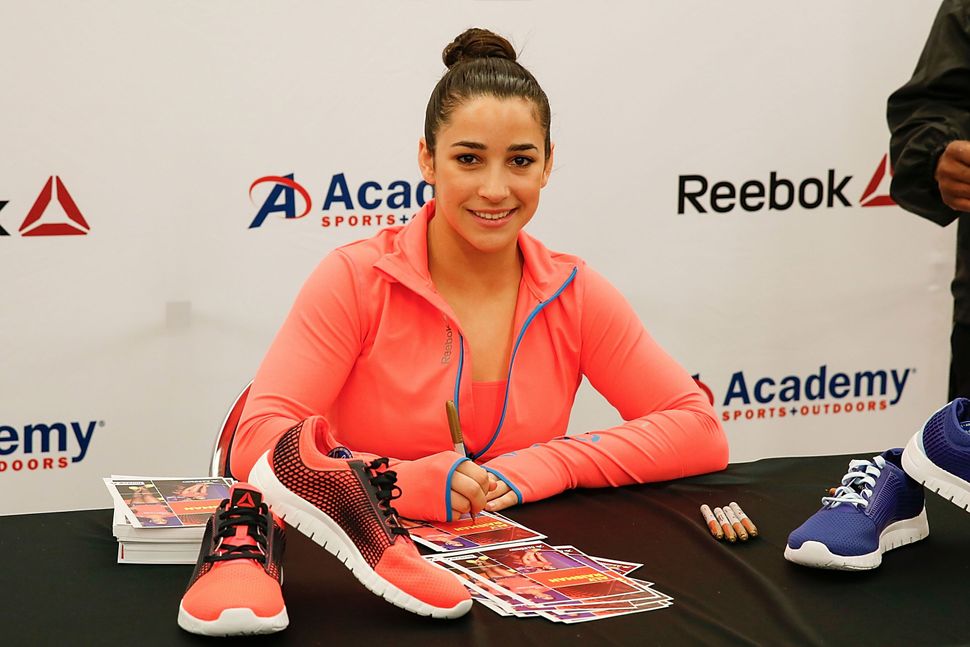 (JTA) — It sounds like a Jewish mother’s nightmare: A 21-year-old Jewish gymnast agrees to be photographed and filmed fully naked.

But Playboy, it’s not.

Aly Raisman, a two-time Olympic gold medalist, stripped down for ESPN The Magazine’s annual Body Issue, which features photos of top athletes without clothes, but also without revealing everything.

And Raisman manages to leave plenty to the imagination as she moves around and strikes poses on the balance beam and the rings. She says her muscular physique is on the bulky end of the spectrum for gymnasts. But you won’t hear her complaining.

“I think imperfection is beauty,” she says. “Instead of being insecure about my muscles, I’ve learned to love them. I don’t even think of it as a flaw anymore because it’s made me into the athlete that I am.”

Raisman, a native of Needham, Mass., was the captain of the gold-medal winning U.S. women’s gymnastics team at the 2012 Summer Olympics in London. Just 18 years old at the time, she individually won gold on the floor and bronze on the balance beam. She was also part of the gold medal-winning U.S.A. Gymnastics team.

But in the magazine interview that accompanies the ESPN video, Raisman says she dwells on her failures more than her victories: “At the last Olympics I got two golds and a bronze, but I think more about the fact that I didn’t medal in the All-Around than the fact that I did really well.”

She won her individual gold with a floor routine to the tune of Israeli folk song “Hava Nagila” — delighting Jews around the world. Before the performance, she told JTA, she was proud to be using the song “because there aren’t too many Jewish elites out there.”

She noted that the song had the added advantage of encouraging audience participation, saying, “I like how the crowd can clap to it.”

After the performance, Raisman’s rabbi, Keith Stern of Temple Beth Avodah in Newton Centre, Mass., gushed to the New York Post about her victory and her guts for saying she would have supported a moment of silence for the 40th anniversary of the Munich massacre of Israeli Olympians and trainers.

“She’s very proud and upfront about being Jewish,” Stern said at the time. “Neither she nor her family explicitly sought to send a message. But it shows how very integrated her Jewish heritage is in everything that she does.”

Raisman’s parents also got some press when a video went viral of them agonizing over their daughter’s second “Hava Nagila” performance to qualify for the individual all-around finals.

In the ESPN video, Raisman says she is a perfectionist when it comes to her intense training regime. One mistake in beam practice qualifies as a “horrible day,” she says in the video. She reports working out up to seven hours a day and maintaining strict habits.

“I’m always eating healthy, always going to bed early,” she says in the interview. “Everything I put into my body is for the purpose of gymnastics.

Still, when it comes to her appearance she refuses to obsess, explaining that she’s never had an eating disorder.

“I think gymnastics in the past had a bad reputation for that, but it’s not an issue anymore,” she says. “I’ve never seen an issue among the girls on the national team.”

If Raisman qualifies for the 2016 Olympic Games in Rio de Janeiro, at 22 she will be the oldest member of the team.