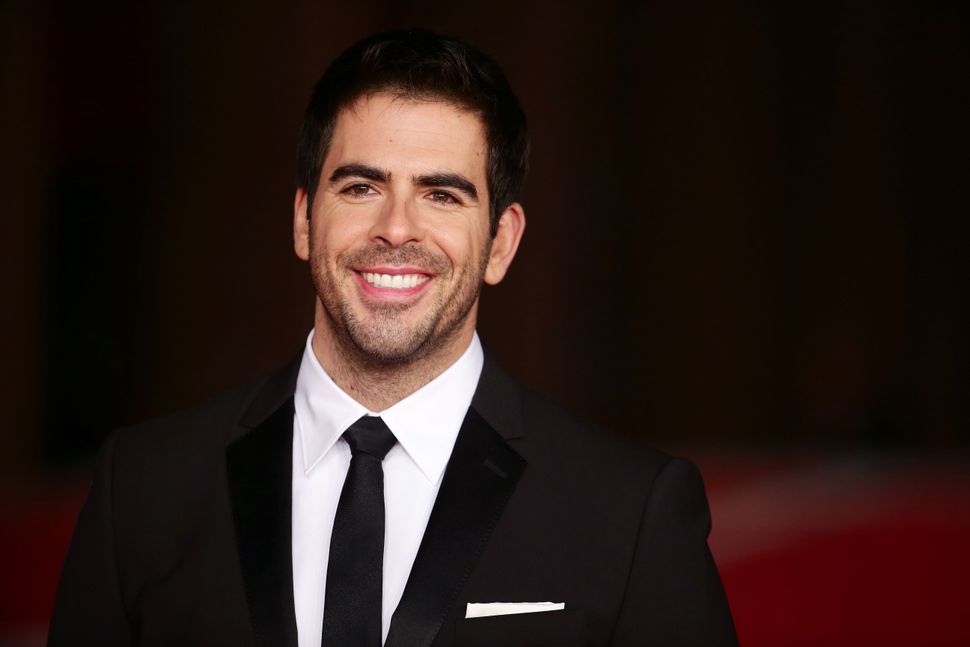 Eli Roth has made his career on fear.

The director who brought you “Hostel,” “Cabin Fever,” and “Inglurious Basterds”’ bat-wielding Bear Jew is now preying on your abhorrence for : the shark.

The Jewish host of “Shark Week,” the Discovery Channel’s annual attempt to scare you away from future beach vacations, dished to Vanity Fair about the cold blooded killers, which he feels are deeply misunderstood (they’re not).

I’ve always been shark obsessed, even as a kid. While others in Massachusetts would fear the summertime beach trips, I ran there hoping to catch a glimpse of a great white attack. (It never happened; mainly we saw overweight Massholes smoking cigarettes way too close to children.) The first novel I read was Jaws, and I even had a copy of Carl Gottlieb’s The Jaws Log, where he detailed the making of the film. I went on whale watches, I’ve been surfing, I even went scuba diving in Thailand for my honeymoon, but I had never seen a shark outside of the aquarium. Until Discovery asked me if I wanted to dive with sharks for Shark Week.

Now, as fellow MOT Steven Spielberg has taught us, sharks are scary. They have sharp teeth. They bite. They eat Jew-y Richard Dreyfuss types for breakfast. But still, Roth was undeterred.

Everyone kept asking me if I was scared or told me I was insane, but honestly, I felt like a kid going to Disney World for the first time. I had cameras filming me as I suited up like a Game of Thrones character about to storm Winterfell (or King’s Landing, depending whose side you’re on). As we got out in the water, my heart started racing as I saw a few sharks swimming around near the surface. The water in the Bahamas was so clear it was like looking into a glass tank, with the sharks all swimming 30 feet below. I stood up in what felt like 100 pounds of scuba gear, waddled over to the edge of the boat, and jumped in.

I have seen a lot of terrible CGI sharks in movies, but now just ten feet away, they actually looked like CGI characters. They were beautiful, graceful, elegant creatures, much different from the ones I take meetings with at Soho house. At first the sharks kept a safe distance from me – circling, watching from afar, reading the vibrations of my heartbeat. In my mind I was of course trying to use the shark telepathy I’m convinced I’ve have since birth to let them know that I was a friend and they should come over. Slowly, they circled and passed, and eventually swam right at me.

The first “Shark Week” aired in July of 1988 — cult status was instantaneous. This year’s run premiered on the Discovery Channel last Sunday and will continue until Sunday, July 12. The show has attracted even more media attention than usual due to a series of shark attacks in North Carolina over the last couple of weeks. Over the weekend, a marine became the 8th person to be injured, with bites to his forearm and right hand.

Roth, whose experience hosting “Shark After Dark” has turned him into an activist for sharks(a sharktivist?) will be bonding with more of them for his next project. “Meg,” he writes will be “about a giant megalodon shark that escapes from the bottom of the ocean and wreaks havoc on the ecosystem.”