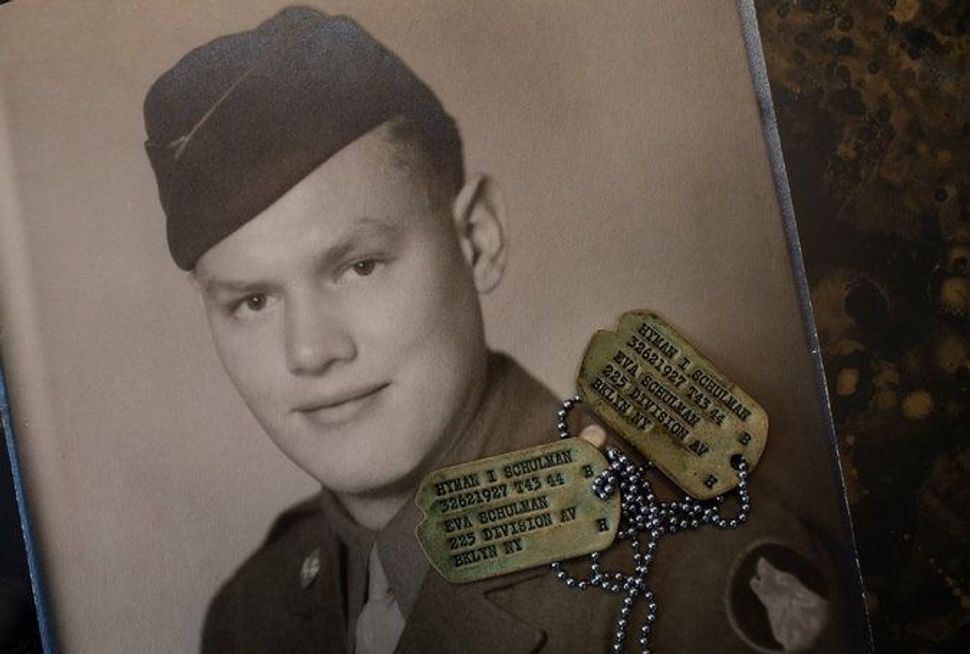 Image by The New York Times

“Yesterday we visited something that you might have already read about in the newspaper or heard about over the radio… Not very far from there is a concentration camp.”

These words, written by Private Hyman Schulman, to his wife, Sandy, in Brooklyn, while he was in Europe during World War II, are part of TK letter collection that has recently come to light, The .

Schulman, who was stationed in Europe as of 1942, worked as the aid to Rabbi Herschel Schacter, the first Jewish chaplain to enter Buchenwald, a Nazi concentration camp in Germany, in 1945.

On March 8, 1945 he wrote home about his recent promotion as the aid, saying, “Since I’ve been in the army I’ve always been hoping for a ‘break’ and I believe I finally got one… You won’t have to worry about your husband being hit by shells, living in muddy foxholes and generally roughing it in the E.T.O. for we are quite a ways back of the front lines.”

After the war, Sandy kept his letters, and stored them in boxes as they moved. They were recently rediscovered, the paper barely touched since she had received them nearly 70 years ago. The story was first reported by NJ.com

About Buchenwald, Hyman wrote, “The stench from the many dead bodies was nothing to the sight they presented. Old people middle aged and even younger folk were all shot up, bodies lying around.”

He also reported crematoriums (described to Sandy “in case people at home don’t believe it), piles of human bones over 7-feet-tall, and lampshades made from human skin.

He was surprised and moved when he watched starving Jews from Buchenwald refuse to eat a bite of matzoh on Passover until Rabbi Schacter finished the prayers.

Schulman also looked after Jewish children on a train to Switzerland, keeping siblings together during their resettlement.

After coming home, he opened a jewelry and watch supply business and performed as a singer.

Schulman died in 2013 at the age of 91. He and Sandy had been married for 69 years and had had five children.