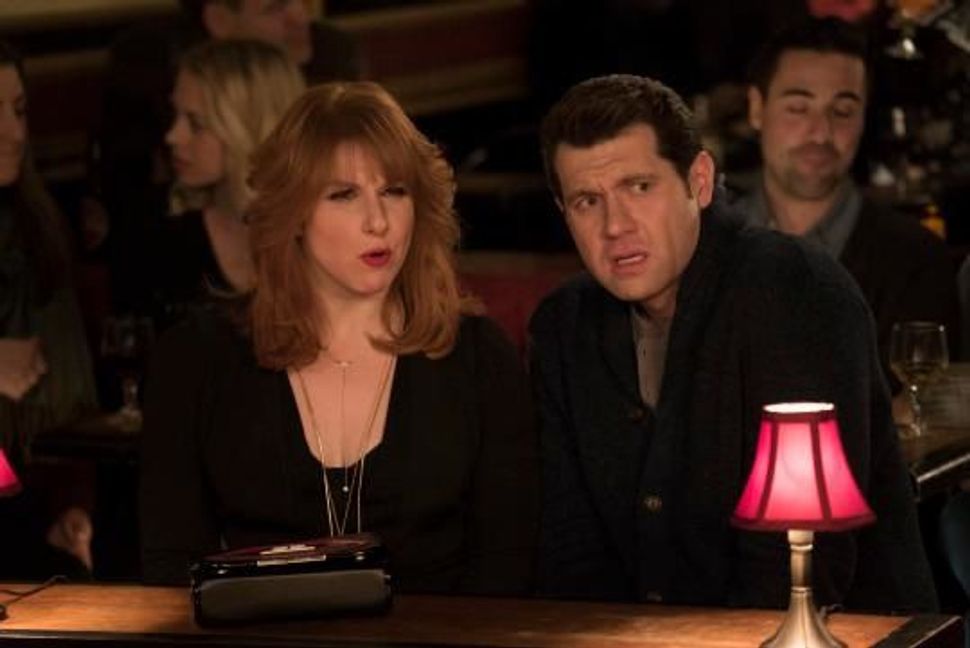 Julie Klausner greets me with a enthusiastic “Shabbat Shalom!” when she answers the phone. The 37-year-old comedian and creator of the new Hulu comedy series ‘Difficult People,’ is mid-way through a whirlwind press tour when we connect, and her sense of humor is firmly intact. When I begin by asking for her thoughts on being deemed a “person of the world” by ‘Difficult People’ producer Amy Poehler at the recent Vulture Fest, she cackles. “I think that’s just her calling me a slut.”

But Poehler may be onto something. The series — which stars Klausner and comedian Billy Eichner as snarky pals struggling to make it in show business — has Variety the duo “surprisingly good company” and Deadline dubbing it an “easy win” for Hulu. Klausner, on her end, is cautiously optimistic. She’s grateful, she’s excited and, with a tone that sounds colored by both eagerness and nerves, she says she hopes she does good by it.

The Forward caught up with Klausner to discuss developing ‘Difficult People,’ the intricacies of Jewish humor, and why she’s not all that excited about meeting people through Tinder right now.

Thea Glassman: When you first started the process of creating ‘Difficult People,’ what sort of story did you want to tell?

Julie Klausner: When we set out to develop this into a series, Amy and I talked about how the New York City on ‘Difficult People’ had to be different from the New York City in ‘Girls,’ in ‘Broad City,’ in ‘Louie.’ It had to be the New York City of two people who have been trying really hard for a break but they get in their own way constantly, because they are self-defeating and because life is just unfair. It’s a very specific story about people in their mid-thirties who are dealing with a semblance of arrested development. It’s, like, a little late to be grappling with things that people in my age and older still grapple with—and on top of that, to have to come up with people in the comedy world who have since moved onto fame and success in film and television, or who have moved on to start families. And [they’re] sort of feeling like they never really belonged in the first place and now they’re watching as life marches past, and they feel left behind.

Was that ever you at any point? Can you still relate to any of those feelings?

I don’t think that I will ever be in a place where I don’t feel like an outsider, where I ever don’t feel like I’m not still trying to figure things out, still sort of looking for my tribe. I’ve never really had the like, “oh! what a relief” feeling that a lot of people who live more joyfully, I suppose, do. They have the taking a breath, taking a break or enjoying fresh air or other sh—t that people find therapeutic but never really worked out for me.

I keep reading everywhere that ‘Curb Your Enthusiasm’ was the inspiration for the show. What do you think it is about that very specific sense of humor and sensibility that strikes a chord with people?

I love Larry David, I love ‘Curb Your Enthusiasm.’ You know what, it’s not about his Jewisness. It’s about why Jews are funny. I think that ‘Curb Your Enthusiasm’ works so fiercely because you’re dealing with someone who is so self-aware, who knows how social mores exist, and his job is to ask why. And some of them are grounded in moral premises and some of them are grounded in his own selfishness, his own convenience — which is a very hot comedy arc. Someone who is arrogant and ignorant is hilarious. And up until very recently only men got to play that.

Speaking of Larry David — you dubbed [Curb Your Enthusiasm co-star] Susie Essman a good example of “what Jewish women are like.” How do you define your own Jewishness?

I feel like we’re already talking about my Jewishness. I feel like my Jewishness is so much about my breathing, my thinking. I feel like this show is so integrated with the Jewish experience, the New York experience. I think the notion of difficult people in the first place…like who else is going to ask the restaurant to turn up the air conditioning but the Jewish girl who you’re on a f—cking first date with? I just grew up with certain things taken for granted. People will ask where did you learn to be a feminist and where did you learn to not be ashamed of the things you think and say? Or, you’re so emotional, how do you get in touch with those emotions? And it’s like, what the f—ck are you talking about? I don’t have any other reference. It’s like asking a Chinese person how did you learn Chinese. It was how I was raised, it was how I was born.

In 2008, the New York Times Modern Love section published your essay “Was I on a Date or Baby-Sitting?” about texting perpetuating casualness and confusion. So, seven years later, so much more technology. Has that hurt or helped dating?

I’ve been fumbling through being single in my mid-thirties. It’s all very confusing and overwhelming and it’s also coincided with a period of my life where I don’t particularly like leaving the house. So my laziness gets in the way of my desire to connect romantically with another human. Because I’m on my phone so much I love Tinder but then actually getting together to meet up is very, very daunting in a way that I don’t think it would have been in my twenties when I was out and about all the time. I definitely don’t feel like I am an expert in that department at the present moment.