A Chat With Lisa Belkin, the Jewish Writer Behind HBO’s Show Me a Hero’ 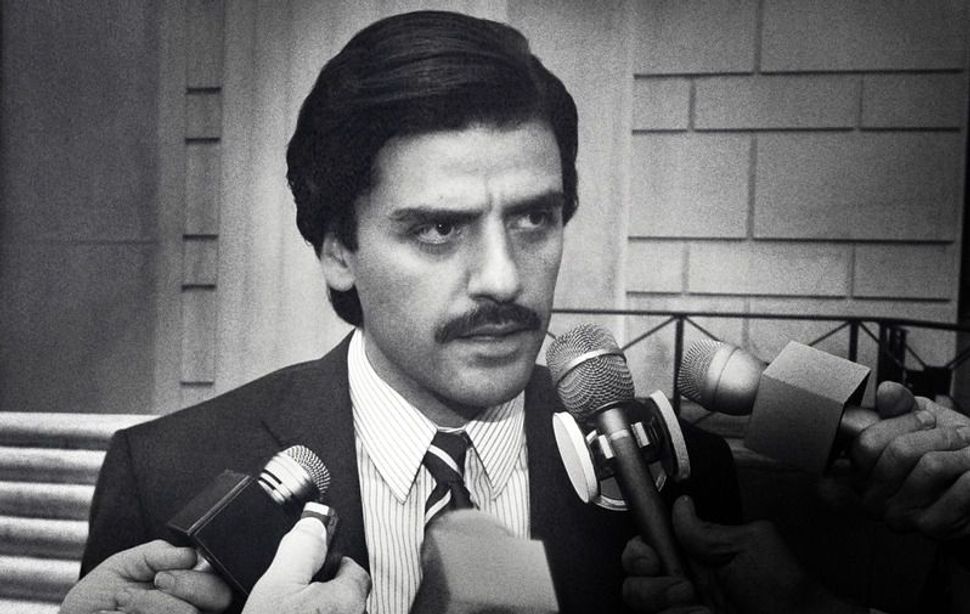 — the six-part HBO miniseries created by journalist-turned-showrunner par excellence David Simon (“The Wire,” “Treme”) with William Zorzi (who worked with Simon at the Baltimore Sun and on “The Wire”) and Paul Haggis (“Crash”) — combines riveting storytelling with impeccable timing.

On Sunday, Aug. 30, HBO will debut the final two episodes of this miniseries, based on the searing nonfiction narrative of journalist Lisa Belkin’s 1999 book, “Show Me a Hero: A Tale of Murder, Suicide, Race and Redemption.” It’s being rereleased Sept. 1, with a new foreword by David Simon and epilogue by the author.

“Show Me a Hero” unfolds around the 1985 ruling of U.S. District Judge Leonard Sand (a pitch-perfect Bob Balaban), in a case brought to federal court by the U.S. Justice Department and the NAACP. In his 600-page ruling, Sand finds that Yonkers has intentionally segregated itself over the decades, and orders the city to create first 200 units of low-income housing, then 800 units of affordable housing, in the mainly white, middle-class part of the city.

What could be a yawning tale of wonkiness is anything but. It’s the story of young Yonkers Mayor Nick Wasicsko (Oscar Isaac), the (white) denizens and politicians who fight the NAACP-sided ruling tooth and nail, and the Yonkers residents (primarily women of color) who live in the projects. These women are the would-be residents of the mandated new housing, designed by the innovative architect and urban planner Oscar Newman, proponent of “defensible space” and enemy of high-rise housing projects.

Perhaps best known today for writing about work-family balance, Belkin’s narrative breathes grainy life into the Yonkers of the 1980s and 1990s. We read (or watch), riveted, knowing that so many of the tropes are utterly unsustainable: The hair! The thinly veiled racism! The cigars in offices! Mayor Wasicsko’s Maalox habit!

“Show Me a Hero” isn’t polemic; it leaves its audience to draw its own conclusions. And yet, viewers can’t help but to compare our own times and actions to those depicted here. This week, we chatted with Belkin by phone about politics, race, anti-Semitism and what’s changed in the years since she wrote the book.

Michael Sussman, the NAACP lawyer fighting for the desegregation of public housing, is Jewish. The U.S. District judge, Leonard Sand, is Jewish. You and David Simon are Jewish. To what extent do you feel that Jews are drawn to civil rights issues as part of a broader pull toward social justice in America?

Belkin: Clearly they are. Civil rights, tikkun olam, is a thread that goes through everything that I learned about my religion. That’s my job – to leave the world a better place. If you have a cultural history as the person who isn’t wanted, then you have an obligation to help those who aren’t wanted. [As Belkin concurs however, not every Jew speaking out about Yonkers was on the NAACP’s side.]

“Show Me a Hero” is about politics and race. In recent weeks, we’ve seen Black Lives Matter shift the conversations of some of the candidates running for president — including Hillary Clinton and Bernie Sanders. When it comes to national policies around affordable housing in the United States, what do you hope we’ll hear more about this election season?

I think we’re hearing them. Isn’t it amazing that we made a miniseries about municipal housing? Who makes a miniseries about public housing policies? Now, people are talking about public housing policies. I’ve said before that “this is more resonant today” – people weren’t ready to tackle it. They were so bruised, those who were advancing that cause.

The Obama administration just pledged to enforce fair housing with new vigor – you can’t take federal funds to segregate your city. The Supreme Court has said you don’t have to reach the bar of showing [that segregation is] deliberate, you just have to show that the end effect is segregated.

People are beginning to understand, with Ferguson and Baltimore, the idea of two Americas, two Americas that can’t understand each other because they stand on different (literal and metaphorical) sides of the street and look at the same country through different eyes, because we don’t need to be near each other because of the way we constructed society. I think we are hearing more of the conversation, I hope, that we should be hearing.

There’s this moment in the second episode, when a protester says, “He’s a Jew…. They all are. That’s why this is happening.” How prevalent has this sentiment been – when the book came out and now?

I was struck by how virulent the streak of anti-Semitism is; there are several scenes, in both the book and the series. The fact that it was a Jewish judge and lawyer that was doing it – it became a lightning rod. David and I were both aware of that.

It was definitely part of the reaction – not the main part. The people who protested this, I have always believed, thought that they were not prejudiced, not racist, that this wasn’t a question of race, that it was protecting their investment. It was about fear. That fear was about people and lifestyles different from theirs.

This story seems like the ultimate precursor to the dialogue now being had around white privilege, including in the Jewish community. When you wrote “Show Me a Hero,” did you imagine this conversation would take hold?

White privilege wasn’t a concept then. It existed, but it wasn’t part of the conversation. There’s one story I wish had made it into the miniseries. One of the women who was protesting this was leading a pretty much parallel life, with a daughter about the age of one of the tenants in the story. This mother’s daughter came to her and said she was pregnant. The point was that this woman was looking at these people on the “wrong” side of town — why are they having trouble? why are they running amok? — yet she was dealing with exactly the same thing. Yet it didn’t destroy her daughter’s life in the same way. There were different supports and privileges on the other side of town.

How do you see “Show Me a Hero” differently now, after all these years?

This has been a reunion. [The people I originally interviewed for the book] were there for the filming. It’s been amazing to see what they’ve made of their lives. This [low-income housing] was supposed to be a stepping stone. Not in every case, but in a gratifying percentage of cases it really worked that way. Their kids are now grown. You don’t usually get that as a writer.

Also, I understood that it’s far more complicated than I’d realized. I don’t think that I went in with a view. I went into it with a lot of questions about whether this would work — a personal reflection. For the most part, it did work, and I feel I’m not sure how I’d respond if it were my neighborhood. I understand how it was terrifying. Yet I like to think that if it were done properly, if it were done with care, it’s a good way for people to live with each other.

What do you hope viewers and readers of “Show Me a Hero” will take away?

I hope it gets them thinking, How would this feel if this were us? That’s what all the people who made this, and me, who wrote this, want.

“Show Me a Hero: A Tale of Murder, Suicide, Race, and Redemption” by Lisa Belkin is being rereleased Sept. 1 by Little, Brown and Company. The final two segments of the six-part miniseries will debut on Sunday, Aug. 30 from 8-10 p.m. ET on HBO.

A Chat With Lisa Belkin, the Jewish Writer Behind HBO’s Show Me a Hero’