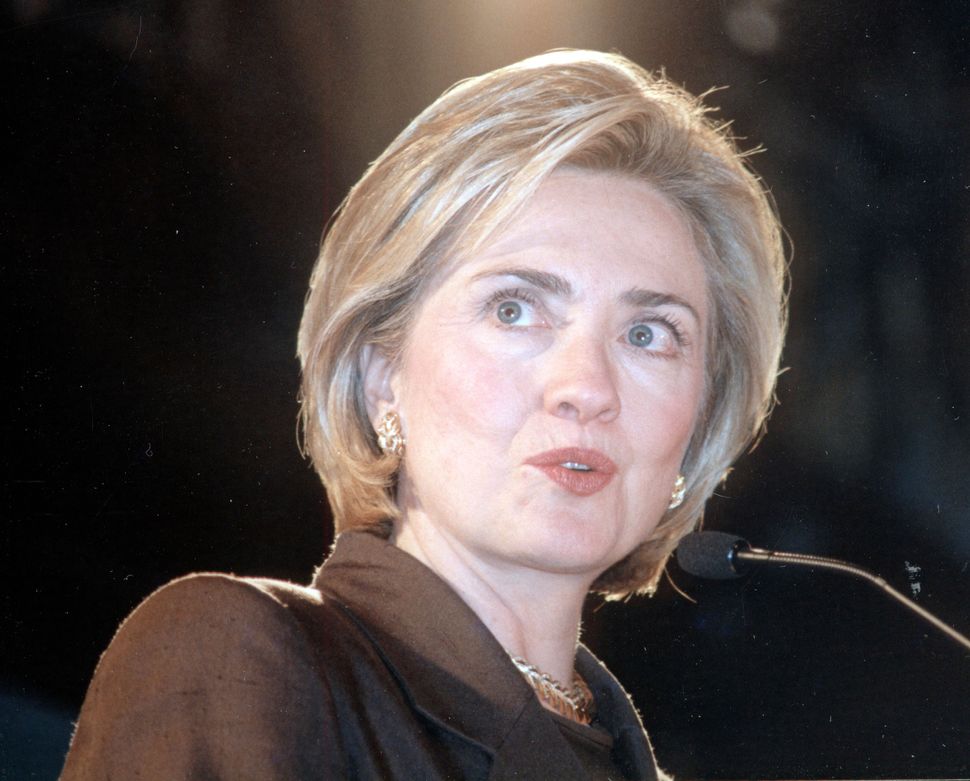 As the Jewish New Year approaches, this seemed an apt moment to revisit a few of the many Jewish events that presidential wannabe Hillary Clinton has graced over the past two decades.

Among my earliest chats with Hillary Clinton was at president Bill Clinton’s 50th birthday celebration in 1996 — a three-part one-day marathon led off with a $1500 per person reception at the Sheraton Hotel, followed by a $500 per ticket star-studded Radio City Music Hall extravaganza emceed by Whoopi Goldberg, followed by a $15,000 per person black tie dinner at the Waldorf-Astoria. Have no idea who paid for my tickets for the triple-header that reportedly raised $10 million.

At the April 19, 1999 Jewish Child Care Association’s 175th Anniversary Dinner at Cipriani Wall Street, Hillary Clinton praised the JCCA’s achievements: “Children, family, adoption, independent living programs are nearest and dearest to my heart as well as to my husband…. You save one child, you save the world.” When I told her that Leo Melamed(now chairman emeritus of the Chicago Merc) was a wartime childhood friend, her eyebrows rose. Hillary Clinton had delivered the keynote address at the dinner honoring Melamed at the Chicago Hilton. “Wasn’t that an incredible event!” she exclaimed.

At Yeshiva University’s December 11, 2005 Hannukah Dinner and Academic Convocation at which Senator Clinton was “hooded” with an honorary Doctor of Law degree she told the 800 guests: “With the timeless teachings of Torah…come responsibilities to repair the world…. The future of this country is intertwined with the future of Israel and the Middle East… Both share a bond in the fundamental belief in the rights of men and women.” A bit late, I did not have a chance to change out of my red patent leather boots into “black tie” heels. As Clinton — with Yeshiva U president Richard Joel at her side — headed to the Waldorf-Astoria’s Grand Ballroom, Hillary spotted me. “Masha! Where did you get those boots?” From a Swedish store I told her. “Nice!” she nodded. 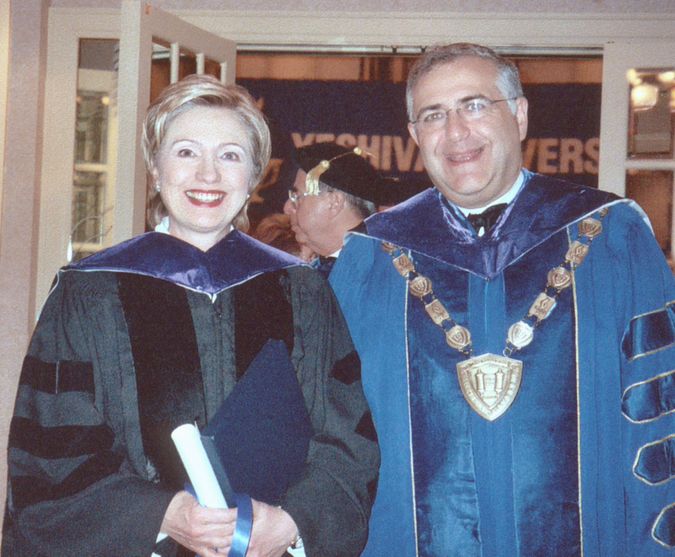 Hillary Clinton and Richard Joel in 2005 Image by Karen Leon

Shouts of “We love you!” greeted Senator Hillary Clinton, keynote speaker at the September 18, 2008 National Labor Division State of Israel Bonds dinner honoring Stuart Appelbaum [then] president Retail, Wholesale and Department Store Union, UFCW. Turning to Clinton, Appelbaum declared: “I was at your wedding years ago and today I feel as if you were at my bar mitzvah…. Your grandfather sold bonds for Israel and my uncle was the first Jew to go to Holy Cross.”

At the November 2013 World Jewish Congress’ Theodor Herzl Award Gala at the Waldorf-Astoria’s Starlight Roof at which she presented the organization’s award to Marion and Elie Wiesel, Clinton— in a striking midnight silk blue gown with cheery aide Huma Abedin at her side—was glad-handing well-wishers including Malcolm Hoenlein and Ralph and Ricky Lauren. Spotting me, she grabbed my hands in hers with a “Great to see you!” then wended her way through a gauntlet of admirers.

“When I was First Lady, Elie spoke at the White House as part of a lecture series leading up to the New Year 2000,” Clinton told the international crowd. “He reflected on a century marred by wars, strife and division. Indifference, he told us that night, is more dangerous than anger and hatred.” “Dear Hillary” award-presenter Marion Wiesel answered jokingly, “You’re here, you’re there, you’re everywhere” adding “tonight — you are here for us.” By the time WJC president Ronald Lauder — following a roster of speakers — told the guests: “For almost eighty years [the Congress] has been the voice of the Jewish People around the world. Seventy years and three generations after the Second World War, it is acceptable again, to utter anti-Semitic statements out loud” — Hillary had alredy left. Regrettably she missed Itzhak Perlman’s wrenching performance of the theme from ”Schindler’s List.”