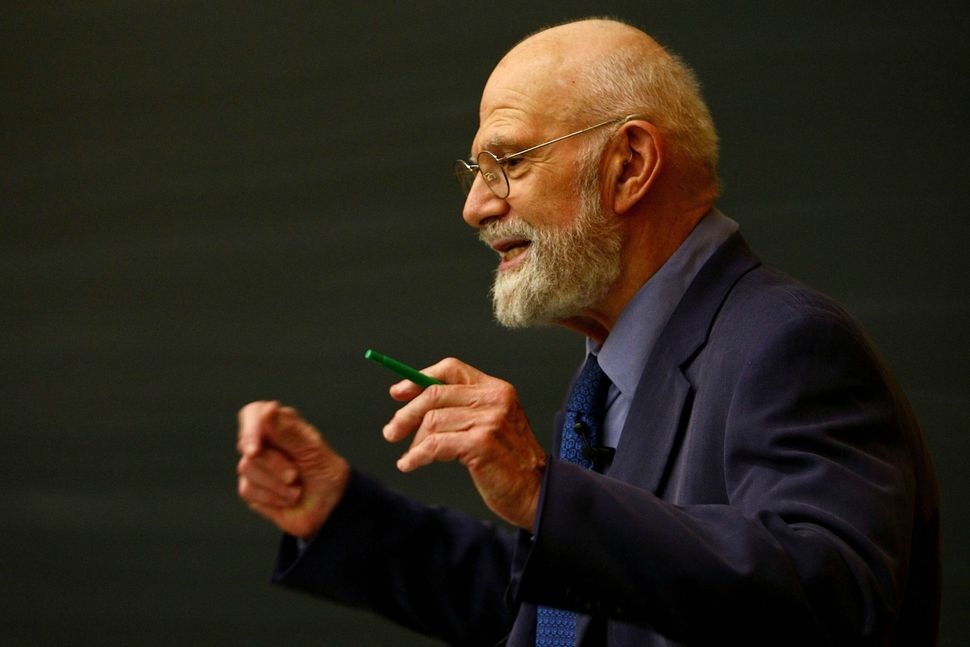 (JTA) — On August 30, at age 82, noted neurologist and author Dr. Oliver Sacks died after succumbing to a cancer that first plagued him nearly a decade ago, paused, and recently reappeared.

One of his last essays, published posthumously, appears in the September 14 issue of The New Yorker and is, surprisingly, an ode to gefilte fish.

“Our gefilte fish was basically carp, to which pike, whitefish and sometimes perch or mullet would be added,” he wrote of his mother’s recipe. “The fish had to be skinned, boned, and fed into a grinder – we had a massive metal grinder attached to the kitchen table, and my mother would sometimes let me turn the handle. She would then mix the ground fish with raw eggs, matzo meal and pepper and sugar.”

Sacks first shared his cancer diagnosis in a February article in the New York Times.

Over the next six months, the writer, best known for his compassionate studies of patients with rare afflictions, turned his keen eye on himself, reflecting on his life through several essays and a memoir, “On the Move,” published in April.

Gefilte fish has long inspired both passionate defense and ire. It is also having something of a cultural moment, thanks to a recently surfaced, cryptically titled email from Hillary Clinton, which was revealed to refer to a shipment of carp facing Israeli tariffs in 2010.

But for Sacks, the traditional Eastern European dish represented the taste and smells of his Orthodox Jewish childhood in northwest London, and the full circle of life.

Though Sacks was not religiously observant as an adult, this food, it seemed, served as an unbroken tie to his Jewish identity throughout his life.

He recounted in The New Yorker essay, titled “Filter Fish,” the successful efforts of his late housekeeper, Helen Jones, an African-American Baptist woman, to fashion a homemade gefilte fish that rivaled his mother’s.

He also found himself craving the food in his last days: “Deliveries now arrive daily from one shop or another,” he wrote, naming a number of well-known New York delis.

A newfound appreciation for Jewish tradition defined much of Sack’s final writings. He articulated this most explicitly in an August 14 article in the New York Times called, simply, “Sabbath.”

In it, he recounted the rituals of his childhood Shabbat in a household headed by two surgeons, who, though they didn’t work or drive, kept the phones operational in case of a medical emergency.

Though he wrote fondly of these times, Sack’s homosexuality was not received well by his parents, and their reaction pushed him away from Judaism.

Over the next several decades, he studied medicine in Los Angeles, dabbled in body building in Venice Beach, struggled with drugs and gained international recognition for books such as 1973’s “Awakenings” and 1985’s “The Man Who Mistook His Wife for a Hat.”

In 2014, Sacks visited family in Israel, his first visit to the country in 60 years, since spending a few months on a kibbutz as a 22-year-old.

In the New York Times essay, he recounted a Shabbat meal during that trip in which he finally felt embraced by his faith, and contemplated what he may have missed by keeping it at a distance.

“The peace of the Sabbath, of a stopped world, a time outside time, was palpable, infused everything,” he wrote, “and I found myself drenched with a wistfulness, something akin to nostalgia, wondering what if…”