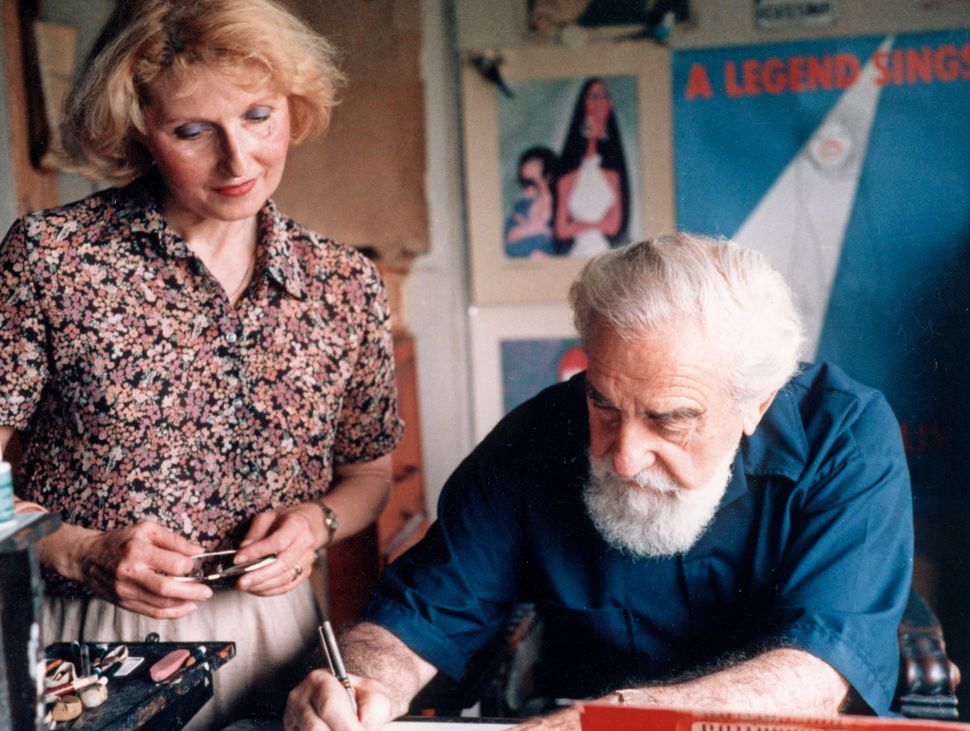 Revisiting “The Hirschfeld Century: The Art of Al Hirschfeld” Exhibit now at the New York Historical Society was akin to a reunion with famous “friends.” Among its treasures: a 1964 image of Mostel as Tevye, a caricature montage of “the 9 Old Men of The Supreme Court of 1937” a jaw-dropping 75 strong Who’s Who of Hollywood stars, a visceral rendition of “The Miracle Worker” ‘s Anne Bancroft with an almost, “audible” Patty Duke, plus his signature N.Y. Times’ Broadway opening montages with the hidden “Ninas.”

After meeting Hirschfeld at a performance of “The Chopin Playoffs” in 1986, he invited my daughter Karen and I to his East 95th Street townhouse (which he revealed he had purchased in 1947 for $27,000!). Ensconced in a barber chair, Hirschfeld recalled starting as a 17-year-old at the then New York-based Goldwyn studios. “I don’t find anything particularly witty about the exaggeration of anatomical features. If someone has a big nose, to make it bigger is no accomplishment. Drawing Jimmy Durante a number of years ago, I left the nose off… There is something mysterious that happens, a kind of communication and recognition and has nothing to do with a big nose, small nose or color of hair. I try to capture the character of the person. The villains and the heroes are not of my making. They are the playwrights’ creation.”

“I learned to draw in the dark. For years I practiced drawing in my pocket on subways and I’ve learned to read my hieroglyphics…. In the early years it was a trauma. Every week I was called on the carpet. I had an editor, Mr. Markel, and he would say: ‘I go to the theater, I see very beautiful, glamorous people and I pick up the ‘Times” on Sunday and it’s a bunch of animals cavorting around there!’ I told him ‘You want an eye-ear-nose and throat man…. There is no shortage of photographs. I don’t know why you are using me really.’ I never had a contract. And then…it was accepted.”

”My mother — who came from Kharkov, Ukraine — arrived here at sixteen knew no English, but spoke Yiddish, Russian and some German. My father —third generation American — came from Albany. He checked into a boarding house overnight, met this pretty girl who had arrived a few weeks before. They could not communicate in any language but married and had three children. My mother’s philosophy was that no matter what happened, it could always be worse… She’d say locks are made for burglars. Never had a lock on her door — just trusted people. My father was a wonderful fellow, he was the umpire of [a local] ballgame, but my mother ran the family. She was the one who worked as a saleslady at Wertheimer’s. They celebrated their 65th anniversary in this house a few weeks ago.”

“You’ve been hiding your daughter Nina’s name in cartoons for years,” I said. “And since my youngest daughter is Nina we’d rush to your Sunday NY Times caricature to see who would be first to find all the hidden “Nina’s”.

In 1945 when Nina Hirschfeld was born (to Al and Mrs. Hirschfeld, then former actress Dolly Haas) the first “Nina the Wonderful” appeared in a poster background of “Are You With It?” Eventually “Nina” was incorporated into shoes, strands of hair, clothing, etc. When readers caught on to this secret “joke” Hirschfeld began to put a number next to his signature telling the reader how many “Nina’s” to look for.

Even the Pentagon asked permission to use Hirschfeld’s drawing to train pilots. “Blowups of the drawing were to be shown on a full-size movie screen and the student pilots would be required to ferret out the ’Nina’s’ in the drawing.” Grading was based on the speed with which the pilots located the “Nina” targets.

You have until October 12 to see this remarkable exhibit which was organized by Louise Kerz Hirschfeld President, The Al Hirschfeld Foundation and curated by David Leopold.