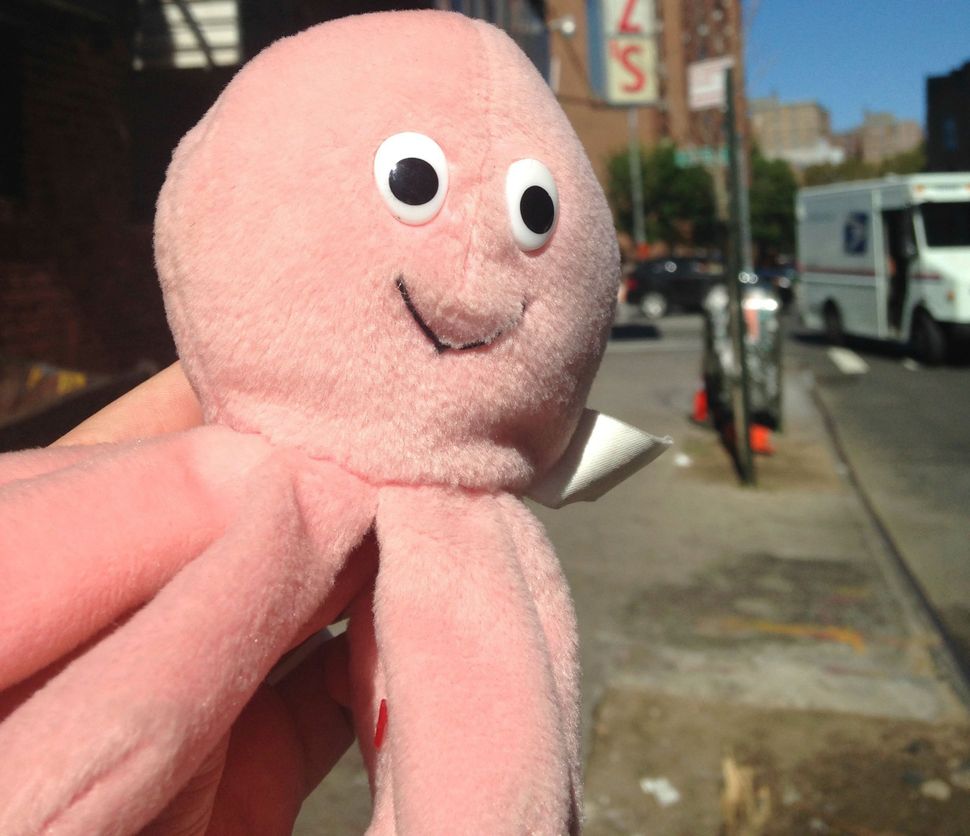 Happy World Octopus Day! At the Forward we celebrated (well, I celebrated) by taking a plushie octopus, Inky, and introducing her to some essential spots for a true New York Jew. (I have only been a New York Jew for two weeks, so I didn’t really know where we were going – don’t tell Inky.)

There’s a huge amount of Jewish history scattered across New York’s boroughs, but this adventure was restricted to the Lower East Side, which became home to large numbers of Jewish immigrants from Eastern Europe around the turn of the twentieth century. It has a special place in my heart, since I grew up reading Sydney Taylor’s “All-of-a-Kind Family” books, which are set there. It seemed like a good place for Inky’s first foray into Jewish culture outside the Forward’s offices.

The First Cemetery of the Spanish and Portuguese Synagogue Congregation Shearith Israel, est. 1683 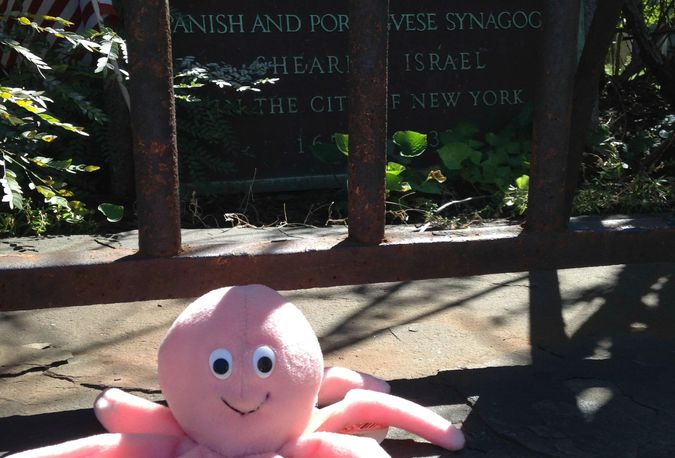 Our first stop was the oldest Jewish cemetery in the United States, also the resting place of the first American-born rabbi. It’s tiny and easy to miss, and we walked by it three times before I figured out that it was what I was looking for. It’s gated, so we couldn’t go in, but we could see gravestones covered in Hebrew through the bars. 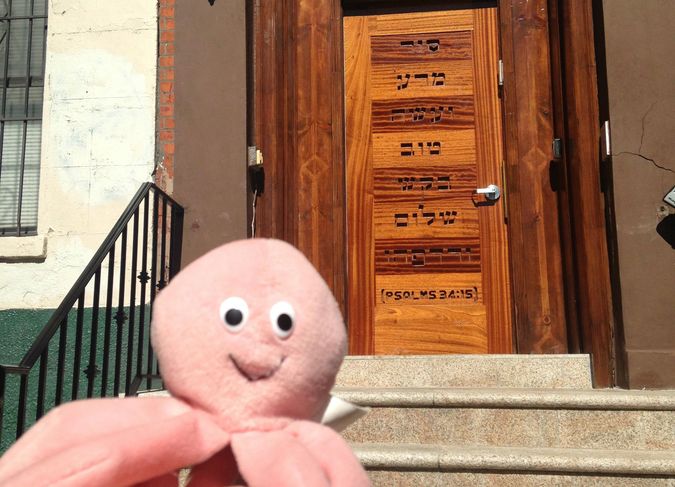 We stopped here because of the beautiful Hebrew carvings on the wood door. This is where I realized it is not normal to stop in the middle of a busy sidewalk to take photos of a Beanie Baby. Still, worth it. 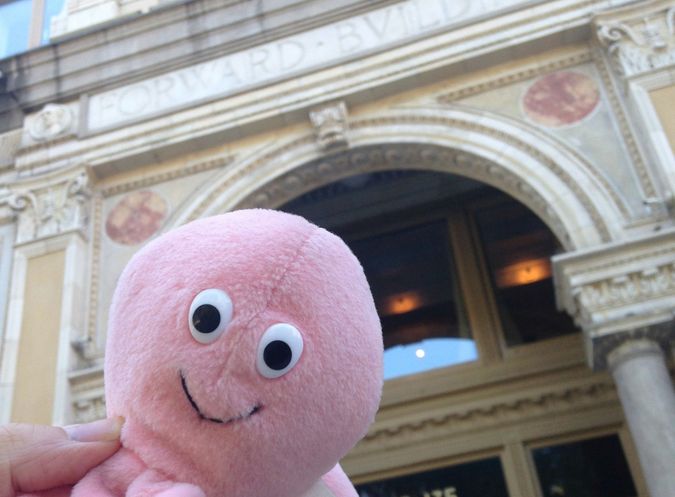 At one point a newspaper called the Jewish Daily Forward/Yiddish Daily Forverts was housed here. Inky asked what happened to it. I told her to wait for the end of the field trip to see.

The Museum at Eldridge Street 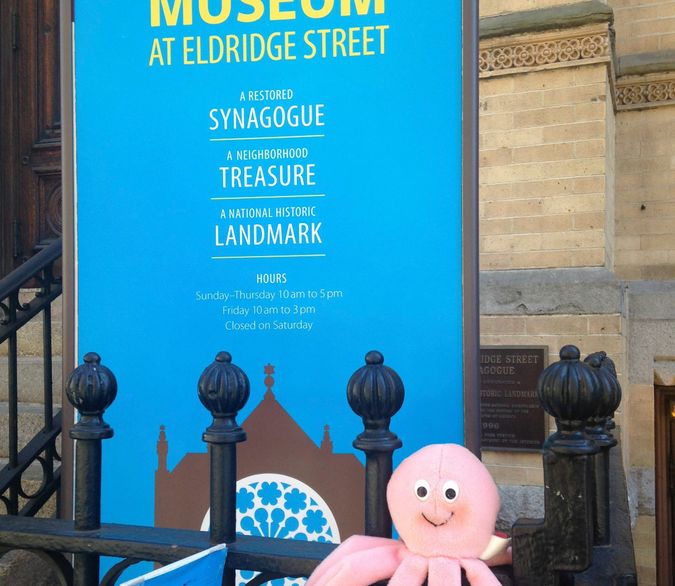 The Eldridge Street Synagogue was built by newly arrived Jewish immigrants from Eastern Europe. It was completed in 1887, and its façade, decorated with Stars of David, celebrates the religious freedom that the immigrants, escaping from pogroms, found in their new country. It’s now a museum dedicated to the Jewish American experience, and it still houses the same congregation, Kahal Adath Jeshurun, that’s held services there since the day it opened. 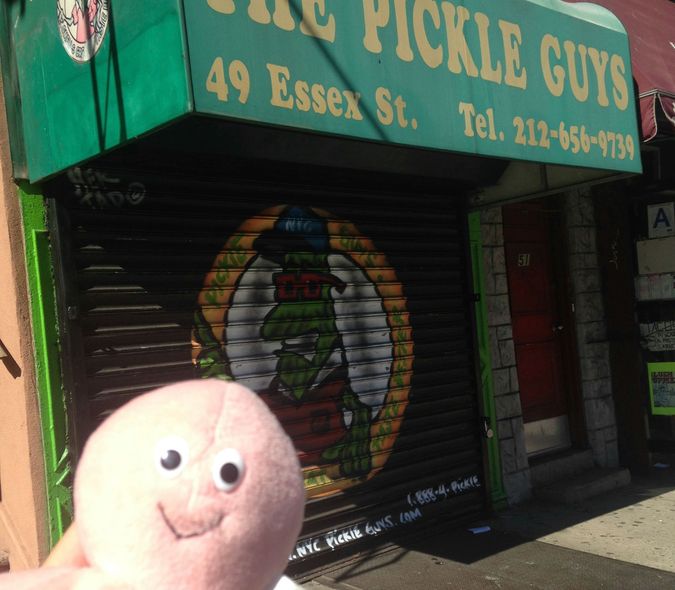 There are few foods more quintessentially Jewish than the humble pickle (we’ll get to some the others soon), and The Pickle Guys embody that ethos by keeping a list of local synagogues on their website. Their products are also Kosher, and their homepage features some stills of Adam Sandler eating Pickle Guys pickles. Hard to beat that kind of dedication to the faith. 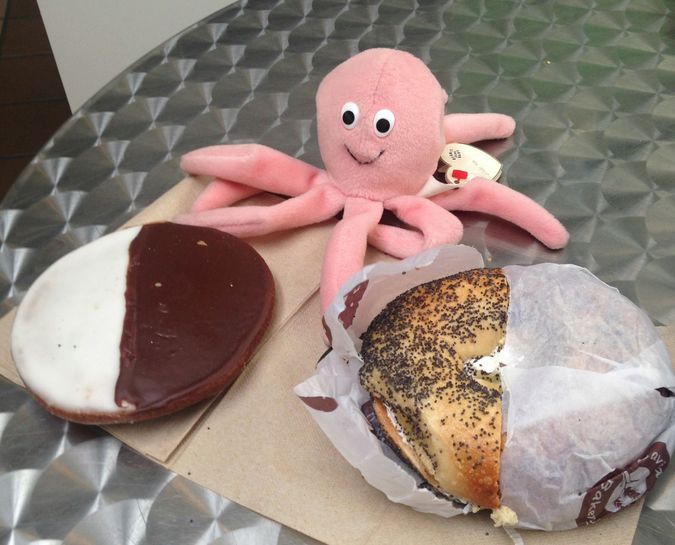 The tour of New York Jewish food continues! Inky got hungry (ok, Talya got hungry), so we stopped for a bagel and a black and white. 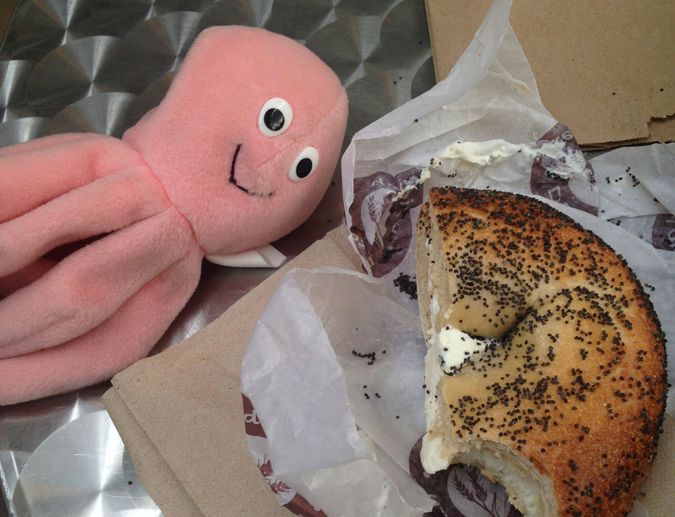 Inky sank into a food coma halfway in. 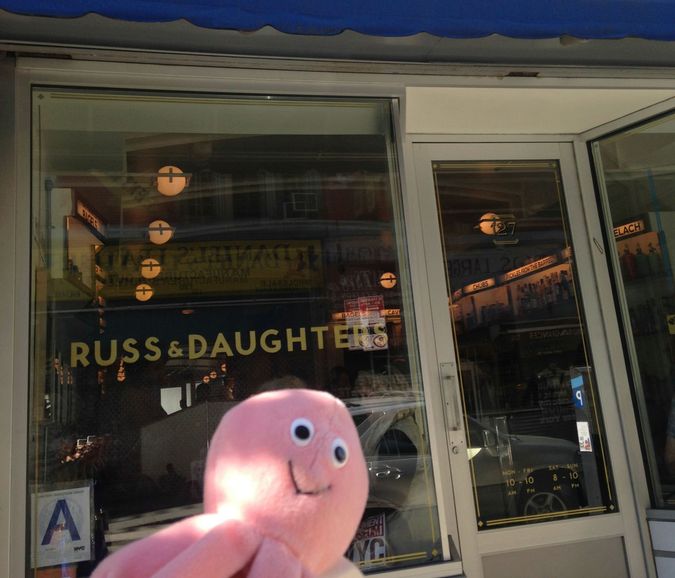 By this point we were unabashedly following the food theme, despite Inky’s food coma. Russ and Daughters had been recommended to me by a huge number of people; we weren’t hungry anymore, but it did look delicious. It’s been operating, in various forms, since 1914 – there’s some real Lower East Side culinary history. 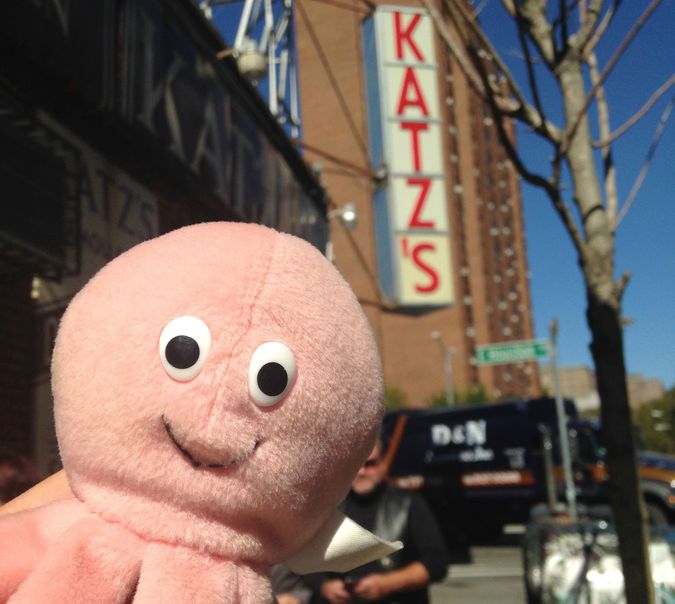 Famous home of this scene, which is not, probably, Kosher. Inky blushed when I told her about it. And talk about Lower East Side culinary history – Katz’s has been open since 1888, although it’s changed names and locations a few times. 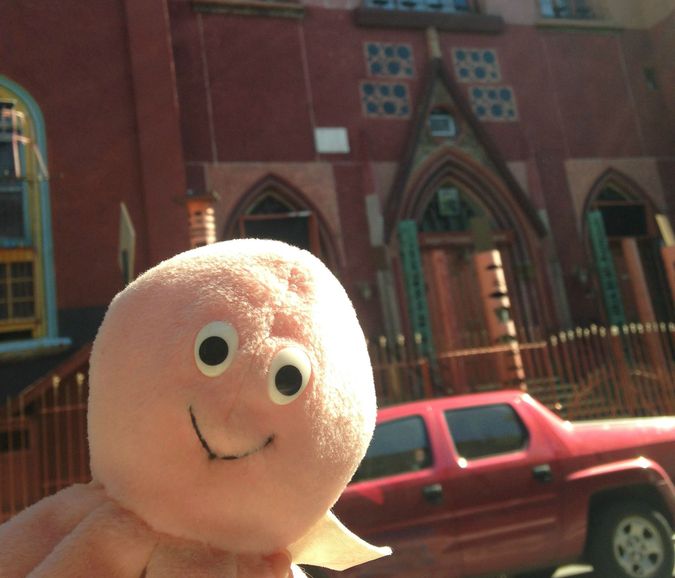 The Angel Orensanz Foundation is housed in the oldest building built as a synagogue in New York City. The synagogue, which was modeled after Cologne’s famous cathedral, stopped housing a congregation in 1974. In 1986, Oresanz, a Spanish sculptor, bought the building and converted it into a center for visual and performing arts. It’s also a Bat Mitzvah hotspot; Inky won’t be having hers for a while, but she’s now determined to have it here. 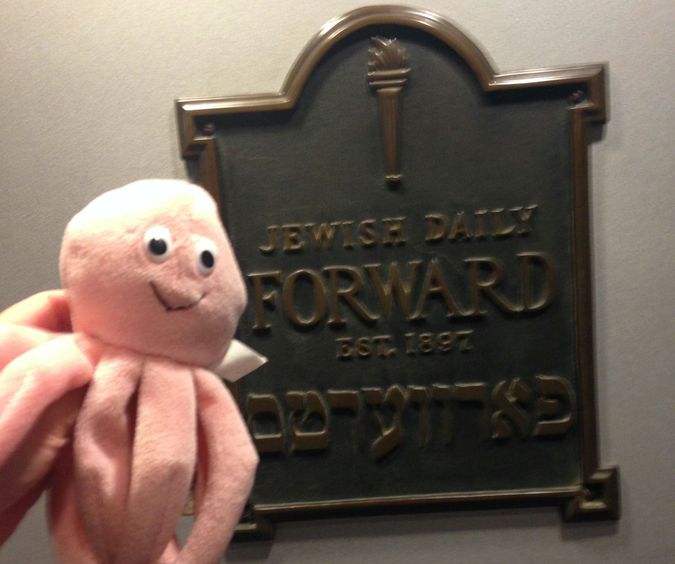 Back home at the Forward at last, Inky was tired but happy after a long day exploring. Happy World Octopus Day to her!