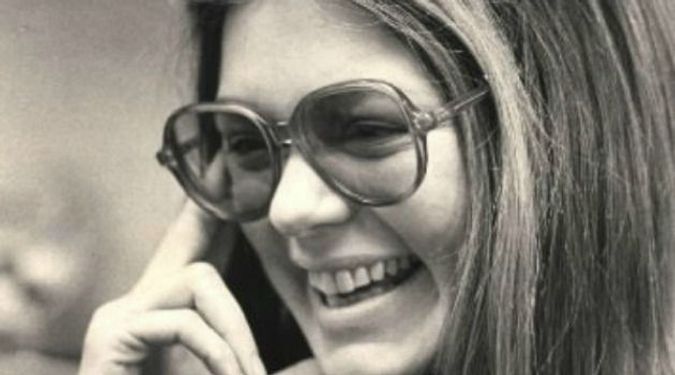 Gloria Steinem wants you to thank people who call you a b**ch.

In an , the feminist pioneer — whose memoirs, “My Life on the Road,” come out October 27 — explained that the best way to shut down those types of insults is with simple acknowledgment. “I mean, it totally disarms them,” she said. “They don’t know what to do. Marlo Thomas always used to say that for a man to be called aggressive, he had to take over your business, but for a woman to be called aggressive, she had to only put you on hold. It’s just a terrible double standard. We have to call them on it. If you call them on it, it changes people’s heads.”

When she wasn’t dishing out badass advice, Steinem shared her thoughts on a number of key topics:

On Hillary in 2016: “I think she could win. In 2008, I felt strongly she couldn’t win because most of us are still raised by women. So we associate female authority with childhood and emotionality and irrationality. We just haven’t seen enough females being authoritative in this rational, adult world. But I think she and many others have now changed enough so that maybe we can imagine it.”

On Beyonce: “I was there when Beyoncé did Chimes for Change — you know, it’s the biggest concert I’ve ever seen in my life, for the Violence Against Women Project — she came out and said to this audience of thousands of mostly women, “I know life is hard, but we’re together for the next hour or so, and you’re safe.” And I thought, OK, you had me at hello. We need to build bridges to those folks, not sit and nitpick what they have on. A feminist is just someone who believes men and women are equal beings.”

On boys: “There’s not like this perfect system, but can you be yourself with him? Can you say what you think and care about? Do you feel like you have to wear your makeup to bed? Can you be your own self with that person? And do they make you better? Some reporter once asked me what the sexiest thing a man ever did for me was, and I said, “Iron my blouse!”

On the leadership gap: “Well, some of them are lousy jobs. It’s not as if they’re the great be-all and end-all. Until men are raising children as much as women are, women won’t be able to be equal in the work place, and we are so behind as a nation, in terms of flexible work patterns and parental leave. The ballgame is to [get women to think] you can’t do it and therefore you shouldn’t try and you shouldn’t disturb the system. You can both be there [in the workplace] and you can have the fun — and it is fun — of making change while you’re there.”

On the legacy of 1970s feminism: “I thought we would be much further. Because I think I was just naïve. I thought things would change if we won majority support for issues—which we have on every issue now, from abortion to marriage equality. But it’s not reflected in the power structure.”

For more, check out the full interview here.