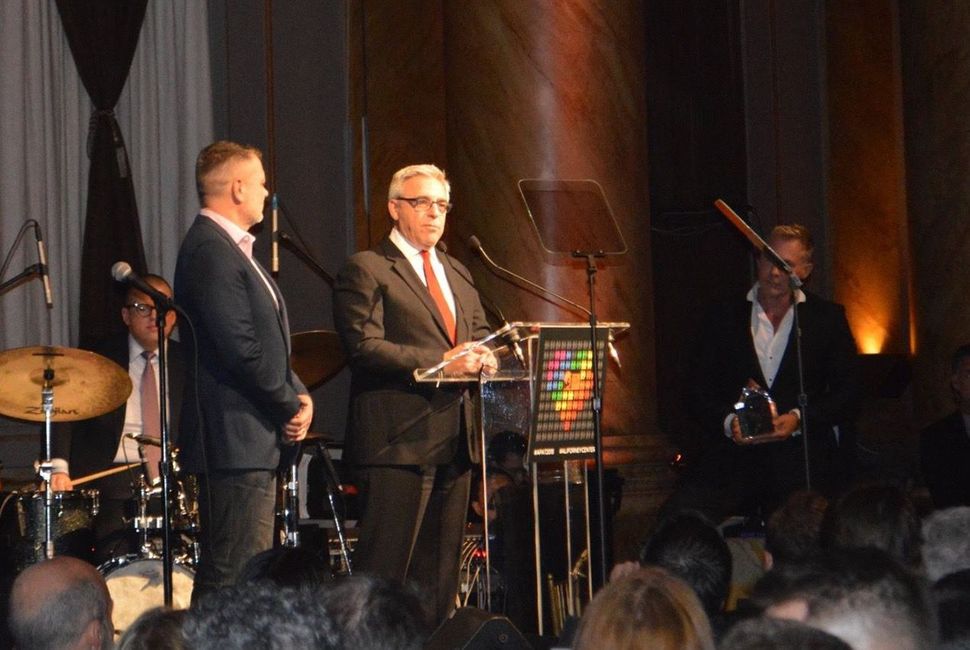 One needs to look no further than July’s gay pride parade in Jerusalem for evidence the danger religious bigots pose to LGBT youth.

An ultra-Orthodox Jew, Yishai Schlissel, was charged with murder after a knife-wielding rampage that left 16-year-old Shira Banki dead and five others with stab wounds. Schlissel had served 10 years in jail for a similar attack in 2005 that injured three.

In the U.S., says furniture executive Mitchell Gold, the stamp of religious and moral disapproval is fueling a national crisis that drives thousands of gay, lesbian, bisexual and transgender youth onto the streets and into harm’s way.

And all too many, like last December’s case of Ohio trans teen Leelah Alcorn, whose parents sent her to Christian conversion therapy, are driven to suicide to end their pain.

Gold, who was born Jewish, but practices “treating people the way I want to be treated,” draws a direct relationship between hatred in the pulpit and a crisis in which 40% of the estimated 500,000 homeless young people on the streets are LGBT.

“The vast majority of these kids are either thrown out or leave their homes because their family’s religion teaches them that LGBT people are ‘sinners and an abomination’,” Gold said Friday night at a benefit for New York City’s Ali Forney Center, a nonprofit that helps homeless gay kids 365 days a year.

“These teachings must stop,” he said in accepting the center’s corporate Spotlight Award for the work he and business partner Bob Williams do on behalf of the gay community. The two gay men are the owners of the North Carolina-based Mitchell Gold + Bob Williams home furnishings chain.

Gold is founder of Faith in America, a national group whose mission is to urge religious leaders to stop teaching that being LGBT is evil and a sin. More than 5,000 people have sign the organization’s Change.org petition.

Gold, who was introduced to the packed gala inside New York’s Capitale by out weatherman Sam Champion, poignantly recounted a recent visit he and Williams made tom the Ali Forney Center.

“We listened as several of these kids told us that at Ali Forney, they feel loved like they never have before. Stop and think about that for a minute. These kids who have suffered the trauma of not being loved by their families have found that love from the staff at Ali Forney,” he said. “What extraordinary work the staff does.”

Gold noted that 2015 has been an extraordinary year for LGBT Americans legally (the marriage equality ruling) and even spiritually.

“Several very prominent, and less so, ministers have come out and said they no longer believe homosexuality is a sin — and that gay people should be allowed to marry,” he told The Forward.

He cited the Rev. David Gushee, a Distinguished University Professor of Christian Ethics at Mercer University, a Baptist college and divinity school in Georgia; and the Rev. Tony Campolo, a long time progressive evangelical leader.

“I will henceforth oppose any form of discrimination against you. I will seek to stand in solidarity with you who have suffered the lash of countless Christian rejections. I will be your ally in every way I know how to be,” Gushee said last fall.

“For a kid in an evangelical home in Oklahoma, North Carolina or even New Jersey, that is extraordinary progress and hope. It could save their life,” Gold said.

Gold says he was disappointed, however, that Roman Catholic Pope Francis was muddled.

“Sadly, if I were a Catholic kid, I think I would not quite be sure what to think. The Pope talks out of both sides of his mouth: One day says something encouraging and the next day … He’s certainly better than his predecessor,” Gold said.

He said Francis should have taken up Ali Forney Center Executive Director Carl Siciliano’s invitation “to visit a homeless shelter for LGBT teens — especially because the Catholic kids there are there largely due to the church’s harmful, outdated and misguided teachings.”

Three others were honored Friday night with Bea Arthur service awards. Arthur, the Jewish stage, screen, and television great who died in 2009 at age 86, was a major supporter of the Ali Forney Center.

A new residence for homeless LGBT youth is being built in the East Village and is to be named in her honor.

The Ali Forney Alumnus Award went to Hilal Khalil, who came to the center in 2008 when his family cut him off. He is now in his third year at the City University of New York School of Law.

Friday night’s “A Place at the Table” annual gala for The Ali Forney Center was hosted by funny lady Lea DeLaria, a long time actress and jazz singer who gained major fame as part of the SAG award-winning cast of Orange is the new Black, the Netflix series in which she plays Carrie “Big Boo” Black.