What Happens When You Type ‘Death to Jews’ in Google Maps? 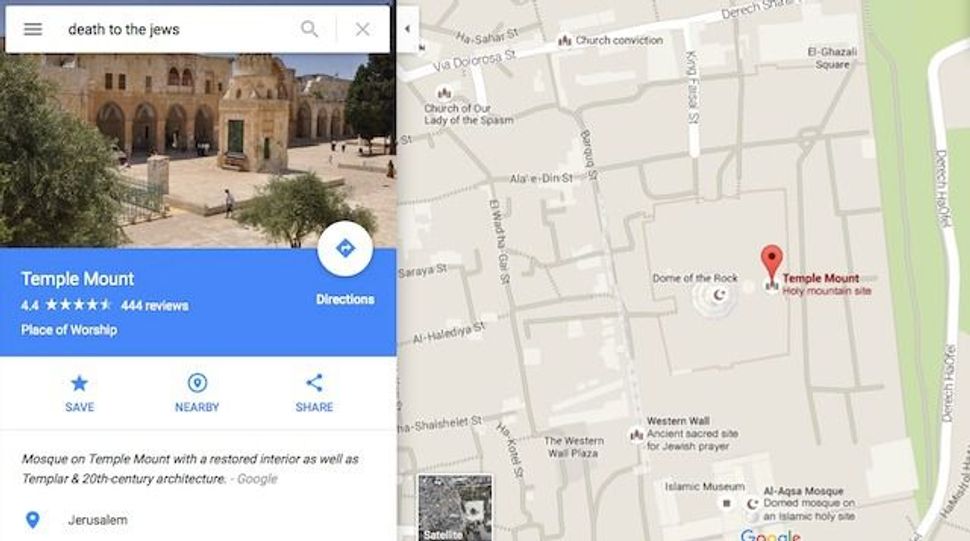 Imagine the call Sergey Brin got when it was discovered this weekend that typing “Death to Jews” in Google Maps in Jerusalem. The Jewish Google co-founder could not have been happy.

They may have fixed it in Hebrew, but in English, “Death to Jews” still leads you to the Temple Mount on @googlemaps pic.twitter.com/SUitIEPDuq

The glitch has been fixed but the search term previously led users to perhaps the most contested stretch of land on earth as the optimal place to kill Jews.

This is not the first time that Google has been questioned for their anti-Semitic search results. As recently as September, if you Googled “Who runs Hollywood?” you would find out that Jews, in fact, run all of Hollywood. How nice for us.

At the time Google said all results are due to a complicated algorithm: “This has been flagged to us, we are working to get it removed as quickly as possible.”

Incidentally, typing in “Jews” in the search engine brings up the Forward as the fifth result, behind Jews for Jesus. Forverts founder Ab Cahan would be so proud.

What Happens When You Type ‘Death to Jews’ in Google Maps?