Watch Hitler Discover the Internet in This German Trailer 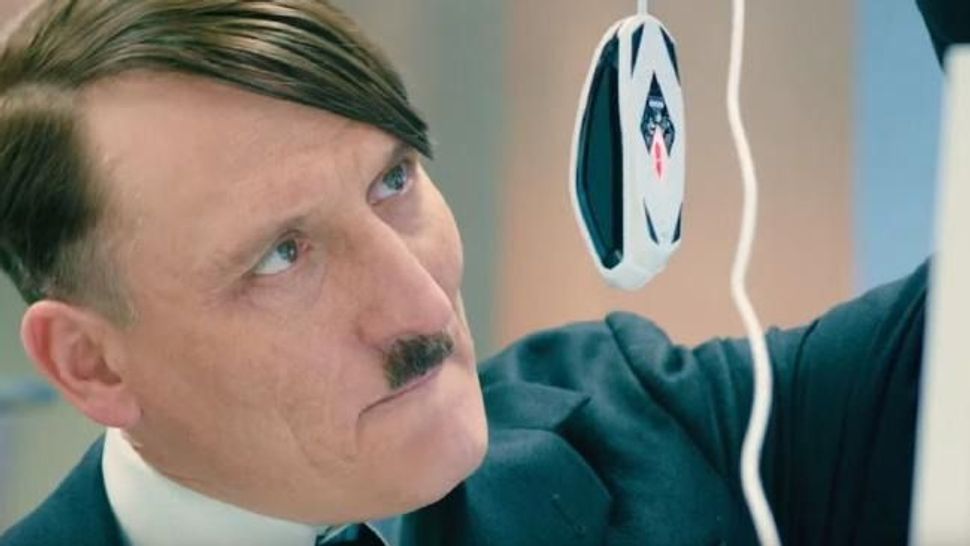 Have you ever wondered what Hitler would do with access to Google? No? Well here’s your chance to find out.

“Er ist wieder da” (Look Who’s Back) premiered in Germany earlier this month and quickly stole the top spot at the country’s box office. The film, based on Timur Vermes’ 2012 novel by the same name, imagines a modern Hitler comeback.

Basic plot: Adolf Hitler wakes up in a vacant lot in Berlin. The year is 3011. He has no memories post-1945, but tries to make sense of this brave new world — from a Nazi perspective. Thus, as Gavriel Rosenfeld wrote in , “he believes the presence of Turks on Berlin’s streets is a legacy of his successor Karl Doenitz’s effort to bring Turkey into the war on Germany’s side. And he erroneously thinks that Wikipedia’s linguistic resemblance to Wikinger, the German word for Vikings, means that the website has Aryan roots.”

Angry that no one believes his true identity, Hitler, who has clearly quickly adopted our 21st century ways, goes on a racist rant during an TV appearance. As a result, he becomes a Youtube sensation and gets his own show. Natch.

The Herald Sun has described the movie’s style as Borat-like, given Oliver Masucci’s (who plays Hitler) “unplanned encounters with with unsuspecting German bystanders.”

The story is undoubtedly funny. Hitler in jeans? And as Rosenfeld wrote in his review, the book managed to “tempers its slapstick style with a moralistic message,” avoiding accusations of being soft on Nazism. By humanizing Hitler, you hold him accountable.

(Spoiler alert: The Fuhrer gets his comeuppance at the end, with the help of a heavy dose of irony.)

But Rosenfeld also pointed out that laughing at Hitler holds its own set of risks: namely, it “normalizes the Nazi past” for a German audience.

“Ever since the films of Charlie Chaplin,Ernst Lubitsch and Mel Brooks, Anglo-American audiences have laughed at Hitler. But only in the past decade have Germans begun to do so. Films such as Dani Levy’s “My Führer” and comic books such as Walter Moers’s “Adolf the Nazi Pig” testify to a growing German desire to become as “normal” as their Anglo-American neighbors and laugh at the Führer. “Er Ist Wieder Da” shows the dangers inherent in this desire, but the book’s best-seller status speaks to its ongoing appeal.”

Whether or not that’s good or bad remains to be seen.

Watch Hitler Discover the Internet in This German Trailer