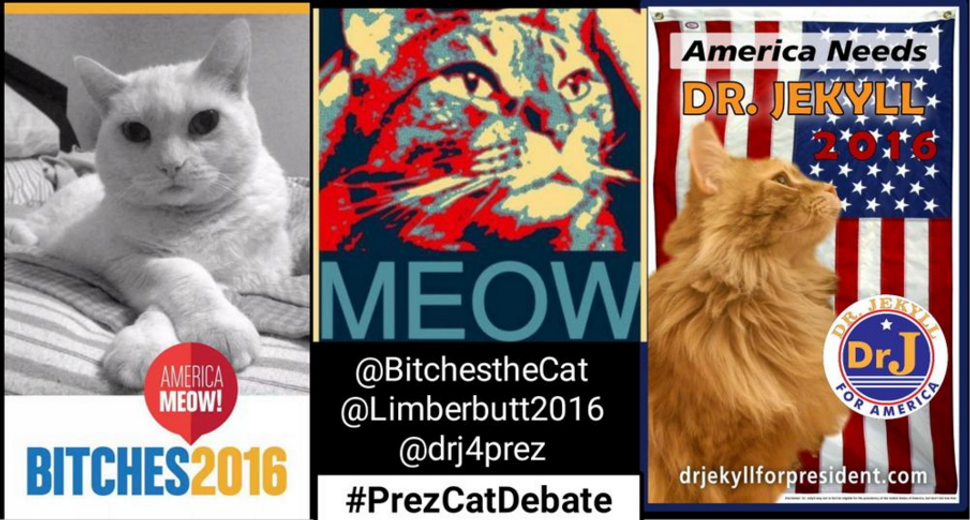 Disappointed with last night’s GOP debate (not to mention the Mets loss)? Have no fear, quality feline entertainment is here.

Jewish owned Demo-Cat Limberbutt McCubbins has some tough and furry competition for the 2016 cat-race. Let’s just hope his owner has enough catnip to keep this fellow going because his new competitors have their claws sharpened and ready for a political catfight.

Bitches (yes, that her name) the cat has over 4,000 followers and her Twitter account already been blocked by Donald J. Trump and Bill Cosby. Talk about about a wild cat. And let’s just say, this candidate isn’t easily im-purr-essed.

Forward thinking feline Dr. Jekyll promises he’ll have a job in his administration for Bernie Sanders.(Though I can’t imagine voting for any cat called Dr. Jekyll. You just can’t know Meowster Hyde is going to come out and start another war in the Middle East!)

Inevitably my opponents will eventually support my campaign & I’ve got a special job for @SenSanders #election2016 pic.twitter.com/n0bEYwu9Oy

We can’t wait for the first cat debate to see what the cat-didates have to meow!