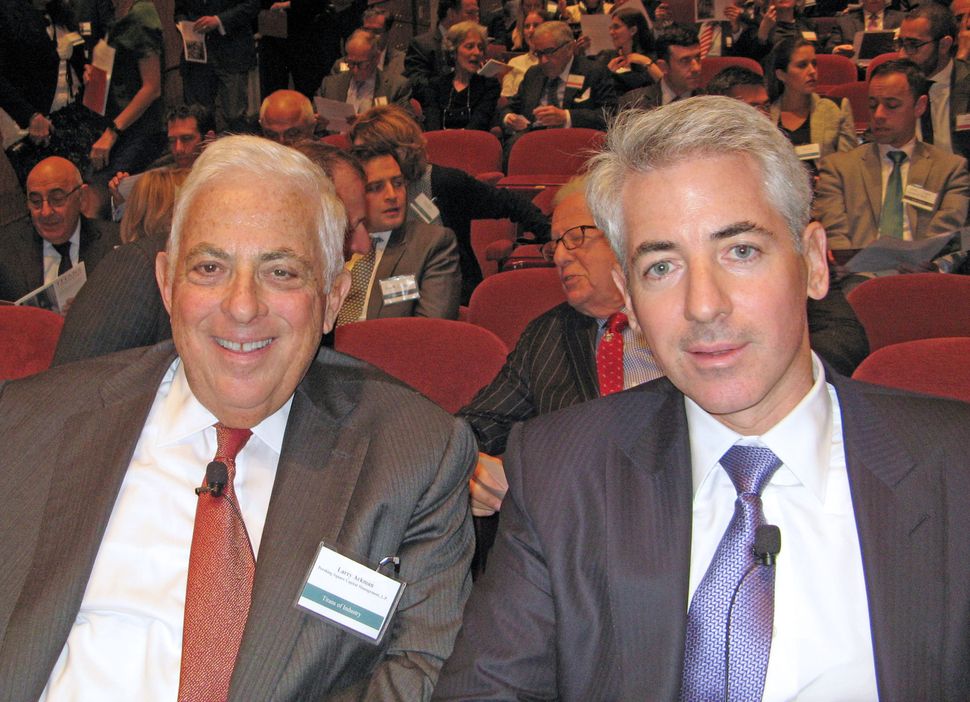 As son Bill made sure Dad Larry was comfortable on stage as he got him water, Ackman senior recalled: “My grandfather came to this country at 18 in 1887. He left Russia to avoid [conscription] into the Tzar’s army—a 25-year service… My father used a little seychl (smarts) rode across the border on a horse to Austria, learned to sew, and took a boat to Castle Garden in 1887. Our whole family owes an enormous debt to Abraham Ackman who came to America.”

Larry Ackman recalled that his father tried to sell a song to Tin Pan Alley. “He sold a song for $100… no way to make a living. The song sold 750,000 copies.” Ackman & Co was founded in 1937 “with a reputation for honesty”… Came out of the Depression in 1939—made $35,000 a year… Really got prosperous after Korean War [with] demand for apartments in Manhattan.” He described the choreography of acquisition of parcels of land sold to developers. The nascence of apartment houses on Second Avenue, East Side, 14th & Park Avenue — deal-after-deal-after deal. Rattled off real estate family names- familiar to many in the audience — options, the sale… resale and resale of —among others—1330 Avenue of the Americas at 54th & 55th Street “which went for $575 million recently. “

Larry Ackman underscored “good business ethics. I discovered that the real estate business is a trust business. Dad came home and told stories about interesting clients — worthy of a documentary.” He recalled “Sarah Korein,” an immigrant from Palestine, and an entrepreneurial lady. When she was a little girl in Palestine the fishmongers would run out of paper so she took all her schoolmates’ workshop papers and sold it to the fishmongers. Sarah came to the US. and went into making second mortgages (1930-1938)… owning properties — i.e. The Delmonico Hotel which she ended up selling to Donald Trump. “She bought the Beresford [home to late Isaac Stern and Vera Stern] (81st & CPW)] for $4 million with $700,000 cash. She ended up selling it for $6,4000,000! which could just about buy a single apartment today. She passed away ten years ago at 94.”

Bill Ackman recalled: “I couldn’t get a job… when I graduated from Harvard, so I went to work for my dad. I worked for you for two years,” he said to his father across the stage. Then went to business school and you wanted me to come back and I came back for one week—then chose to go on my own.”

In what turned out to be a mini “Rashomon” moment, Ackman senior exclaimed “No! That’s not how it happened (roaring laughter). You told me in your 2nd year at Harvard, ‘I’m coming back, I’m looking forward. Son I [was] looking forward to it… Then you met David Berkowitz at Harvard Business School…[and] created a… hedge fund.“ Bill Ackman asserted: “I have a wonderful relationship with my Dad.” as he joined the laughing audience.