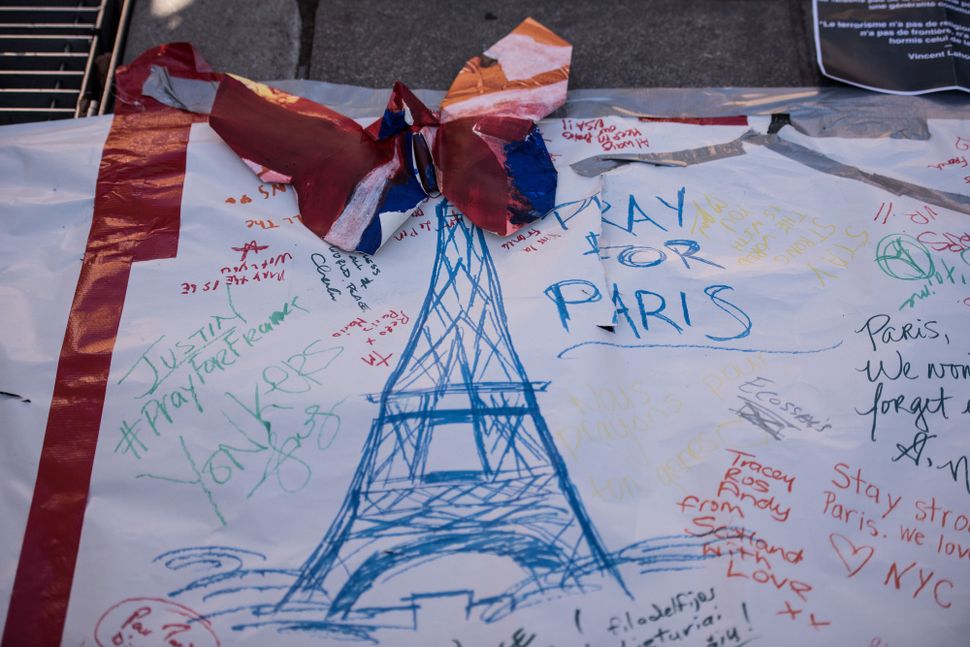 Jewish organizations, politicians and celebrities took to social media to show their support for France after the deadly attacks which rocked Paris on Friday night.

The coordinated terror strikes that took place at several locations throughout the city, including an Eagles of Death Metal concert at the Bataclan theater, took the lives of over 120 people.

In the United States, the ADL called the attacks “an outrageous, cowardly, premeditated assault not just on the people of France, but on all freedom loving people around the world.” The American Jewish Committee wrote: “As the City of Light confronts darkness tonight, we stand with the people of Paris & all of France!”

Other Jewish celebrities like Joseph Gordon-Levitt, girl band HAIM and Israeli model Bar Refaeli, also sent out words of love and hope for the people of the French capital.

See some of the most touching tweets below:

Israel stands with France in war against terrorism. I send condolences to the families of the murdered & wish the injured a speedy recovery.

This was an outrageous, cowardly, premeditated assault not just on the people of France, but on all freedom loving people around the world.

We are deeply concerned at reports that the Bataclan Theater has long been a locus of anti-Zionist groups. https://t.co/AgofUauWo9

As the City of Light confronts darkness tonight, we stand with the people of Paris & all of France! #JeSuisFrancais pic.twitter.com/mVAQBCVkK2

#Israel knows how #France is feeling all too well. Here’s the Knesset right now, lit in solidarity #JeSuisFrancais pic.twitter.com/RPvvy3zlgn

As we head into Shabbat, we also follow news out of Paris. Our prayers go out to all those affected by today’s attacks. We #PrayforParis.

Israel stands alongside the people of France in the uncompromising struggle against terrorism https://t.co/lC1VkVK4m8 #ParisAttacks

Let us not forget, 43 people died in Beirut and 200 were wounded on Thursday..Beautiful Beirut, whose citizens have endured so much.

I can’t believe any of this. So much love to everyone in Paris

My heart hurts for Paris… The city of light is in the dark… We send love to you! ❤️ #ParisAttacks

My heart is breaking for the people of Paris right now. Please say a prayer.

Sending thoughts and prayers to those in Paris.

What to even say? @ Paris, France https://t.co/QWMxPgqkmF

My heart hurts for Paris… The city of light is in the dark… We send love to you! ❤️ #ParisAttacks

Praying 4 the beautiful souls from #Paris to #Beirut to #Japan to #Mizzou. My heart & love is with you all #WeAreOne pic.twitter.com/28D6QkW3mv

Our school shootings r caused by Americans but not all Americans shoot up schools, right? *Don’t forget not all Muslims are Isis*

All my love to Paris