Remembering the Triangle Shirtwaist Fire in the North Carolina Mountains 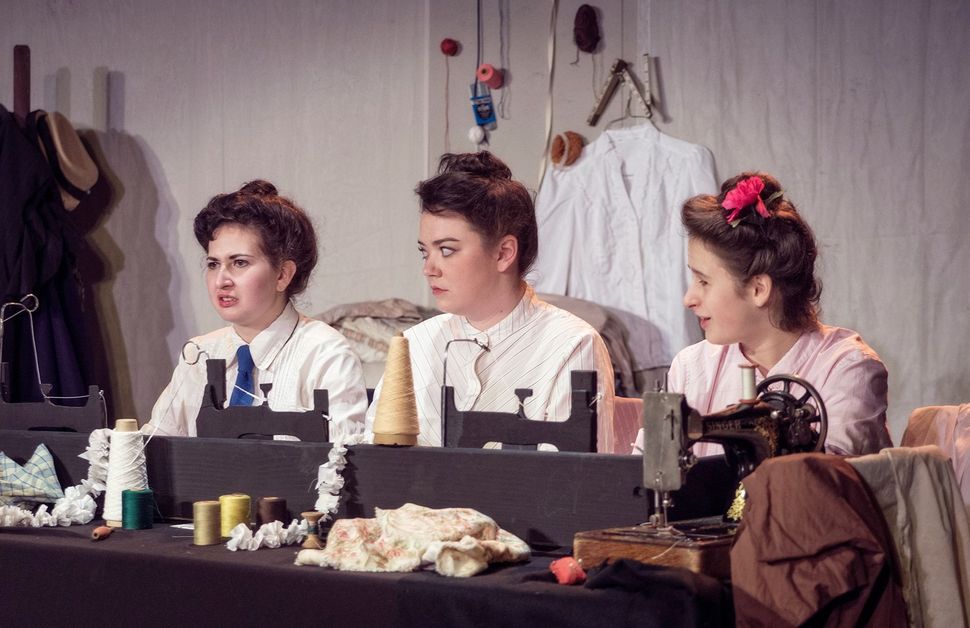 The mountains of North Carolina make an unlikely locale for the world premiere of a Yiddish-inflected play about the Triangle Shirtwaist Factory fire of 1911.

The fact that writer David Brendan Hopes is a non-Jewish local with no personal connection to the Lower East Side tragedy makes the project sound even more far-fetched. But, says Magnetic Theater founder Steven Samuels, “I was taken aback by how David captured the rhythms of speech with such a deft and delicate touch. I wondered myself how he dove so deeply into this world.”

The play — which local weekly Mountain Xpress called “what theater can and should be” — introduces a cast of composite characters at work on that fateful March 25. We meet the ultra-traditional Gussie; Essie, the romantic; free-thinking Yetta; “broom boy” Avi; Italian sisters Lucia and Rosaria; and Mrs. Panno, the Italian overseer.

Hopes “managed to evoke these Jewish and Italian characters in the most charming, thoughtful, even comic way,” says Samuels, himself a veteran of Charles Ludlam’s Ridiculous Theater Company and Washington, D.C.’s Arena Stage, who launched his own theater company shortly after moving to Asheville in 2009.

“I expected a very heavy-handed, didactic, politically-oriented downer,” he says. “I even put off reading it, because I didn’t want to produce a play immersed in such a sad world. But when I finally did, I realized the beauty of it was how alive these people are.”

Playwright Hopes didn’t immerse himself in research, preferring to “allow his imagination to create this world,” Samuels says. “He’s been around long enough to know that if you bog yourself down in research, you can become a slave to facts, and create something really dense.” A University of North Carolina-Asheville professor of Literature, Hopes is also a prize-winning poet, essayist, fiction writer and painter.

Though the play’s not overtly political, “we’re completely aware of contemporary resonance,” Samuels says. “Though the clothing and furniture businesses have faded in North Carolina, we have food processing plants where terrible conditions persist. And of course, the 2012 fire in Bangladesh was a terrible mirror of this. But the play’s set in 1911, and doesn’t hammer at issues. It’s all through the characters.”

Through those characters, there’s even Yiddish song — and a bit of artistic license — in the form of “Du bist dos likht fun mayne oygn,”](http://www.milkenarchive.org/works/view/571) (“You Are the Light of My Eyes”) from the 1937s operetta “Yosl un zayne vayber” (“Yosl and his Wives”). “The fact that it wasn’t chronologically appropriate wasn’t brought to my attention until deep into the production,” Samuels laughs.

The song is reprised just as the fire breaks out. Some of the characters who perish are brought back at the finale to reconcile with the survivors.

“An audience member told me she wanted to give it a standing ovation,” Samuels says. “But she told me she couldn’t move.”

Remembering the Triangle Shirtwaist Fire in the North Carolina Mountains