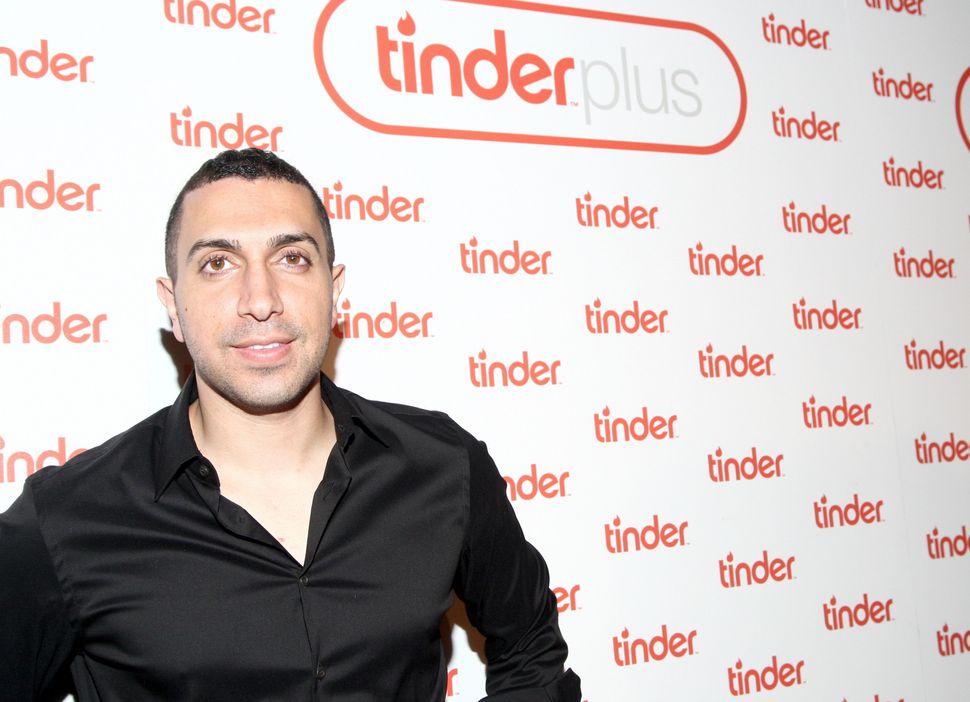 If all you know about Tinder is that it’s a multi-billion dollar location-based dating app that allows users to browse nearby singles, then sit down, get comfortable and read on.

Jewish Tinder co-founder and 10 percent stakeholder Sean Rad raised eyebrows when he gave an interview to the Evening Standard that can only be described as “What Not to Do When You’re CEO of a Company.”

Tinder’s parent company, The Match Group, launched their IPO with an estimated worth of about $3.1 billion on Thursday, only one day after the disastrous interview was published online. Tinder makes up a large percentage of that hefty sum. The 3-year-old app, which allows users to swipe left on matches they dislike or right on those they would like to pursue, has around 80 million users worldwide, and boasts 1.8 billion “swipes” a day.

In the most “swipe left” public moves ever, The Match Group filed a motion with the SEC distancing itself from Rad’s interview in an attempt to thwart the PR-nightmare that might — and really, already has — ensued from Rad’s interview. “The article was not approved or condoned by, and the content of the article was not reviewed by, the company or any of its affiliates,” The Match Group said in a statement.

(Not-so-fun fact: Rad, 29, who was briefly removed as CEO after a sexual harassment suit involving his co-founder and a former employee, dated Alexa Dell, the daughter of Michael Dell, the computer magnate and one of our Forward 50 honorees this year.)

The interview was chock-full of amusing tidbits, but we’ve distilled Rad’s wisdom into nine memorable quotes:

“He admits he’s ‘addicted’ to Tinder — ‘every other week I fall in love with a new girl’ — but right now is single. ‘I’m focused. It’s such a critical time for the company so unfortunately I don’t have a lot of time for any of that.’”

“A ‘supermodel, someone really, really famous’ has been ‘begging’ him for sex ‘and I’ve been like, no’. She’s ‘taunted’ him, he says, and ‘called me a prude.’”

3) He only cares about your intelligence.

“’She’s one of the most beautiful women I’ve ever seen but it doesn’t mean that I want to rip her clothes off and have sex with her. Attraction is nuanced. I’ve been attracted to women who are …’ he pauses ‘… well, who my friends might think are ugly. I don’t care if someone is a model. Really. It sounds clichéd and almost totally unbelievable for a guy to say this, but it’s true. I need an intellectual challenge.’”

4) He doesn’t know what sodomy means.

“’Apparently there’s a term for someone who gets turned on by intellectual stuff. You know, just talking. What’s the word?’ His face creases the effort of trying to remember. ‘I want to say “sodomy”?”

5) Rad is all for democracy.

“’We believe in democracy. If society just wants to “hook up”, who am I to judge?’”

6) You can blame hook-up culture on feminism.

“’That feminism has led to it because now women are more independent and pursuing their desires. And that leads to both parties being more sexually active. It’s not because of Tinder.’”

“His parents are Iranian-born Jews who moved to Bel Air in the Seventies. They are both in the consumer electronics business set up by his grandfather, and Rad grew up ‘listening to complex business issues at the dinner table. I got a masters degree in it by the time I left home.’ The family is sprawling — he has 12 uncles and aunts and 41 first cousins — and he speaks to his mum everyday: ‘I have no choice.’”

“If someone is rude do you blame the restaurant where it happened, or civilisation as a whole? All we are is connecting people. And yeah, there are some disturbing people out there.”

“Look at what’s happening in society. We’re living in a technical age, it’s creating transparency and equality and connecting us. On top of that, women are more independent than ever. Tinder isn’t redefining romance. Progress is.”

And on that note…