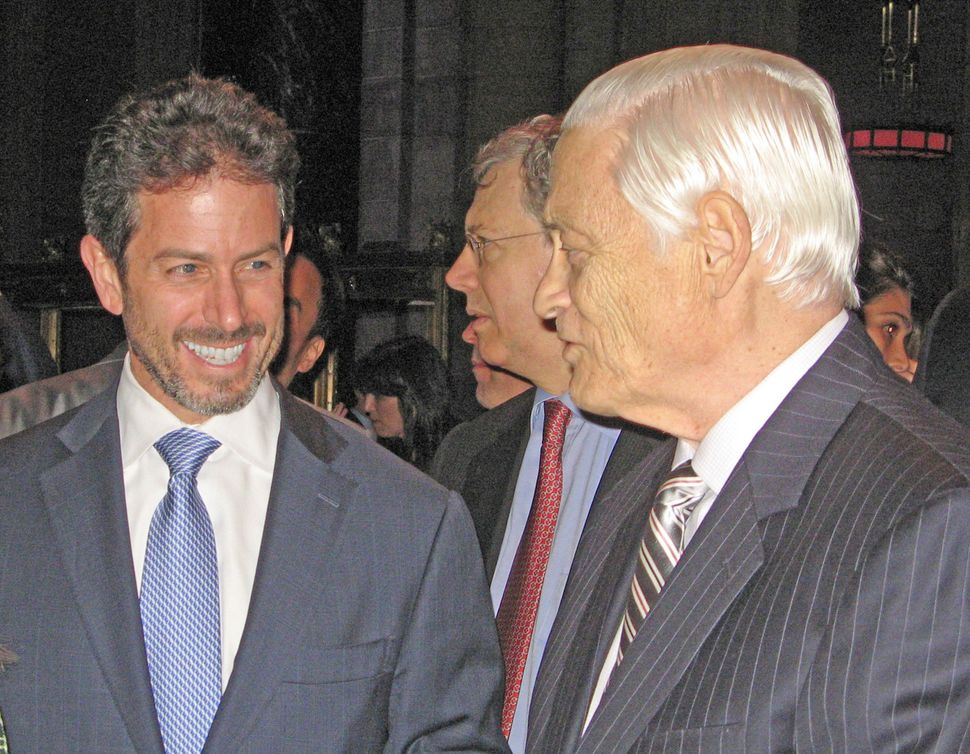 At its “What You Do Matters” New York Tribute Dinner, the United States Holocaust Memorial Museum honored two passionate young visionaries Howard D. Unger and Todd A. Fisher with its National Leadership Awards.

Andi Barchas, Director of the museum’s Northeast Regional Office told the more than 400 guests at Cipriani 42nd Street who helped raise $1.9 million, that “the 40th million visitor to the museum was among the over 90% who are not Jewish. Every year the museum engages 1.2 million people with the lessons of the Holocaust in fifteen languages including Arabic, Farsi and Mandarin…[reaching] young people who are so susceptible to hate propaganda.”

Accepting the award from museum director Sara Bloomfield, Unger — a founder of investment firm Saw Mill Capital, founding partner at Chase Capital Chase Manhattan and a presidential appointee to the Museum’s council in 2011—spoke of being “driven “ by his sense of moral responsibility to help the victims of today… the victims of tomorrow. “This museum is not only about remembering the past but also the ability to take action about our collective future…of Tikun Olam — our obligation to repair the world for those who follow us…. But at the heart of everything is memory — and it is the power of memory that makes the museum such a unique moral platform.”

Fisher—a partner and Global Chief Administrate Officer at investment firm Kohlberg Kravis Roberts & Co. who received the award from U.S. Holocaust Memorial Museum Chairman Tom Bernstein — informed: “My mom’s parents were lucky. They got out. Unfortunately I had many relatives who did not. My grandfather was evicted from his German home at 31 to start life anew in a new country, new language in Scranton, Pa. We have a responsibility to have our children understand the tragedy of the Holocaust and its many lessons. Which is why I’ve taken my family, mom, 10 year-old daughter to Anne Frank’s house… Berlin…

“But what I will never forget is our trip to Wansee — the beautiful lakeside resort outside of Berlin — where in January 1942 fifteen high ranking German government officials met to cold-heartedly plan ‘The Final Solution’ for the Jews! [It was] a bone-chilling reality that genocide is perpetrated by pro-active, maniacal individuals… I have been to the camps, hiding places, bombed-out cities… but what left an indelible mark on my psyche was those 15 highly educated powerful men engineering mass murder…”

“We can’t stop there… We have the responsibility to study the Holocaust not only because of my Jewish identity and heritage, but for the universal message that teaches us about hatred and prejudice… Unfortunately ‘Never Again!’ has not proven to be true. “

In his keynote address, author /writer Philip Gourevitch — currently working on a book on Rwanda — spoke of Primo Levi who arrived in “living hell Auschwitz” in February 1944 in a transport of Italian Jews. He described Levi’s “fear that nobody would believe him or want to listen—a dream turned nightmare of many survivors that they would not be believed or heard. A year before his death in 1986, when he threw himself down the stairs, Levi came to feel that it was impossible to make anyone understand — let alone are – about what survivors lived to tell. It happened before—it can happen again… For us to speak with the young becomes ever more difficult. Levi’s warning that it can happen again anywhere, everywhere was well-founded… the Balkan war, genocide of the Tutsi, Darfur, Burma—everywhere one turns these days we see Levi’s foreboding confirmed. Can’t say today that we did not know. What we do matters.”

To cite both young honorees: “Why this institution is so critical and relative today.”