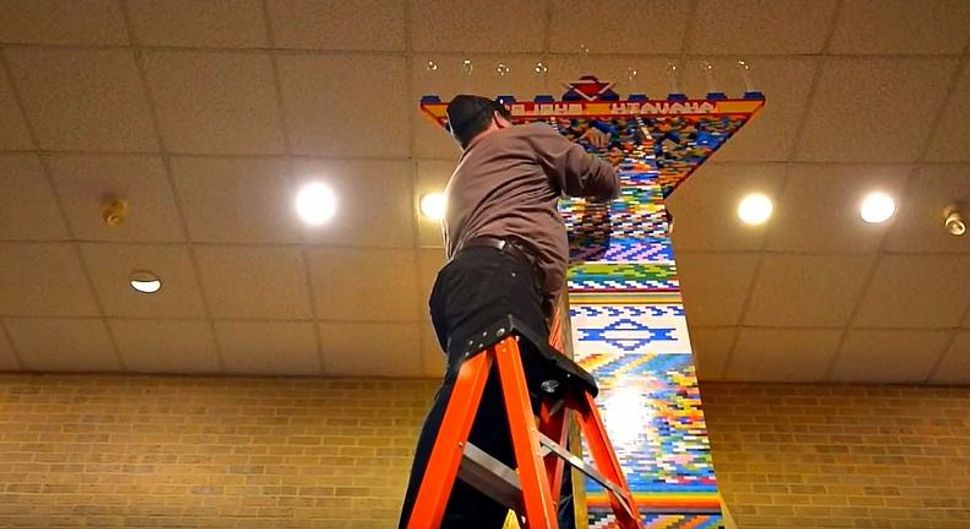 “It was like, 45,000 Legos,” said Mike Lavi, estimating the number of pieces making up the 16-foot, 3-inches tall Lego menorah currently on display at Fort Worth’s Congregation Ahavath Sholom.

Lavi, who designed the menorah, provided that estimate in a video produced by the Fort Worth Star-Telegram showing highlights of the menorah’s assembly. After Ahavath Sholom’s rabbi Andrew Bloom had the idea to build an enormous Lego menorah, the congregation’s president approached Lavi, a structural engineer, about designing it. Lavi began work on the project in July.

Rabbi Andrew Bloom, who came up with the idea this summer, the menorah sets an “unofficial world record.”

“We called the Guinness Book of World Records and they wanted $11,000 to come out and measure it,” Bloom said. “So we decided we’d be in the Google book of world records. We researched online and figured out that 16-feet, four-inches would be the tallest Lego menorah ever built.”

The sound of children clamoring excitedly forms a constant background to Lavi’s voice. They’re seen working together to assemble pieces of the menorah, watched over by their parents. Their excitement over the project is infectious.

Ahavath Sholom intends for that glee to stretch beyond the congregation. “We’re gonna keep it up for a couple weeks, maybe a month,” Lavi said. “And then we’re gonna take it apart and we’re gonna donate all the Legos to different children’s charities so they can have Legos to play with.”

On Sunday, the last night of Hanukkah, the menorah will get its moment in the spotlight: Fort Worth’s mayor, civic leaders and guests from a variety of houses of worship will attend an official dedication, during which all nine candles (most of them electric in order to avoid fire hazards) will be lit.

For now, the colorful menorah almost touches the ceiling from its place of pride on the synagogue’s bimah.

“We tried to get the whole community involved to build everything,” Lavi said. “That was what the rabbi wanted from the beginning.”