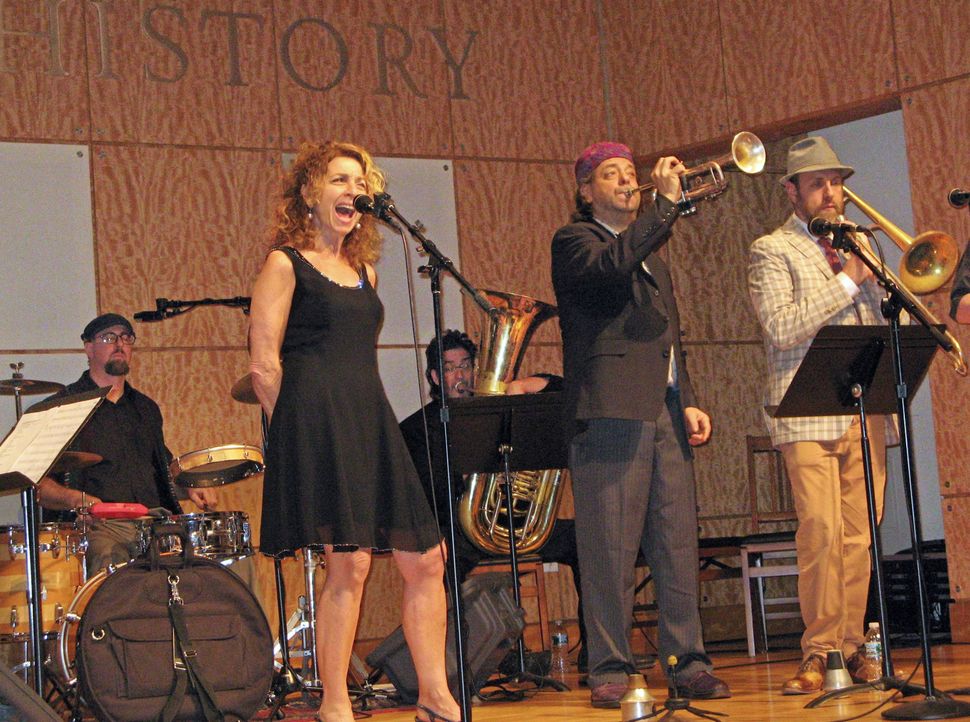 T’was the last night of Hanukkah and the concert hall at the Center for Jewish History was packed for the Annual Chanukah Concert starring the inimitable actor-director-singer Eleanor Reissa who performed both solo and backed up by the ear-shattering, kishke churning pyrotechnics of Klezmatics founder Frank London and the Klezmer Brass All Stars.

Sponsored by The American Society for Jewish Music and The American Jewish Historical Society, the only calm, soft spoken moments were the welcoming remarks by ASJM concert chair Hadassah Markson and — briefly at piano and mic — its president Michael Leavitt.

Following Reissa’s reading [in English) of I.B. Singer’s ”The Squire” from his “The Power of Light: Eight Stories for Hanukkah”, Reissa, in a sexy short sleeveless black dress, posited: ”Why can’t there be 357 days of Hannukah? How can we carry this message forward? My best Chanukah gift is that I am with these guys.!” And then Reissa and the “All Stars” were off and running.

“I was born in a small shtetl with groz (grass) un beymalakh (trees) and children playing in the street — Brooklyn!” (Applause!) “Yiddish was my first language. Engllish I don’t speak so good” joshed Galitzianer accented Yiddish-speaking Reissa — a Tony nominated director, award wining playwright [“The Last Survivor”] and choreographer who boast a 30-years career in both Yiddish and English theater.

“I always thought there were two kinds of Jews—happy Jews and sad Jews… not the most optimistic people, but full of life…and I realized that the happy Jews [in Brooklyn] were the Italians! My mother came from I.B. Singer’s town Bilgorai and spent the war years in Tashkent [Uzbekistan].” Then, switching channels, Reissa declared: “I’m going to sing a Jewish song about being happy—but not too happy.” Intermittently she would follow a Yiddish comment with a spoofy aside that she would translate — “for my Swedish, Flemish, Pashtun friends… in the audience… who don’t understand Yiddish.”

Invoking the now gone grand divas of the Yiddish theater—“Reyzl Bozyk, Shifra Lerer, Mina Bern”—Reissa sang the classic Yiddish lament—“Farges mir nit”— do not forget me! After interpreting a song about “not so nice girls” written by Molly Picon, she lamented: “When Molly Picon gets a ‘who’? we might as well pack it up.” She also served up a nostalagic Yiddish rendition of “I Love Paris”.

The audience was enraptured and transported to other times and places-The Lower East Side, a shtetl, a Catskills bungalow or grand hotel— as Reissa churned out the oldies and goodies [in Yiddish]. Among the standouts—“Bei Mir Bistu Sheyn” (To me You are Beautiful) made famous in its English version by the Andrews Sisters) and for the finale— the classic Ladino Chanukah song about “the eight candles”— ‘Ocho Candelitas’.