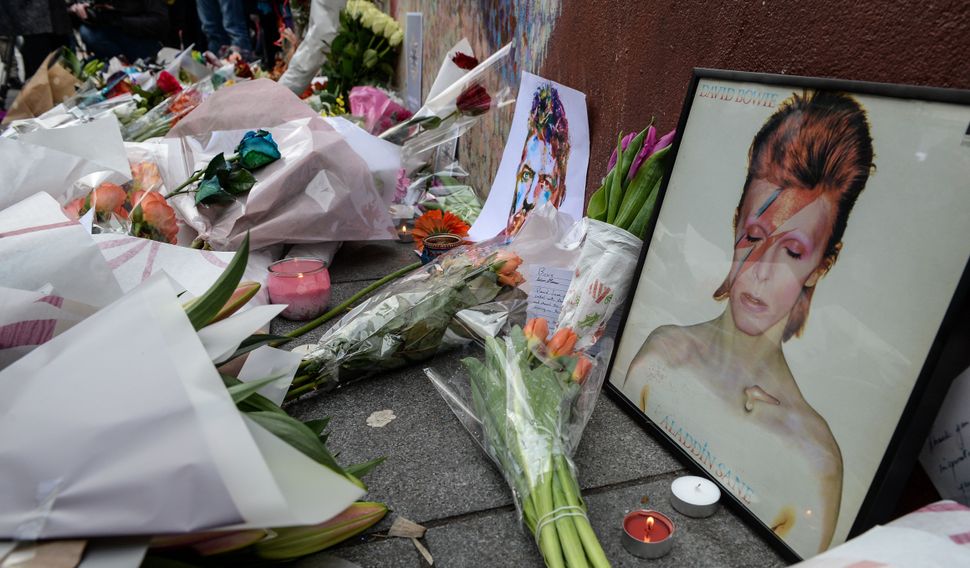 Some knew him personally or once rocked out with him. Others were just fans. And at least one was a former neighbor.

From Ben Stiller to Adam Lambert and Debra Messing, Jewish celebrities took to social media Monday to mourn the loss of David Bowie.

Kind of feels like we’re still hanging at the party after the coolest guy left. #RIPDavidBowie #genius #humble #gracious

He is the first and foremost Glam Rockstar. Rebel Rebel, Life On Mars, Lady Grinning Soul….

A legend has passed.

He fell to earth we were better for it #DavidBowie innovator artist & kind man pic.twitter.com/2dwGVymS2l

Heartbreaking new about the loss of David Bowie. We lived in his building for a time and he was so beautiful with my son. Gentle man. RIP

I just woke up and I’m blown away by the news. This man changed my life. I’d have to write a… https://t.co/pdPqRtbLz3

David Bowie omg! Watch video! So sad! What a genius! My prayers r 4 his family??? Dies of Cancer at 69 – artnet News https://t.co/rT4acp5fAA

Do you remember a guy that’s been In such an early song? I’ve heard a rumor from Ground Control Oh no, don’t say it’s true

He changed everything. RIP to a visionary, a game changer, a force. https://t.co/IohAHpWP7v

Anyone who knows me at all, knows that I will be in serious mourning for a while. #bowie pic.twitter.com/dTDRG0cei8

But also celebrating the man that introduced me to androgyny, glam, & rock ‘n roll. He always made me feel less alone in this crazy world.

David Bowie’s legendary performances will always be remembered. Here are some of his best. https://t.co/VRq0CyXi02 pic.twitter.com/6Mm8ldmQWY

The prettiest star, all because of what you are. Bowie forever and forever will I thank you for you. pic.twitter.com/nGXnDkYCW4

It feels like we lost something elemental, as if an entire color is gone. #DavidBowie

When someone is larger than life itself, you take for granted that they will be around forever, timeless as their work. #DavidBowie RIP

David Bowie, you will be sorely missed. Bowie’s “Changes” and the Ziggy story songs were a major influence for me. pic.twitter.com/N1nkD9h82W

Bowie is a constant reminder to be exactly who you are and to never stop expressing your awesome self.

It never even occurred to me that David Bowie *could* die. RIP.

What terribly sad news to wake up to. One of the immortals. #AshestoAshes

RIP David you have left us too soon! https://t.co/ZW5llCCYkH