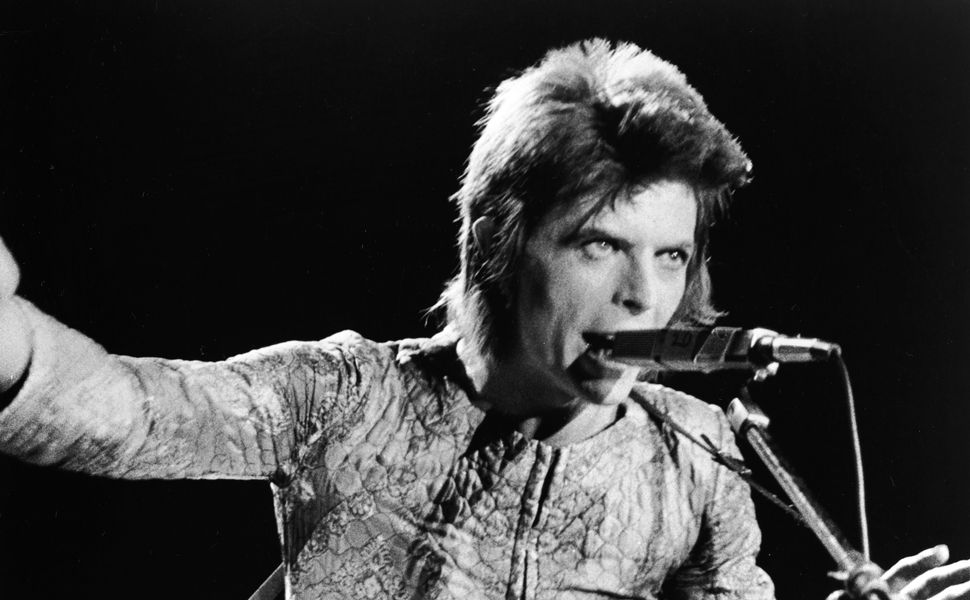 (JTA) — David Bowie didn’t start his first trip to the United States with a drug-filled party or a wild show, but with a quiet evening at the home of a Maryland Jewish family.

The late English rocker had just released the album “The Man Who Sold the World,” which built on the success of his popular “Space Oddity” album in Europe. But he wasn’t yet a household name in the States when his first U.S. tour was set to kick off in January 1971.

Bowie’s North American publicist, Ron Oberman of Mercury Records, invited him to stay with his parents in Silver Spring for a night before setting out to play shows in cities from New York to Los Angeles.

Oberman’s younger brother, Michael Oberman, a music journalist for the now-defunct Washington Star who had been writing about Bowie for a few years, picked the rocker up from the airport. Bowie was pre-Ziggy Stardust phase — which was characterized by strange costumes and a mullet of orange hair — but as the younger Oberman recently recalled to the Washington City Paper, his unorthodox appearance was enough to strand him in customs for four hours.

Michael Oberman had to explain to his parents who Bowie was, but they welcomed him into their home. The Oberman brothers and their parents had drinks with Bowie before heading out to dinner. Where they dined is a matter of historical debate.

Oberman recalled that the family took Bowie to a steakhouse, where the rocker’s appearance aroused so much attention that they had to close the curtains around their booth. But biographer Marc Spitz (“Bowie: A Biography,” 2009) has written that the group went to a Jewish deli named Hofberg’s, which was known for its corned beef sandwiches.

Whatever the dining venue, Oberman, who was planning to write a magazine-style piece about the experience, said he ended up talking to Bowie more about theater than music.

“It was part of my job to meet and know these people. It was a rarity to spend that much time with an artist,” Oberman told the Washington City Paper. “It wasn’t an interview, just spending time with him.”

After dinner, Oberman said he took Bowie to his own house in nearby Takoma Park, where they smoked out of a bong (something Bowie had never seen before) and hung out with the band Sky Cobb. According to Oberman, members of the band were rude to Bowie — something they regretted years later when he became an international star.

Still, Bowie seems to have enjoyed his time with the Oberman family.

“In one of his biographies, he called my mother his ‘adoptive American mother,’” Oberman said.