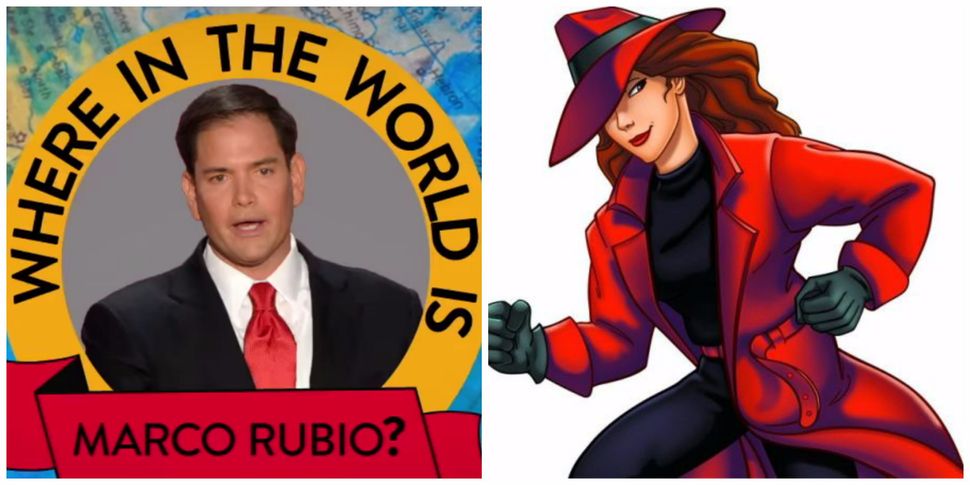 Where in the world is Carmen Sandiego?

Why in a Rand Paul attack ad targeting Marco Rubio, that’s where.

The Jewish composer of the theme music to the children’s educational game, “Where in the World is Carmen Sandiego” is suing the Paul campaign for using his song to go after Rubio for his record of missing votes in the United States Senate.

The disputed ad by Paul, a Republican senator from Kentucky, is called – what else — “Where in the World is Marco Rubio.” Rubio is a fellow senator, and GOP-er, from Florida.

Altman doesn’t want his iconic song used by anyone in the three-ring=circus that the Donald Trump-dominated GOP primary has become.

“I’m a well-known liberal and it just irked me beyond belief that my beloved song would be co-opted by Sen Rand Paul,” Altman .

“This song is my bread and butter. This is literally one of the ways I make my living because it is licensed frequently.”

Politicians have been known to use songs without permission or license for years.

Last fall, R.E.M.’s Michael Stipe went bonkers when the group’s “It’s the End of the World as We Know It” was used in a rally in a Republican rally in Washington. The band filed a $2.5 legal action against Trump and Sen. Ted Cruz (R-Tex.), who were far more friendly back then.

“Go f–k yourselves, the lot of you — you sad, attention-grabbing, power-hungry little men,” Stipe said at the time. “Do not use our music or my voice for your moronic charade of a campaign.”

Variety reports that Altman hired legal ace Larry Iser, who represented Jackson Browne in a case against John McCain for using his “Running on Empty.”

Rand’s campaign charged that Altman now won’t drop the suit so he “can pursue a political agenda or so his trial lawyers can frivolously chase a windfall.”