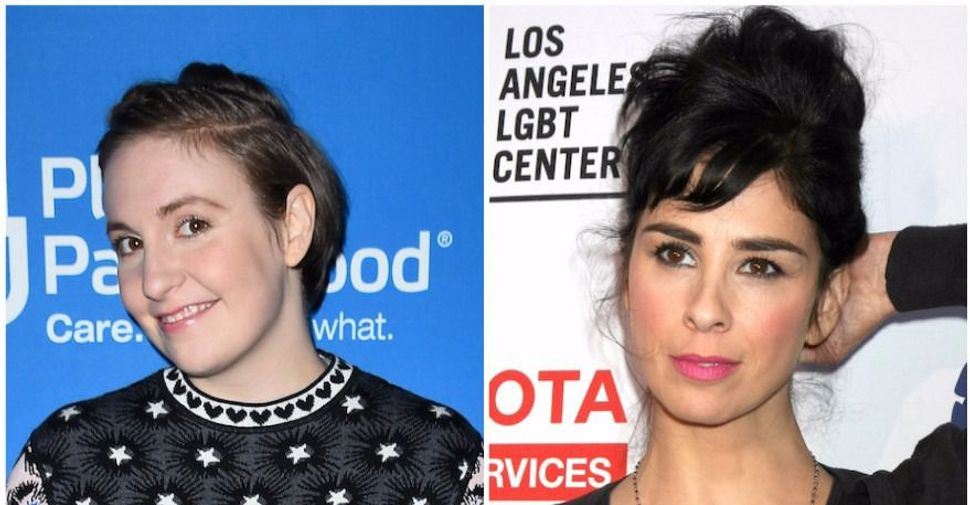 The entertainment industry famously, or infamously, depending on your perspective, leans Democratic. And Jewish celebrities are no exception.

With the 2016 Iowa caucuses kicking off the presidential primary season on Monday, pollsters have Democratic candidates Hillary Rodham Clinton and Sen. Bernie Sanders, I-Vt., neck and neck in the state.

The all-important race for Jewish celebrity endorsements is close too. Here’s a breakdown of where things stand.

The “Girls” creator and star is one of Clinton’s most outspoken supporters. In addition to lending a hand on the campaign trail, Dunham interviewed the former secretary of state-former New York senator-former first lady last fall in an attempt to boost her appeal among younger voters.

The famed director has donated $1 million to Clinton’s current campaign. Back in 2000, it was rumored that Spielberg lent his Trump Tower corporate apartment to Clinton while she was running for the senate — and that he gave her “likeability” lessons.

The “Star Wars: The Force Awakens” director and his wife each donated $500,000 to Clinton super PAC Priorities USA last June.

“[Hillary] does have the experience and the politics. She is compassionate, and right. When I look at the people who need the support that aren’t necessarily getting it, I believe that she would provide that,” Abrams told The Daily Beast on Monday.

“Babs” proclaimed her support on Twitter as soon as Clinton launched her campaign last June.

The comedian and “Trainwreck” creator and star joked last fall that Clinton did not sound thrilled when she offered to help on the campaign trail — but she did offer.

“Rain Man” predicted Clinton would be the next president all the way back in 2012.

The co-creator and co-star of Comedy Central’s quirky hit “Broad City” showed her Clinton pride on Instagram well before it was announced last month that the former First Lady would appear in an episode of the show’s upcoming third season.

The comedian and actress had some kind words for Sanders when she introduced him at a campaign rally last August.

“Where other candidates are getting gigantic sums of money from billionaires in exchange for compromising favors, Bernie is not for sale,” Silverman said to a large crowd.

The folk legends allowed the Sanders campaign to use their song “America” in a recent campaign ad. Paul Simon did not comment on the ad, but Art Garfunkel told The New York Times that he is a “Bernie guy.”

“I like that Bernie is very upset by the gap between the rich and the poor,” Garfunkel said. “I think that’s central.”

The Ben & Jerry’s co-founders are from Burlington, Vermont — which means they have been Sanders constituents for over 30 years as he has gone from mayor to representative to senator. The ice cream mavens, who are now out on the campaign trail, gave out free ice cream at Sanders’ campaign launch last spring.

If that wasn’t enough, Cohen recently created 40 pints of a special Bernie Sanders ice cream flavor — which has a chocolate disk on top of a tub of mint ice cream meant to represent the “1 percent.” By breaking up the disk, ice cream eaters symbolically join Bernie in his crusade to the redistribute the wealth.

Koenig, the singer of New York indie band Vampire Weekend, performed this past weekend at a Sanders event the University of Iowa. Sanders even got on stage to sing when the musicians played “This Land is Your Land.”

Kravitz is the daughter of two half-black, half-Jewish celebrities: rocker Lenny Kravitz and actress Lisa Bonet. She signed an endorsement letter along with 127 other artists and celebrities who back Sanders — from Will Ferrell to rapper Killer Mike — last fall.