Idan Raichel’s Ninth Album is His Most Personal Yet 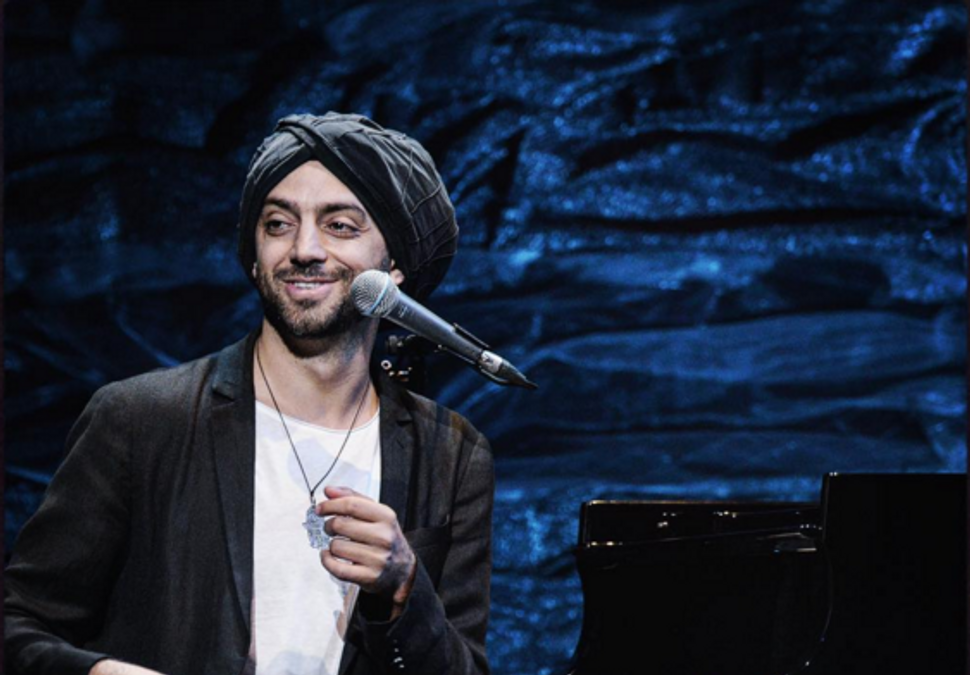 In 2012 and 2014, Raichel, 38, released albums with Malian blues guitarist Vieux Farka Touré as the Touré-Raichel Collective. It’s collaborations like these that offer musically engaging, optimistic perspectives on how creative international exchanges can help foster actual dialogues and mutual understanding.

Raichel’s newest, and ninth, album is truly a solo record. He describes “At the Edge of the Beginning” (known as Ha’Yad Ha’Chama in Israel), which was released internationally in January via Cumbancha, as his singer and songwriter album. He compares the “Idan Raichel Project” and this solo expression to seeing, or listening to, the Dave Matthews Band — full of horns, strings and percussion — versus Dave Matthews solo like on the album “Live At Radio City.”

“It’s not like the ‘Idan Raichel Project,’” he begins in voice-recorded answers to the Forward. “It’s not about traveling around the world and finding vocalists and musicians. It’s very much a journey inside, and letting the audience and the listeners — for the first time — listen to a very intimate voice and a very sincere, honest performance without any theater set or support.”

As a result, Raichel takes an independent approach to “At the Edge of the Beginning.” He notes taking self-reflective time in the studio, recording all of the drum parts and writing all of the arrangements for other musicians to perform.

The album’s subject matter really reflects this deeply personal effort. In the three years since “Quarter to Six,” Raichel got married and had two daughters. He even cut off his signature dreadlocks. He describes this record as representative of the person and professional crossroads in which he found himself at the age of 38.

“At the Edge of the Beginning” tries to capture those elusive feelings of hope, surprise, and excitement — tinged with just a dash of caution and anxiousness — of starting a grand, brand new phase of life. In fact, the album opens with an instrumental entitled “To Wait,” seemingly alluding to the process of finding love and purpose in this world. And love songs abound on the album from the lullaby “Little Girl of Mine” dedicated to his daughters to the guitar arpeggios of “Into the Wilderness.”

The singer imbues the album with a sense of playfulness from songs like “Circles,” which could sound at home on a Gogol Bordello record, to the funky bass riff on “In Five Seconds” and the ‘70s Israeli-pop inspired “Revolving Door.”

Raichel is careful to note the differences between Jewish and Israeli music. An element of each impact yet neither defines the record. Jewish audiences could dance the hora to “Circles,” but the Israeli ‘70s pop isn’t necessary related to traditional dance.

“Jewish music is not always related to Israel. The klezmer music is from the former U.S.S.R. and Poland,” he says. “Not every Jewish person is Israeli and not every Israeli is Jewish…. There are Muslim people and Christian people and everyone lives here side by side.”

Although Raichel answers questions in English and performs with musicians who speak a range of languages, he remains defiant about singing in Hebrew. English translations of song lyrics appear in the liner notes to “At the Edge of the Beginning,” but when Raichel performs, it’s in his native tongue.

“I think the most honest way is just to sing in your own language. I feel that once you are giving your heart, people will understand it no matter what language it’s in.”

Idan Raichel’s Ninth Album is His Most Personal Yet