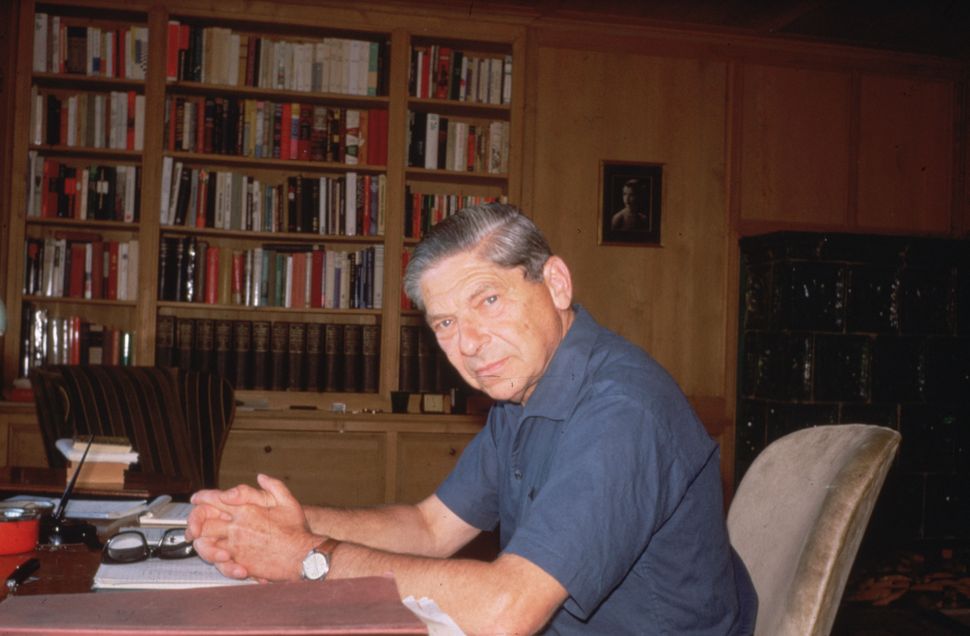 Fans of Arthur Koestler’s 1940 novel “Darkness at Noon,” the formerly communist author’s allegorical take on Stalin’s increasingly totalitarian grip on the USSR, are in for a shock. According to the New York Review of Books, a German doctoral student named Matthias Weßel has discovered one of the novel’s original German drafts.

“Darkness at Noon,” considered one of the great novels of the twentieth century – even, in a choice now perhaps questionable, ranking 8th on Modern Library’s list of the 100 greatest English-language novels of the period – has a famously labyrinthine publication history. The Hungarian-born Koestler originally wrote it in German, one of his first languages, then had it hastily translated into English as the increasing Nazi threat to France, where he was living, made it necessary for him to flee. (Koestler was of Jewish descent and had been a registered member of the Communist Party of Germany, making him doubly a target for the Nazis.) He left two German drafts of the novel in France – one in his Paris apartment, and one with a friend in Limoges – but neither survived the war intact. Although Koestler later translated the novel back into German, its English iteration has been historically been treated as its original text.

That may not be true for long. Since discovering the manuscript while conducting research at Zurich’s Central Library, Weßel has been comparing it with Koestler’s later German translation of the novel. He’s noticed significant syntactic differences between the versions, which he largely attributes to the impact on Koestler’s German of his transition into using English as his primary language. (It is also unclear whether the newly discovered manuscript was a final or intermediary draft; if not final, some of the differences might stem from edits Koestler made in subsequent drafts.)

Michael Scammell, the author of the New York Review of Books’ essay on Weßel’s discovery – as well as Koestler’s authorized biography – has read the newly discovered manuscript. Speaking over the phone with the Forward, he said he believes it could have a profound impact on Koestler’s legacy.

“It was most of all a greater appreciation of Koestler’s skill as a writer of fiction,” he said of his response to the manuscript. “He was a wonderful essayist and a very good reporter. Most of his fiction, and he himself admitted it, was not up to the standard of the nonfiction. But “Darkness at Noon,” which was written in a very short space of time and under extremely difficult circumstances, the story is very colorful. He wrote it at white heat.”

Weßel also believes the differences between versions demand a reissue of the novel.

“The deviations vary widely in quality and quantity,” he said, quoted by Scammell in the New York Review of Books’ article, “but taken together the versions are so different in content and style that there can be no doubt that a new German edition…is not only justified but rather absolutely necessary.”

Scammell, ultimately, thinks pivoting to consider the newly discovered German text the original, and issuing retranslations based on it, are a matter of fairness to readers.

“We’ve only known it in a hastily made translation into English, and a very poor one in many ways,” he told the Forward over the phone. “I think that people, when it’s retranslated, they will see something that’s much richer in its texture and in its content and that’s more faithful to the Soviet reality that Koestler was describing.”