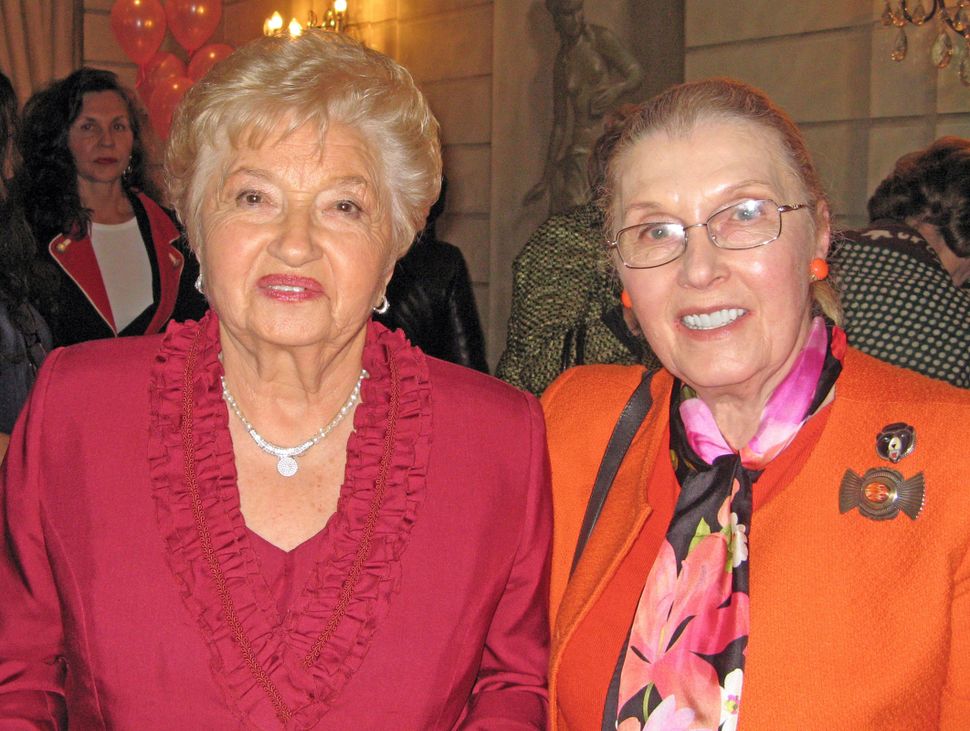 “My mother was a blonde — not from the bottle — she looked like a German gentile woman” is how petite, elegant 80-year old Holocaust survivor Hanna Wechsler recalled her heroic mother and savior at the 24th Annual Museum of Jewish Heritage/A Living Memorial To The Holocaust March 31 Spring Women’s Luncheon held at The Pierre. As more than 300 women watched, Hanna held up a sign and read her own concentration camp number “888 8987” which had been tattooed on her arm upon arrival at Auschwitz.

Born Hanna Kleiner in 1936 in Nowy Korczyn, Poland, she joshed: “I am considered a [survivor] spring chicken.” Alternating in Yiddish and English she described her mother sneaking out of the Proszowicze ghetto, getting false I.D. papers…. being hidden — with 12 others — by a Polish woman who hid them underground and had to let them go when neighbors became suspicious. The improbable rescue by a German officer —“he could have abused her,” — allowing them to stay for 2 days in his house. “ Our escape to — where? We did not know where we were…. what language was spoken, Polish, German. The [shepherds] only understood money…We entered a police station in Romania. [a] collecting place impossible to describe….’We are Poles’ They sent us to Hungary… a camp in Budapest. “The main director was a Wehrmacht officer—better than the SS. He told my mother ‘You and your daughter look just like my wife and child. I am going to help you. Thanks to him…we are here. More food, he put our papers underneath newcomers’…. He was sent to the Russian border for being good to Jews!” 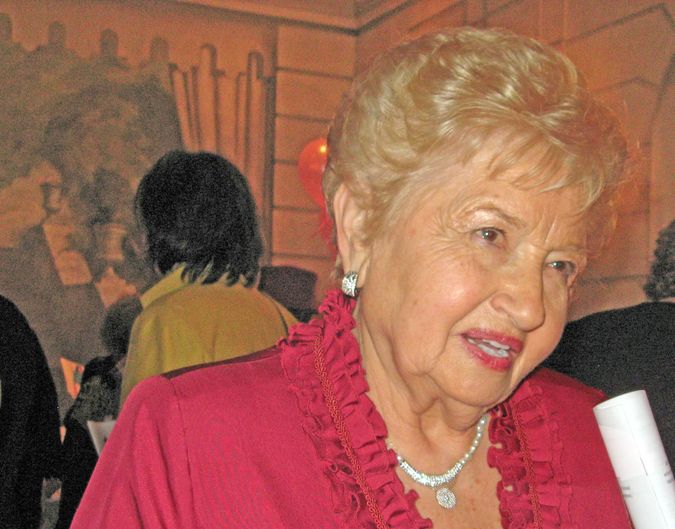 Arriving at Auschwitz “as the gypsies were being burned “ there were more of her mother’s heroic acts. “She stole food ‘for Hanele’…I was left alone in the long barrack — my friends were mice and rats.” When her mother developed a finger infection, —with no medication available to save her life — “she opted to have her ring finger chopped off in the infirmary!” Describing “to the right-to the left” Dr. Mengele’s “selection” process during which the women “stood outside” she recalled her mother asking the naked women to surround her as [my mother] “attached me to her thigh so he would not see me. He tapped my mother on the shoulder: ‘You still have good skin and can work.’…We escaped camp when we heard the Russian soldiers [who] had onlyone intention —to rape those skin and bone women.”

“Any wonder this little girl didn’t turn out more crazy than she is? With age — like antiques — every day you become more valuable.”

Event Co-chairs Patti Kenner and Ann Oster welcomed the 300 guests: “Every single person here is important,” said Oster. “ As in past years, at the request “will survivors in the room rise” three women — two women and I at my table—stood up.

Eliza Schein, Deputy Director of the Museum, touted its “remarkable intergenerational transfer of memory…. Everything we do is dedicated to educating the next generations — 50,000 school children [visited the] museum this past year. This year we inaugurated a new Center for the Study of Anti-Semitism under the leadership of ADL’s former Abe Foxman”. She also acknowledged the partnership with and residence of The National Yiddish Theater — Folksbiene whose executive director Bryna Wasserman and artistic director Zalmen Mlotek were present. Their first production “The Golden Bride”—which originally sold out in five weeks—is coming back this summer!