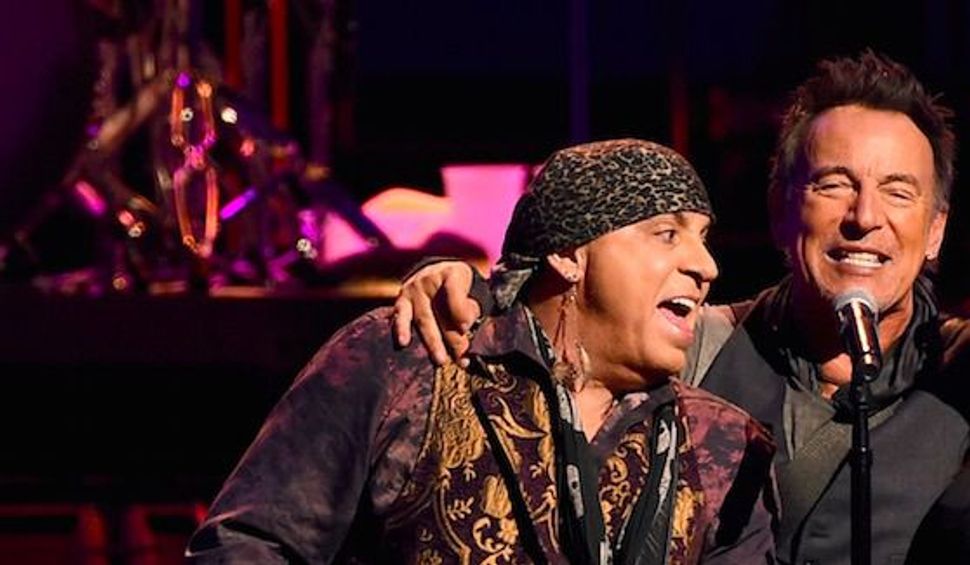 (JTA) — Amid rumors that Bruce Springsteen will perform in Tel Aviv this summer, he and his E Street band have come under fire from supporters of boycotting Israel.

On Monday, band guitarist Steven Van Zandt — who is also known for playing a mobster on HBO’s “The Sopranos” — responded in typically direct style. In a series of tweets, he called Israel boycotters “politically ignorant obnoxious idiots” and suggested to one: “go f— yourself.”

Van Zandt has taken tweet heat before for the unconfirmed show. And he’s not alone among his bandmates.

Bassist Garry Tallent has been heckled by the Twittersphere. And self-described anti-Zionist Stanley Cohen, who has more than 20,000 Twitter followers, went after the Boss himself back in February.

The latest BDS brouhaha emerged unexpectedly from a seemingly unrelated Twitter conversation. On Sunday, a fan bemoaned to Van Zandt Springsteen’s cancellation of a show in North Carolina last month in opposition to the state’s recently enacted “bathroom law” — which targets transgender people by requiring bathroom use according to the gender on a person’s birth certificate.

Another Twitter user then accused Van Zandt of touring other countries “which do much worse.”

Van Zandt responded that he held the U.S. to a higher standard.

In response to a skeptic who said “not buying that one,” the rocker got testy. When someone suggested he “quit justifying #hypocrisy,” Van Zandt got downright mad.

You and the other Israel boycotters are politically ignorant obnoxious idiots. Israel is one of our two friends> https://t.co/jfLX5bAzyc

<in the Middle East. In addition to the fact that a boycott in that case would accomplish nothing. Go get educated. https://t.co/jfLX5bAzyc

After some debate about what makes America so great, and whether it’s OK to call it America, the argument came around to the boycott issue. A user asked why, if Van Zandt gave other countries a pass, had he gotten involved in the movement against South African apartheid with the 1985 protest song “Sun City.” Van Zandt said that was about the U.S. too.

It was our government’s policy keeping apartheid alive. This was unacceptable and we fixed it and took them down. https://t.co/jC1i4yPTH3