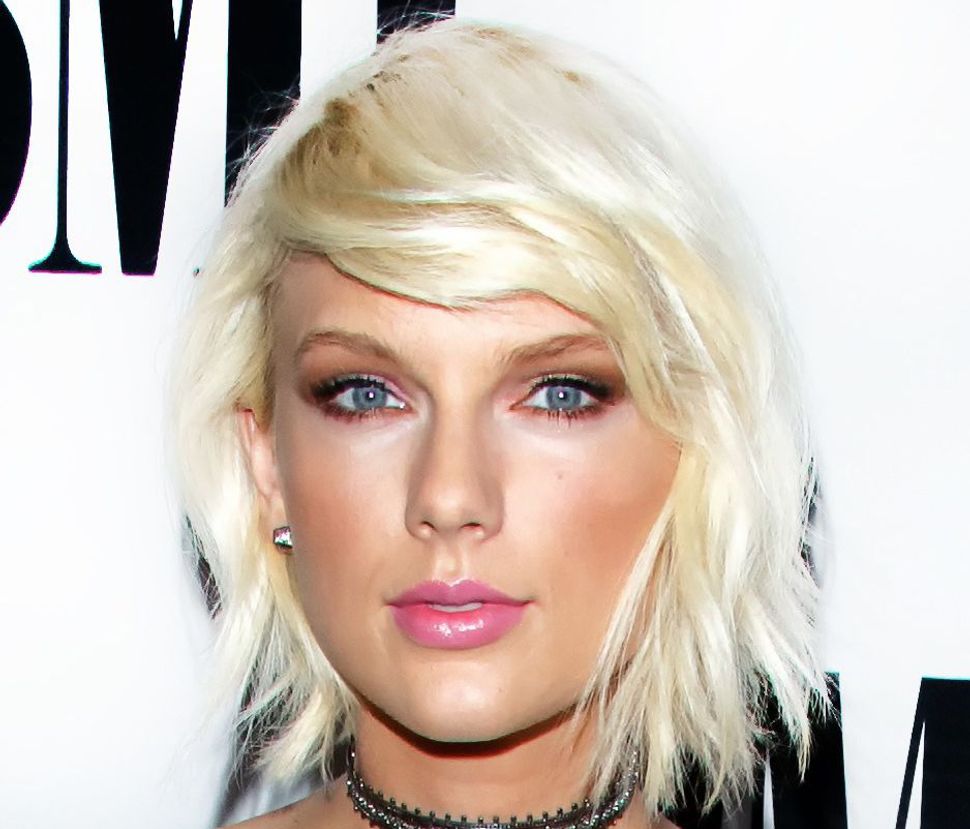 (JTA) — Taylor Swift may look every bit the all-American girl-next-door, but according to white supremacists, she’s actually a Nazi at heart, feeding her legions of followers racist messages coated in the saccharine lyrics and sick beats of Grammy-winning songs.

The Vice blog Broadly explored the extent and origins of that conspiracy theory in a post Monday, speaking to Andre Anglin, a writer of the white supremacist blog the Daily Stormer, about the blond hair, blue-eyed singer’s fascist appeal.

“Firstly, Taylor Swift is a pure Aryan goddess, like something out of classical Greek poetry. Athena reborn,” Anglin said. “It is also an established fact that Taylor Swift is secretly a Nazi and is simply waiting for the time when Donald Trump makes it safe for her to come out and announce her Aryan agenda to the world.” (He provided no evidence of said “established fact.”)

The reference to Trump connects this peculiar meme to the recent political phenomenon of the “alternative right,” more commonly called the “alt-right,” a vague, amorphous subculture that lives online and is defined by its outspoken racist and ultra-nationalist views — and known for its support of the presumptive Republican nominee for president.

But the connection between Swift and Hitler pre-dates the rise of Trump, according to Milo Yiannopoulos, a columnist for the right-wing website Breitbart. Its possible origin is a satirical photo series started in 2013 by teenage Pinterest user Emily Pattinson, who overlaid photos of Swift with Hitler quotes attributed to the singer.

Swift’s lawyers were not amused, demanding Pinterest remove the posts and stating, “The association of Ms. Swift with Adolf Hitler undisputedly is ‘harmful,’ ‘abusive,’ ‘ethnically offensive,’ ‘humiliating to other people,’ ‘libelous,’ and no doubt ‘otherwise objectionable.’”

But neo-Nazis embraced the idea, writing about Swift regularly on the Daily Stormer with the unabashed enthusiasm of high school fanboys, calling her the “Nazi avatar of the white European people,” and fretting that she might “succumb to the Merchant” — meaning give in to the Jews.

There is also a “Taylor Swift for Fascist Europe” Facebook page with nearly 20,000 followers. A recent post read, “Thank you for the continued support. Taylor will Make the Reich Great Again.”

That group is registered as a “comedian” page, which nods to the possible tongue-in-cheek nature of the meme, at least to some. Yiannopoulos acknowledges this point. “Like the alt-right itself, the far-right internet’s love affair with this pop star is predominantly sincere but with a heady whiff of satire and troublemaking,” he wrote.

Then again, when contacted by Broadly, the page’s community manager, who remained anonymous, wrote in an email that while he does not think Swift is sending covert messages through pop songs, he does think she “embodies the Aryan ‘spirit.’”

“To be Aryan in spirit is what completes the fascist,” the community manager wrote, pointing out that Kim Kardashian and Miley Cyrus, for example, do not have the Aryan spirit. In Swift’s case, that “spirit” may refer to the fact that, as Broadly put it, “she comes across as a born conservative but also keeps politics out of her public identity.”

“[Swift] is the anti-Miley,” the Daily Stormer’s Anglin told Broadly. “While Miley is out having gang-bangs with colored gentlemen, she is at home with her cat reading Jane Austen.”

Whether it’s a pop star or a politician, the alt-right clearly knows how to find personalities to amplify their bigotry.