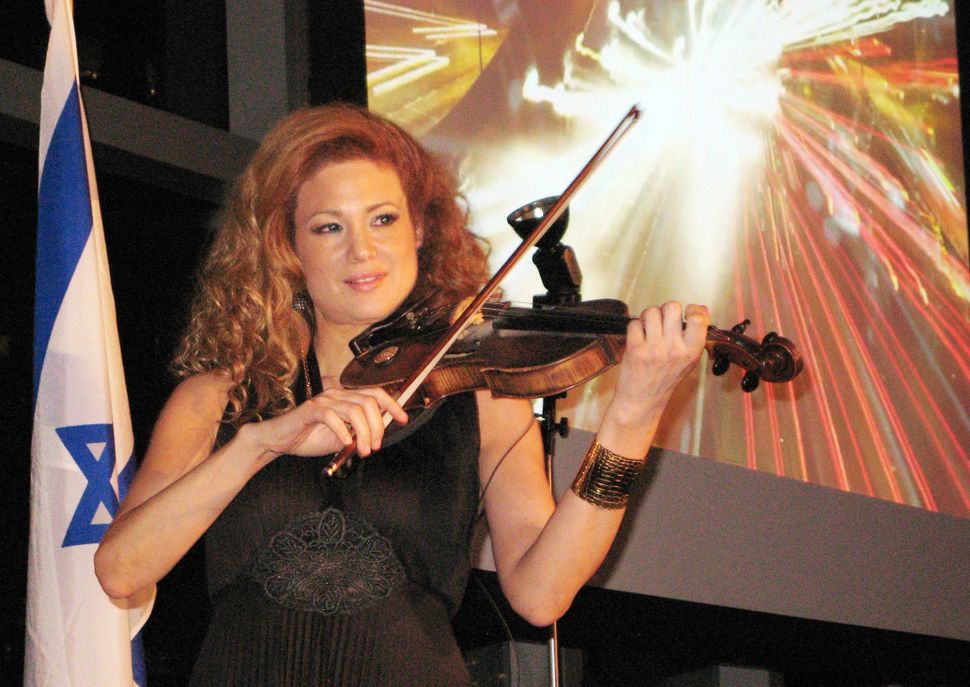 Dan Abrams—emcee at the June 15th American Friends of Soroka Medical Center Gala—told the guests at the Mandarin Oriental that [in Israel] this state-of-the-art medical center has been nicknamed ‘The Iron Dome of Health’ for the one million residents [Bedouin tribes, [Jews] modern and orthodox]. We are here to help build a rehabilitation hospital where people —and particularly soldiers— must regain their strength and become economically functioning…. Soroka is the heart and soul of the Negev—the engine of growth in Israel…. My mother is Israeli. The doctor who saved my life was the husband of Rachel Heisler Scheinfeld [Executive Director of American Friends of Soroka Medical Center.

Tal Brody—(6’ 2”) American-Israel Basketball hero a/k/a ”Israel’s Ambassador of Goodwill” — introduced Grammy-Award-winning, “Goodwill Ambassador of Music for the United Nations” violinist Miri Ben Ari. A 2015 Ellis Island Medal of Honor recipient Ben-Ari— who has worked with Kanye West, Jay Zee, Alicia Keyes, John Legend and last year was honored at the White House as a “Remarkable Woman” by First Lady Michelle Obama, also received the Al Sharpton Martin Luther King Community Service Award as well as the first Dr. Martin Luther King Award from Israeli president Shimon Peres. “I was born in Israel,” said Ben-Ari— CEO of non-profit “Gedenk” (‘Remember “in Yiddish). Stunning in a sexy black gown— with a video montage backup— she laced into an electronic violin excursion prompting Israel’s about-to-depart consul general Ido Aharoni to boast: “Miri is recognized all over the world as one of he most successful Israelis in the field of popular culture.” 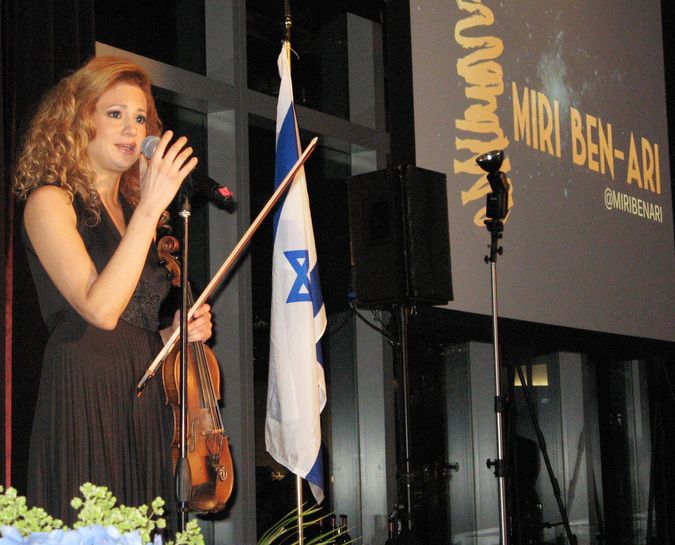 Brody informed: “Martin Luther King’s son was just in Israel to pay tribute to an Israeli guy [Meshulam Riklis] who was very prominent in breaking segregation in the South…taking his father out of jail and integrating his 1200 department stores in the South.”

Touting Brody, Aharoni harked back to Brody and his career as a youngster in New Jersey, when against all conventional wisdom “he decided not to go to the NBA and went instead to play for the Israeli team [Maccabi-Tel Aviv] leading the team to its most unprecedented sporting achievement to date. Facing the Soviet Red Army Team representing 250 million well-equipped, well-trained Soviets, we had a bunch of 2nd 3rd rate college players and amazingly those 12 Israelis were able to defeat the Soviets 91-79! They went on to win the European Championship defeating the Italian team in the finals.” Aharoni added: “Bill Walton [former NBA player] is quoted in Nancy Spielberg’s upcoming movie [‘On the Map’]—which is about Tal Brody and his teammates. He is saying on record, that this is the most amazing achievement in the history of basketball what that [Israeli] team was able to achieve in 1977!”

A nostalgic Aharoni confided: “This is very moving evening for me—one of my last days as Consul General, ending 6 years… [and] before that 4 years as consul for Media [plus] in-between visits. The end of a 15-year chapter in which we tried collectively to change the conversation about Israel so that people like yourselves will not only respond to Israel’s strife and difficulties but also be given a reason to celebrate Israel for its achievements.”

A video tribute to Aharoni showcased Edwina Sands—granddaughter of Winston Churchill—“a greatsupporter of Zionism” prompting Aharoni to note: “what he liked about Zionism from its very inception—a positive, optimistic, movement…about renewal.”

A somber Aharoni concluded: “We are facing a very interesting, disturbing, intimidating type of threat—the hijacking of the original narrative of the Zionist movement. Some call it BDS—don’t use that term! The State of Israel is not being boycotted… what we are facing is far more disturbing than a boycott—a new narrative… It is very convenient to ignore years and years of nation-building, statehood and…the great work being done in the Negev. We are the only country in the world that officially marks the Martin Luther King Day outside the United States. It is incumbent upon us to reclaim the narrative—to celebrate Soroka and its achievement [serving] the Negev….” Among the speakers: Ken Abramowitz, president of Board of Directors American Friends of Soroka and Dr. Iuly Trager, Chief of Rehabilitation Medicine at Soroka.